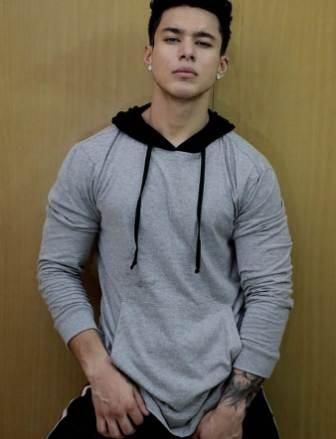 Pratik Sehajpal is an Indian TV Actor, Fitness Trainer, and Model who is known predominantly for working in the Hindi Television industry. He first became popular among people after participating in MTV Love School Season 3. It was a reality show based on young boys and girls. He was liked for his attractive body and tough attitude in the show.

He made his place in the top 6 giving tough competition to the rest of the contestants. However, the winners of the show were Divya Sharma and Lalit. Pratik Sehajpal belongs to a middle-class family and was born on 12 May 1993 in New Delhi, India. He was brought up in Delhi and did his schooling from there. After this, he joined Amity Law School, Noida to complete his graduation.

In the year 2015, he was the winner of the Change in Me fitness competition. He also worked as a motivational speaker and provided fitness training to others through online videos and training on “GM Nutrition”. He has been a fitness trainer at the gym called GM Nutrition. This gym belongs to Indo-American businessman Guru Mann.

Later he shifted to Mumbai to make his career in acting. Where he auditioned for the MTV show MTV Roadies Extreme but he could not succeed. He first came into the limelight when he was declared the first runner-up of the MTV shows Ace of Space in 2018. Recently he was seen in Zee5’s original web series Bebaaki which was released on 30th August 2020 on Zee5.

In this web series, he played the role of Rahil and Kushal Tandon, Shiv Jyoti Rajput, and Kiran Jitwani was also seen with him. In the year 2019, Pratik refused to participate in Bigg Boss 14 as he was busy shooting some other projects. But he joined Bigg Boss OTT telecasted on Voot in the year 2021 as a participant.

For the first time in 2021, Colors TV’s most talked-about show was telecasted on the OTT platform Voot before TV. As soon as Pratik entered Bigg Boss, he started fighting with Divya Agarwal and Shamita Shetty, due to which he made a lot of headlines.

Pratik Sehajpal became the first confirmed contestant of the show Bigg Boss 15 to be aired on Colors TV. He was offered a briefcase by the show’s host Karan Johar in an episode of Bigg Boss OTT and asked to leave the show. Pratik accepted the offer and opened the briefcase which had a ticket for him to be a contestant in Bigg Boss 15.

Pratik Sehajpal’s age is 29 years old in the year 2023. Apart from being an actor, he is also a fitness trainer who is fond of fitness and bodybuilding since childhood. He also started his career as a fitness trainer and nutritionist. Being associated with the field of fitness, he has worked hard to maintain his body.

His body remains the center of attraction in TV shows, which makes her look even better. He does different types of exercises every day in the gym for several hours. Apart from this, he also takes great care of his food and drinks. In addition to eating green vegetables, he likes to drink fresh fruit juices.

He also consumes energy drinks to make his body look more shapely. He has also participated in many bodybuilding competition shows, in which he has also been the winner of some shows. Apart from this, he is also very fond of tattoos and has got many tattoos done on different parts of his body.

Pratik Sehajpal’s height is 5 feet 10 inches, which is equal to 178 centimeters. His body weight is about 82 kg, he takes a proper diet to keep his body fit so his body measurement is 44-34-16. His eye color is Black, and his hair color is also Black.

Pratik was born in Delhi in a middle-class Hindu family. His family believes in Hinduism and also worships Hindu deities. Pratik and his family belong to the Saraswat Brahmin caste. Pratik Sehajpal’s father is an employee in a private firm and his mother’s name is Shailja Sehajpal who is a housewife.

Apart from his parents, Pratik also has a sister named Prerna Sehajpal. Prerna is a makeup artist by profession. Talking about Pratik’s marital status, he is still unmarried. But his affair has been with TV actress and Bigg Boss 14 fame Pavitra Punia. But later Pratik distanced himself from his girlfriend Pavitra Punia for being more possessive.

In an interview, he revealed about his ex-girlfriend Pavitra.

We have only said the truth about each other. She is aggressive, so am I. She is possessive, so am I. She is psychotic, so am I. We loved each other, now we are done with it and moved in our lives. What I will do is take her to the Mandap, holding her hand, and tell Eijaz Bhai (Eijaz Khan) ‘ Lo Bhai Shadi Kar Lo, Tumhari Sampatti Hai Tumhi Rakho Hume Kuch Nahi Chahiye. (please get married. She is your property, keep her with you, I do not have anything to do with her).

Let us tell you that Pratik’s ex-girlfriend Pavitra is 14 years older than him.

Talking about the total net worth of Pratik Sehajpal, his net worth is around ₹3 crores. His main source of earnings is acting in TV shows. Apart from this, he also earns well by advertising and promoting the brand through his social media. In Bigg Boss 15, he is charging around ₹40k for an episode.

He has about 158k followers on Facebook. Pratik is not yet covered by Wikipedia on its page. Pratik’s account is also present on Twitter where he expresses his views through tweets with his 13k followers. In the table below, we have shared the links to all their social media profiles with you, by clicking on them you will be able to access their profile page directly.

Some Interesting Facts About Pratik Sehajpal:

Que. What is the name of Pratik Sehajpal’s girlfriend?

Ans. Pavitra Punia is the name of Pratik Sehajpal’s girlfriend.

Que. Who was the winner of Bigg Boss 15?

Que. What does Pratik Sehajpal do?

This is the full details on Pratik Sehajpal Biography, Age, Height, Father, Family, Wife, Gf, Shows, Roadies, Net Worth & More. Share this post with your friends and keep visiting us on celebwale.com for famous personalities and trending people’s biography with updated details. If you have any thoughts, experiences, or suggestions regarding this post or our website. you can feel free to share your thought with us.