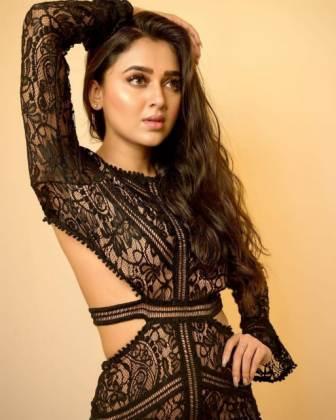 Tejasswi Prakash is an Indian television industry actress who is known for her role as Ragini Maheshwari in the TV serial Swaragini: Jodein Rishton Ke Sur. Tejasswi was born in Jeddah, Saudi Arabia. Her full name is Tejasswi Prakash Wayangankar. His father works in Jeddah as an engineer. After that, she came back to India with her mother and did her schooling in Mumbai.

After passing her high school and intermediate examination with good marks, she took admission to Mumbai University. From there she obtained her B.Tech degree in Electronics and Communication Engineering. She was attracted to acting since childhood and she had the desire to become an actress somewhere in her mind.

However, at the behest of his father, she obtained an engineering degree. After finishing engineering studies, she also tried her luck in the field of acting and auditioned for roles in some serials. She first got a chance to act in Life OK’s crime show 2612. In this crime show, she played the character of Rashmi Bhargava.

In 2018, Tejasswi played the character of Simran in the serial Swisswale Dulhania Le Jayenge 2. In the year 2018, she appeared in the Star Plus serial Karn Sangini as Urvi. In 2019, she appeared as a contestant in the show Kitchen Champion. In the same year 2019, she played the role of Mishti Khanna in the show Silsila Badalte Rishton Ka, which aired on Voot.

In the year 2020, Tejasswi took part in Colors TV’s popular show Fear Factor: Khatron Ke Khiladi as a contestant. In this show, she entertained the audience a lot with her stellar performance. At the same time, her popularity also increased a lot and people started following him in large numbers on social media. She also participated in Bigg Boss 15 in 2021, where she was the winner of the title of Bigg Boss 15. Another contestant Pratik Sehajpal was the first runner-up of the show.

In the year 2017, actress Tejasswi Prakash’s serial ‘Pehredar Piya Ki’ was telecast. In the initial days, the fans liked this serial very much, but gradually due to the story of the serial, the audience was very much infuriated.

Because in this serial, Tejasswi was shown getting married to a just 9-year-old child. This story was not liked by the audience at all. The situation had become such that the show had to be stopped midway.

Tejasswi has won the hearts of the audience with her acting performance in many TV serials. She has also been nominated for award shows many times for her performance but till now she has been deprived of winning the award.

Tejasswi Prakash’s age is 30 years old in the year 2023. She takes special care of her body. As soon as she wakes up in the morning, she first drinks Amla juice, which is very helpful for her body and skin. Apart from this, she loves cycling, as it is very helpful for him to stay healthy and stay fit.

She had said in an interview that “I don’t exercise but I love cycling. It helps me stay healthy and fit. It tones my muscles and helps in smooth blood circulation by keeping the cardiovascular system healthy. does.” She regularly goes out cycling in the morning. Because at that time the air is fresh and pure, which energizes them to work hard.

Fresh air in the morning is helpful in keeping them mentally and physically healthy too. However, when she participated in the Colors TV show Khatron Ke Khiladi as a contestant, she took the help of a trainer to reduce her weight. During that time she used to exercise and meditate a lot to go to the show.

At the same time, she was also taking the help of a trainer to reduce her weight. She was paying special attention to reducing her weight as it would help her to increase the stamina of her body. Apart from this, Tejasswi also takes special care of her food and drink. She likes to take green vegetables in her food and also consumes fresh fruits.

Talking about the marital status of Tejasswi Prakash, she is still unmarried. The news of their affair is available on the internet media. Tejasswi Prakash’s name was associated with TV’s handsome actor Shivin Narang.

Both were seen in ‘Khatron Ke Khiladi’. Not only this, the bonding of both is very much liked by the fans. For this reason, the news of their relationship also came to the fore. However, both of them always consider themselves to be good friends with each other.

Talk about Tejasswi Prakash’s Total Net Worth, their net worth is around ₹5 crores to ₹7 crores. The main way of their earnings is to act in TV serials. Apart from this, she also promotes some brands through her social media. By which she earns good money. In the year 2021, she takes part in Big Boss 15, where she emerged as a winner of the show.

For winning the show she got ₹40 Lakhs as prize Money and got a Bigg Boss 15 trophy. Tejasswi also has a channel on YouTube with more than 363k subscribers. She keeps on uploading some of her personal videos on her YouTube channel, on which millions of views come. She earns more than lakhs of rupees from YouTube.

She is fond of dancing and singing. She loves to travel to Europe and Goa during her holidays. Her favorite places to visit are United Arab Emirates, Switzerland, the USA, and Thailand. In the table below, we have given a list of all his favorite things, which you must read once.

More than 8.5k people on Twitter follow her. In the table below, we have shared the links to all her social media profiles with you, by clicking on them you will be able to directly access her profile page.

Some Interesting Facts About Tejasswi Prakash:

Que. Is Tejasswi a Prakash engineer?

Ans. Yes, Tejasswi completed her graduation in (BE) Electronics and Communication Engineering from Mumbai University.

Que. What is the salary of Tejasswi Prakash?

Ans. According to some reports, Tejasswi is charging 2 lakh per episode in Naagin 6 after winning Bigg Boss 15.

Ans. Yes, Tejasswi is South Indian from his father’s side and she is Marathi from her mother’s side.

Que. Who is the best friend of Tejaswi Prakash?

Ans. Recently, she came very close to Karan Kundrra in Bigg Boss 15. Now, both are in a serious relationship and according to some media reports, they’ll also be married soon.

This is the full details on Tejasswi Prakash Biography, Age, Height, Boyfriend, Family, Net Worth & More. Share this post with your friends and keep visiting us on celebwale.com for famous personalities and trending people’s biography with updated details. If you have any thoughts, experiences, or suggestions regarding this post or our website. you can feel free to share your thought with us.