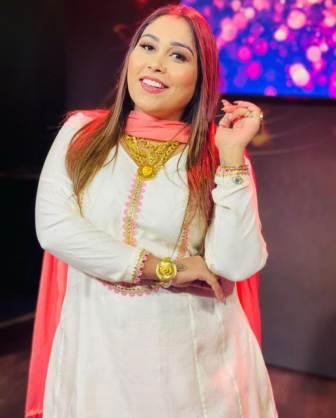 Afsana Khan is an Indian Punjabi Singer, Actress, and Songwriter who is best known for appearing in Bigg Boss 15 as a Contestant. She is a pop singer who has lent her voice to the blockbuster songs Titliaan, Dhakka, and Jodaa. Afsana was born on 13 June 1994 in village Badal of Sri Muktsar Sahib Punjab.

She received her early education from Government Senior Secondary School, Sri Muktsar Sahib. After this, continuing her further studies, she earned a graduate degree from Chandigarh University. Despite being born into a very poor family, Afsana decided to fight against her fate without giving up.

Without any training in singing, her voice is very melodious and it is good to listen to. She used to sing in her village and surrounding areas and gradually her voice was recognized and she became famous at the local level. After this, she got a chance to participate in the singing reality show Voice of Punjab season 3.

Afsana performed brilliantly singing as a contestant on the show and enthralled the judges and the audience with her voice. The songs sung by her in the show were well-received due to which she was able to make her place in the top 5 contestants of the show. After returning from the show, Afsana did not need any introduction in Punjab, people started knowing and recognizing her.

After this, she did one after many shows all over Punjab and sang many super hit songs which became quite popular on YouTube. Afsana got an offer to appear as a contestant in the Hindi television singing reality show The Rising Star Season 1 in the year 2015. However, she did not know or sing Bollywood songs before going to audition for the show.

Later she practiced the Bollywood song Jag Suna Suna Lage for the audition and sang the same song in the audition so that she was selected for the show. Where she made it to the top 7 of the show on the basis of his excellent performance. The songs sung by Afsana Khan are quite popular on YouTube today and fans like her songs a lot.

Afsana Khan’s age is 28 years old in the year 2022. She is a famous Punjabi singer who does not believe in dieting. Her body is very fat and she is fond of eating and drinking and loves to eat Rajma rice. Apart from this, she also likes to eat many Punjabi food items. She is a foodie person who loves to indulge in a variety of delicious dishes.

Afsana was born in a poor Muslim family. Her entire family believes in the Muslim religion and also offers prayers in the court of Allah. Afsana belongs to a musical family where her grandfather and father were good singers. After the death of her father, Afsana started singing at a very young age to support her family.

Since singing was inherited by her, her voice was also very melodious, due to which she became popular in the singing world in a very short time. Today the songs sung by him prove to be a blockbuster on YouTube and get views in billions.

Afsana Khan’s father’s name was Late Sheera Khan. His father died when Afsana was very young. Even today she misses her father very much. Afsana Khan’s mother’s name is Asha Begum and she still lives with him. Apart from his mother, 1 brother, and 4 sisters live in Afsana’s house.

Afsana’s brother’s name is Khudabaksh and he is a great singer who was seen in Sony TV’s singing reality show Indian Idol Season 9. He was also the finalist of the show. Afsana has 4 more sisters named Neetu Khan, Raman Khan, Razia Sultan and Raftaar Kaur.

Her entire family is associated with the field of singing and apart from him, her four sisters are good singers. Talking about Afsana’s marital status, she is engaged and she was also going to get married in November 2021 but after getting offers from Bigg Boss 15, she postponed her marriage.

Now the hope is that when she leaves the Bigg Boss show, she will complete the further process of her marriage. Afsana Khan’s husband’s name, fiance’s name, and boyfriend’s name is Saajz and he is also a Punjabi singer. Afsana and Saajz tied a knot on 19 February 2022 in Chandigarh.

Talking about the total net worth of Afsana Khan, her net worth is around ₹20 crores. Her main source of income is singing. She has worked with many big stars. The songs sung by him are very much liked by the listeners and her songs get millions of views on YouTube.

She is a star Punjabi singer whose songs become viral as soon as it is released, which earns her good money. Apart from this, she also does many shows across the country, for which she charges up to ₹2 lakh. Afsana is also participating in Bigg Boss 15 for which she is charging a hefty fee.

Afsana’s name has also been added to the controversy. She came into controversy for the first time when she went to her hometown school Government Senior Secondary School for the first time after being popular, where she sang her Famous song Dhakka in front of the students. The complaint against them was filed at the police station. Due to this dispute, she had a lot of criticism and was also trolled on social media.

Afsana’s account is present on all social media platforms except Twitter where she keeps sharing the latest photos and videos of singing with her fans. She is present on Instagram where she has around 1.3 million followers and is very active on her Instagram account.

She shares her latest photos and videos only on Instagram where the number of her posts is more than 3.3k. She is also present on Facebook where she has around 330k followers.

Wikipedia has also covered Afsana on its page. In the table below, we have shared the links of all their social media profiles with you, by clicking on which you will be able to access their profile page directly.

Afsana Khan has sung many hits in Punjabi Song, which are quite popular on YouTube today. Afsana’s sung the new song of 2021 is Jodaa, which became quite popular on YouTube and is being liked by the audience. This song has so far received more than 20 million views in 3 days. Actress Mouni Roy and TV actor Ali Goni in the song have played the main role. Below we have given the names of all the songs that you can read once.

Some Interesting Facts About Afsana Khan:

This is the full details on Afsana Khan Biography, Wiki, Age, Height, Family, Husband, Fiance, Net Worth & More. Share this post with your friends and keep visiting us on celebwale.com for famous personalities and trending people’s biography with updated details. If you have any thoughts, experiences, or suggestions regarding this post or our website. you can feel free to share your thought with us.