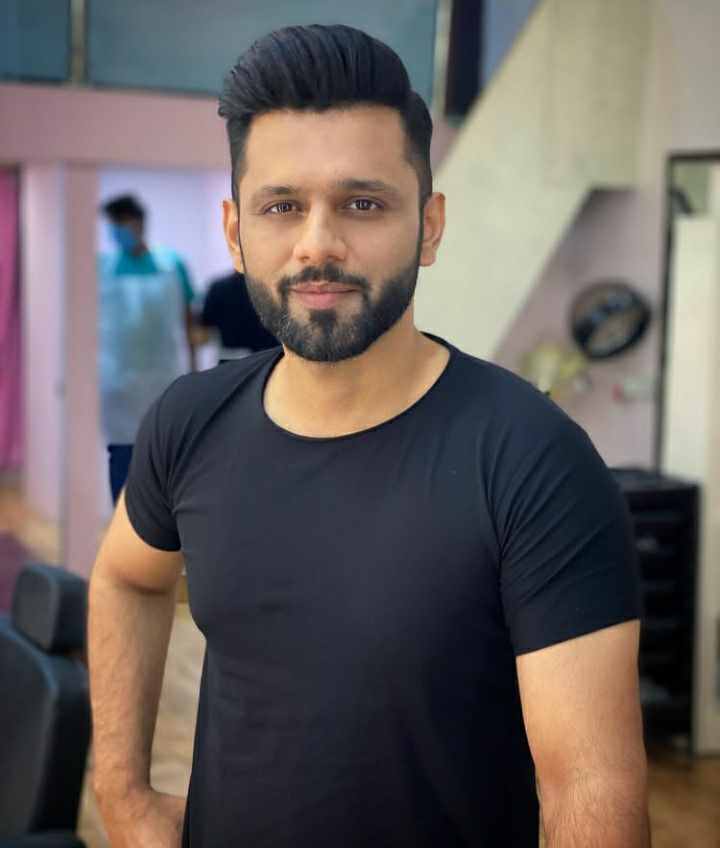 Rahul Vaidya is a well-known Indian singer and music composer. He is famous for participating in the first season of Indian Idol and Bigg Boss season 14. He was born on 23 September 1987 in Nagpur, Maharashtra, India. His full name is Rahul Krushna Vaidya. He completed his schooling at Hansraj Morarji Public School, Mumbai.

Since childhood, he was inclined toward music. During his childhood, when Rahul was singing the bhajan of Lord Ganesha at a local event, his singing talent and ability were first recognized by her mother.

Then it was her mother who inspired him to sing and later Rahul started learning the arts of music from famous Indian singers Suresh Wadkar and Padma Wadkar. Later, he also learned music under the guidance of Himanshu Manocha. In his school, he used to participate in music competitions.

As a Kid, Rahul participated in various reality tv-shows and he has also given his for tv Commercials and Jingles. He would participate in other music competitions as well. Rahul finished his graduation from Mithibai College, Mumbai.

In 2005, when he was in class 12th of his study, then he got the chance to participate in the first season of singing reality TV series Indian Idol where he ended up as the runner-up. The same year, he released his first album “Tera Intezar” composed by Sajid-Wajid.

Thereafter, he sang two duets for the Bollywood film Shaadi No. 1 namely “Hello madam, I am your Adam” with his fellow Indian Idol runner-up Prajakta Shukre and “God Promise Dil Dola” with Shreya Ghoshal. He was the singer of the title song of the drama “Ek Ladki Anjani Si”.

Rahul anchored the show “Jhoom India” in 2007 which was aired on the Sahara tv channel.

In 2008, he participated in the first season of a reality singing tv show “Jo Jeeta Wohi Superstar” which aired on Star Plus where he emerged as the winner. He hosted the show “Aaja Mahi Vay”, a Star Plus show, with his co-host Vinit Singh.

In the year 2009, Rahul moved to Big FM 92.7 where he worked as a radio jockey in this FM channel. He used to host Jhakkas Pachas, a countdown show of top 50 songs. His program was aired every Sunday from 5 pm to 9 pm on BIG FM 92.7 radio channel.

He was one of the members of the team Shankar’s Rockstar in the singing show Music Ka Maha Muqabla”. In the show, his team won the title after beating Shaan’s Strikers in the finale. The show was broadcast on Star Plus.

Rahul sang “Be Intehan” for the Bollywood movie Race 2 in 2013. In 2014, Vaidya released a new song “Vande Mataram” on the occasion of Independence day. The same year, he participated in “Jhalak Dikhlaja” season 7.

He has been the singer of several songs such as “Chunar Chunar”, “Baaton Ko Teri Unplugged”, and “Meri Zindagi”. Vaidya also owns a YouTube channel with the name of “Rahul Vaidya RKV” where he uploads his latest videos.

In 2016, he signed a film “Senapati A Legacy of Blood”, an Indo-Bangladeshi film. He was also one of the contestants in the Bigg Boss season 14 in 2020 where he finished in second place.

The show is being filmed in Cape Town, South Africa. The show will be broadcast on Colors TV. The famous Bollywood film director Rohit Shetty will be hosting this show. The show will start in the month of July 2021.

Rahul Vaidya age is 34 years old in the year 2022 and with his melodious voice, he has spread his rage in many singing reality shows and music videos. Rahul, who has made his mark among the people by participating in Bigg Boss 14 as a contestant, is very conscious about his fitness and health.

To maintain his look, he exercises for hours in the gym daily, whose photos and videos he often shares with the audience on his Instagram page. He is a foodie who loves to eat his mother’s hand dal and rice. He is also fond of eating non-veg food but apart from this, he likes to follow his diet rule to keep his body healthy.

Rahul Vaidya’s height is 5 feet 5 inches, which is equal to 165 centimeters. His body weight is about 74 kg, he takes a proper diet to keep his body fit so that his body measurement is 34-28-12. His eye color is Black, and his hair color is Black.

Rahul Vaidya was born in a prosperous Hindu family, whose entire family believes in Hinduism and Rahul also has deep faith in Lord Ganesha and worships him.

Rahul Vaidya’s father’s name is Krishna Vaidya who is working as an engineer in Maharashtra State Electricity Board and his mother’s name is Geeta Vaidya. Apart from his parents in Rahul’s house, he also has an elder sister whose name is Shruti’s Vaidya.

Talking about Rahul’s marital status, he is married. But if sources are to be believed, he will soon tie the knot. The discussion about his and Disha’s marriage is going on very fast. Rahul and Disha have been with each other for a long time and both are going to get married soon.

The families of both have also made preparations for it. Rahul’s mother had told that she has also met Disha’s family members and is completely ready for the marriage of both. Let us tell you that the last year 2020 in the 14th season of Bigg Boss, Rahul proposed Disha.

He met Disha for the first time in the year 2018 through a common friend. After that, both became friends and started hanging out together often. Slowly both of them understood each other and then started falling in love with each other.

In an interview, Rahul told about Disha that she is a normal girl, she is also very kind and I like her qualities a lot. A few days ago I had a music concert in Pune, so invited him to accompany me on the flight. Since we are best friends, so only thought of spending quality time with each other. I don’t know what is written in our fate?

Eventually, Rahul and Disha got married on 16 July 2021. On this special occasion of marriage, Rahul’s best friend Ali Goni was also with him. On July 14, there was a function of Mehndi of Rahul and Disha in which Disha wore a pink and white color gargle.

Talking about Rahul’s favorite things, his favorite Bollywood actor is Salman Khan and Shahrukh Khan, and his favorite actresses are Shraddha Kapoor and Alia Bhatt. He is a singer by profession, so his favorite song is Abhi Na Jao Chodkar Ke Dil Abhi Bhara Nahi sung by legendary singer Mohammad Rafi.

His favorite singers are Sonu Nigam, Sajid Wajid, and Alka Yagnik. His hobby is singing. In the table below, we have given a list of all his favorite things, which you must read once.

Talking about the total net worth of Rahul Vaidya, his total earnings range from ₹70 crores to ₹80 crores. He is known for living his luxurious life. He has around 5 luxury cars like Mercedes and Audi.

Sometimes he travels to his destination by booking private jets for his shows. Singing is his only profession. He has been a participant in various singing reality shows where he used to charge up to ₹1 lakh per episode.

Rahul has done a total of more than 1500 shows, events, and live concerts so far, he participates in about 125 shows in a month. Rahul earns a lot of money from all these shows and concerts.

Because Bigg Boss is broadcast from the month of October to March and he is very busy with his live shows, concerts, and events during all these months, he does not get time to participate in Bigg Boss.

But last year when the whole world was closed due to Covid-19, due to that all the celebrations were stopped all over the country and abroad, due to which he had a lot of time, then he accepted the offer of Bigg Boss. had participated in the program.

He was considered a strong contender to win the show, but he was chosen as the first runner-up of the show. Rahul used to charge up to ₹1 lakh per week for this show. In the year 2021, the second wave of Covid-19 has again wreaked havoc in the country, due to which lockdown has been imposed again across India, and the gathering of people has been banned in all kinds of events and ceremonies.

Due to this, as Rahul has no event offers, he has gone to Cape Town to participate in Colors TV’s most popular show Khatron Ke Khiladi where the shooting of the show is going on. If sources are to be believed, Rahul is the highest paid contestant of this season of Khatron Ke Khiladi.

Sources close to the show have told to that Rahul is being paid a hefty amount for the show. He is the highest-earning contestant this season. This popular singer is apparently being paid ₹15 lakh per episode.

Apart from all this, Rahul has also created his own YouTube channel, by monetizing it, he is earning lakhs of rupees. He keeps on launching his latest music videos on his channel which has millions of views. He has also worked in many music videos, for which he keeps charging a good amount.

Rahul Vaidya’s account is present on all social media platforms where he keeps sharing his upcoming projects and latest photos and videos with his fans and followers. He keeps updating his fans every day through his social media.

Apart from this, Wikipedia has also covered them on his page, whose link we have shared. Rahul has also created his own Youtube Channel named RAHUL VAIDYA RKV on which he keeps uploading his latest music videos.

His Youtube channel has more than 832k subscribers, and his videos have millions of views. In the table given below, we have shared all their social media links with you, by clicking on which you will be able to access their profile page directly.

Rahul has not only won the hearts of people with his singing talent, but along with this, he has also won many awards for his talent. The year 2019 was an award year for him. This year he won more than 4 awards for his singing.

Rahul won the Indian Television Award in the Best Music category followed by Best Singer then the Live Quotient Award in the Wedding & Social Events-Male category. He also won the Celeb-M Award for Iconic Performance. In the table below, we have given all his awards, which you can definitely read once.

Some Interesting Facts About Rahul Vaidya:

This is the full details on Rahul Vaidya Age, Wife, Family, Biography, Net Worth & More. Share this post with your friends and keep visiting us on celebwale.com for famous personalities and trending people’s biography with updated details. If you have any thoughts, experiences, or suggestions regarding this post or our website. you can feel free to share your thought with us.