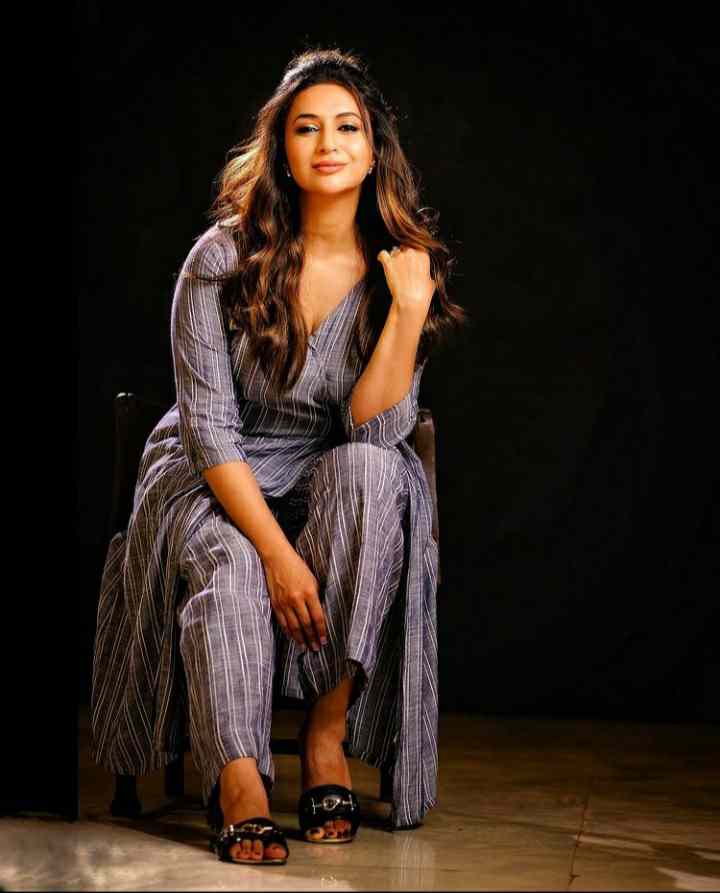 Divyanka Tripathi Dahiya is an Indian television actress known for her role doctor Ishita Iyer Bhalla in the TV serial Yeh Hai Mohabbatein. She was born on 14 December 1984 in Bhopal Madhya Pradesh.

She had taken education early in her career in Bhopal itself. She passed her high school and intermediate examinations from Carmel Convent School, Bhopal.

She used to participate in competitions like Drama, Play, and Telefilm during her schooling from childhood. After receiving her intermediate education, she took admission to Sarojini Naidu Government Girls PG College, Bhopal to pursue her graduation. She received her graduation from this college.

During this period, Divyanka made her first job as a host at All India Radio during her studies, where she used to get only 800 rupees as salary. She was quite adventurous in her younger days, where she also completed a mountaineering course from the Nehru Mountaineering Institute in Uttarkashi, Uttarakhand.

Tripathi’s father wanted him to be a part of the National Cadet Corps NCC, for which she got admission to Bhopal Rifle Academy. In the academy, she was a gold medalist in rifle shooting, after which she started aspiring to become an army officer. Before she even got close to wearing a military uniform, she got a chance to anchor in a few shows, which changed the course of her life and career.

From the moment she first made headlines, she was attracted to the natural instinct for acting. In the year 2003, she won the Miss Beautiful Skin crown in the Miss Teen contest organized by Zee Television Channel.

She also won the Miss Bhopal competition. In the year 2004, she participated as a contestant in India’s Best Cinestar Ki Khoj competition.

Even though she could not win this competition. But this talent search competition opened the doors to the small screen for him. She believes that this gave him the confidence to overcome stage and camera fears. After the competition, she started anchoring in television and radio shows in Bhopal. She started her television career with Doordarshan’s Daily Soap.

This was followed by a double role in Zee TV’s serial Banoo Main Teri Dulhann, which made him the star of the small screen overnight. Divyanka says that when she was first invited to Mumbai to audition for the role of Vidya, she did not believe it, she thought it was a joke or mischief that someone has done to her. But she accepted it and followed suit and went to Mumbai with her parents.

On reaching Mumbai, she was pleasantly surprised to see that people gave him good reactions. After auditioning, Divyanka was selected for this serial of Zee TV. However, working in serials was completely new to him, for which she worked determinedly and had a pleasant experience of success. From this serial, she played Vidya and Divya opposite actor Sharad Malhotra, who became popular in the house.

In 2013, she appeared with his opposite actor Karan Patel in Ekta Kapoor’s TV serial Iss Pyar Ko Kya Nam Du. Divyanka played the role of Ishita Bhalla in the serial which touched new heights of success. She was very famous for this role and her acting was also appreciated by the critics. Due to the performance given in this role, she has won many awards.

In the year 2014, Divyanka won the Indian Tele Award for Best Actress in a Lead Role and in the same year, she also won the Gold Awards for Boroplus Face of the Year.

Apart from this, she had more than 5 titles for this show. The show continued to air on TV for a long span of 6 years and in the year 2019, its last episode was aired on TV.

In the year 2017, Divyanka participated in Nach Baliye 8 as a contestant with her husband Vivek Dahiya, where she was the winner of the show and to win the show she received cash of ₹25 lakh as the winning amount of the show.

Tripathi has also appeared in many TV ads, currently, she is seen in a TV ad with Bollywood superstar Amitabh Bachchan in Ghadi Detergent Powder. In the year 2021, Divyanka is going to be seen in Colors TV’s most popular show Fear Factor: Khatron Ke Khiladi.

Divyanka Tripathi Dahiya’s age is 37 years old in 2022. In 2014, she was ranked 23rd out of 35 Warmest Actresses of Indian Television by Indian Lifestyle Menxp[dot]com. Their physical appearances are very hot and attractive which makes them different from others.

She takes special care of her body and exercises daily in the gym for hours. Apart from this, Tripathi also takes very special care of her health and in addition to consuming nappy meals and nutritious food every day, she also keeps taking fruit juices so that she can stay healthy.

Divyanka Tripathi Dahiya’s height is 5 feet 5 inches, which is 167 cm. Her bodyweight is 65 kg and Divyanka’s body measurement is 34-30-34. Her eye color is black and her hair color is Dark Brown.

Talking about her love affair, she had an affair with Sharad Malhotra before marrying Vivek, which lasted for about 9 years. Divyanka started her TV career with the Zee TV serial Banoo Main Teri Dulhan. In this serial, she was acted with Sharad Malhotra. It was during this show that Divyanka gave heart to Sharad.

Divyanka and Sharad had dated each other for almost 9 years and both of them used to be very favorite and famous. But after 9 years of relationship, in 2015 the two parted ways.

After their separation, it was revealed that Sharad was cheating on Divyanka. When Divyanka joined Rajiv Khandelwal’s chat show Jazbaat, she had an open conversation with Sharad about the breakup.

Where she told that she was completely broken after the breakup with Sharad. She had been dating Sharad for a long time and was confident that their relationship would go to an end. But this did not happen.

“I had tried everything to get Sharad again and I had even gone to the level of superstition. There came a time when I started feeling that if I had to do so much to get someone’s love, is it, love? Better than this, it is better to be alone. Then I stopped myself but took some time to recover from this situation.“

Divyanka and Vivek had told in their wedding that both of them were introduced by a fan. The two went to a party once, from a group photo where the fans cropped the photo of Divyanka and Vivek and gave it the name of Divek.

Since then, the love between the two started to flourish. After this, in July 2016, the two got married with the consent of the family. Divyanka and Vivek were married in Bhopal in which many TV actors also attended. After this, both of them had a reception in Chandigarh and another in Mumbai.

Both are now living a happy life and the pair of both also like the fans a lot. Divyanka and Vivek have not planned any children yet. So they do not have any son or daughter yet. But we hope both will become parents soon.

Talking about the total net worth of Divyanka Tripathi Dahiya, she has entertained people a lot with her acting, which also earned her a good amount. She is a very popular actress in the TV industry who charges around ₹1 lakh to ₹2 lakh per episode. Their total net worth ranges from around ₹25 crore to ₹30 crores.

She became the first Indian television actress in 2017 to be ranked 72nd out of the top 100 by Forbes Indian Celebrity. This list of Forbes India is a list prepared on the basis of the income and popularity of celebrities in India.

Her main sources of earnings are TV serials, films, TV brands endorsement, and social media brands promotion. Apart from this, she also earns a lot of money from TV commercial aids.

She also earns a lot of money through sponsor posts on her Instagram page. They also have a luxurious house in Mumbai where all the amenities are available. Apart from this, they also have many luxury cars.

In 2021, Divyanka Tripathi Dahiya took part in the Colors Tv much-awaited show Fear Factor: Khatron Ke Khiladi Season 11. In this show, she has been charging ₹10 lac per episode as a fee. Earlier, the shooting of the show has been completed in Capetown and telecasted soon on Colors Tv and Voot Select app.

Apart from this, she is also very fond of listening to songs, she likes to listen to songs by Kailash Kher and Shubha Mudgal. In the table below, we have given a list of all their favorite things that you must read once.

Divyanka Tripathi Dahiya’s account is present on all social media platforms where she keeps sharing information about her TV serials and shows with her fans and followers.

She is very active on social platforms such as Instagram, Facebook, and Twitter. Where her followers number 14.5 million, 7 million, and 412.5k respectively. The number of posts on her Instagram page is up to around 2550.

On all three platforms, there is a verified tick on their page, so that you can easily find their original account. Divyanka Tripathi Dahiya has also been covered by Wikipedia on her page. In the table below, we have shared all their social media links with you, by clicking on which you will be able to access their profile page directly.

This is the full details on Divyanka Tripathi Dahiya Age, Family, Husband, Biography, Net Worth & More. Share this post with your friends and keep visiting us on celebwale.com for famous personalities and trending people’s biography with updated details. If you have any thoughts, experiences, or suggestions regarding this post or our website. you can feel free to share your thought with us.