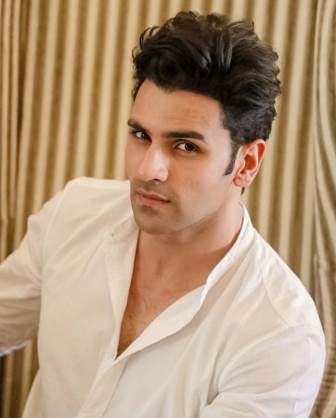 Vivek Dahiya is an Indian television actor, known for his role as ACP Abhay Singh in the TV serial Yeh Hai Mohabbatein. He was born in Chandigarh. He completed his early education at St. Stephen’s College located in Chandigarh. He later went to England for his higher studies where he joined De Montfort University. He holds an M. Sc degree in International Business Management.

During his college days, he used to do theater but he had no intention of getting into the acting field, due to which he started working in an IT corporate company in England itself. While touring India for some of his work, he got a modeling offer, which he could not refuse. During modeling, his desire to make a career in the entertainment industry increased.

He won the title of Mr. Chandigarh in 2011 after which he shifted to Delhi. After shifting to Delhi, he did print ad shoots and ramp walks for many brands. Later he shifted to Mumbai to make a full-time career in acting, after which he started auditioning for roles in serials. In the year 2013, he got his first break in the TV serial Yeh Hai Aashiqui in which he played the character of Devesh.

His character in this serial got the love of the audience due to which he got an opportunity to play the role of Inspector Rajveer Thakur in the serial Ek Veer Ki Ardaas Veera. He played the role of a bad cop in this serial, in which he misuses his power to kill a character of the serial. After which he started receiving threatening calls. Referring to this incident in an interview, he said that

“I remember playing this bad cop in a show (Veera) who would misuse his powers and put the male lead into trouble. I used to get many hate messages. I had killed someone on the show and the audience took it for real. So, this one guy threatened me that if I’m seen anywhere outside he’ll get me beaten up. I took it to my confidence that I must have done a decent job for them to feel the angst against me,”

In 2015, he played the character of Inspector Abhishek Singh in the serial Yeh Hai Mohabbatein which proved to be the turning point of his career. In 2016, he appeared in the role of Rajbir Bundela in the serial Kavach Kali Shakti Se. He got a lot of fame for this role he played. In 2017 he participated in the dance reality show Nach Baliye 8 along with his wife Divyanka Tripathi Dahiya where he was the winner of the show.

In 2018, he appeared in the serial Qayamat Ki Raat as Rajvardhan Singh Suryavanshi. Apart from working in TV serials, he has played the character of Captain Rohit Bagga in Zee5’s web series State of Siege: 26/11 in 2020. In 2022, he is seen as Rajbir in another Zee5 web series Pavitra Rishta 2.

Vivek Dahiya’s age is 38 years old in the year 2023. He is a popular actor in the Hindi television industry who is very conscious about his fitness. He likes to stay fit and follow a strict diet routine. Apart from this, he is also a member of 24 Hours Gym who never misses a workout. He is very hygienic and is always possessive about cleanliness.

Vivek Dahiya’s height is 5 feet 11 inches, which is equal to 180 centimeters. His body weight is about 78 kg, he takes a proper diet to keep his body fit so that his body measurement is 42-33-15. His eye color is black, and his hair color is black.

Vivek Dahiya was born in an upper-middle-class Hindu family. His entire family worships Hindu deities and believes in Hinduism. Vivek Dahiya’s father’s name is CR Dahiya, his mother’s name is Manju Dahiya. Apart from his parents, he also has a younger sister named Riya Dahiya in his house.

Vivek’s marital status is Married. He got married to his girlfriend Divyanka Tripathi on 8 July 2016. Both Vivek and Divyanka met for the first time on the set of the serial Yeh Hai Mohabbatein where Divyanka fell in love with Vivek at first sight. After this, both of them tied the knot after dating for a few years.

Vivek Dahiya’s total network total is around ₹ 10 crores. His main source of earning is from acting in television serials and web series. Apart from this, he also promotes the products of some brands through his social media, for which he charges up to lakhs of rupees.

Vivek’s account is present on all social media platforms where he keeps sharing his photos with his fans. He also has an account on Instagram where he is followed by about more than 1.7 million people and the number of his posts is more than 2k.

Some Interesting Facts About Vivek Dahiya:

Ans. Vivek was born in Chandigarh in a Hindu family.

Que. What is the age of Vivek Dahiya?

Que. Where is from Vivek Dahiya?

Que. How did Vivek and Divyanka meet?

Ans. Vivek and Divyanka were met for the first time on the set of the serial Yeh Hai Mohabbatein.

This is the full details on Vivek Dahiya Age, Height, Biography, Family, Wife, Net Worth & More. Share this post with your friends and keep visiting us on celebwale.com for famous personalities and trending people’s biography with updated details. If you have any thoughts, experiences, or suggestions regarding this post or our website. you can feel free to share your thought with us.