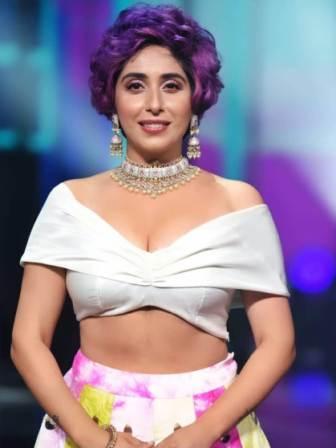 Neha Bhasin is a multilingual singer and singer known for singing songs in Hindi, Tamil, Telugu, and Punjabi languages. She has sung Indian pop and Punjabi folk music genre songs in Bollywood, Tollywood, and Kollywood industries. Neha was born on 18 November 1982 in New Delhi, India. She did her early schooling at Frank Anthony Public School, New Delhi.

Being interested in songs since childhood, she started taking interest in music and started participating in many singing competition shows right from her school days. At the age of 9, she won her first singing competition show by singing the song Hero by Mariah Carey. She wanted to become a pop star from her school days, for which she also took vocal classical training from Ustad Ghulam Mustafa Khan during her college days.

After completing her high school and intermediate, Neha graduated from Lady Sri Ram College, Delhi. During her college studies, she took training in singing as well as received training in various dance forms from Shiamik Davar Dance Academy. Bhasin auditioned for Coke (V) Popstars organized by Channel V during his college days. After getting selected for the audition, she won the competition to form India’s first all-girls viva (band) along with 4 other girls.

She was associated with this band for about 2 years and after the breakup of the band in the year 2004, she started singing in the Bollywood film and Tamil film industries. In the year 2005, Neha Bhasin started her career with the title song of the Bollywood film Bullet -Ek Dhamaka. In 2006, she lent her voice to the song Ek Look Ek Look from the film Aryan.

The following year she has sung the title song of the 2008 Bollywood film Hari Puttar. But she got recognition in the music industry with the song Kuch Khas Hai from the Bollywood film Fashion released in 2007. This song sung by Neha became quite popular in those days. In the same year 2008, she started her television career by hosting the music competition show Sa Re Ga Ma Hungama.

Neha Bhasin also made her debut in the Telugu music industry with the song Atu Nuvve Itu Nuvve from the Telugu film Current, released in the year 2009. After this Neha Bhasin sang famous Bollywood songs like You & Me, Dhunki Dhunki, Asalaam – e – Ishqum, Aankhein Milayenge Darr Se, Jag Ghoomeya, Swag Se Swagat, Dil Diyan Gallan, Shuru Kar, Heeriye, and Chashni. She has also been an anchor and judge in the 2009 telecast show Sitaron Ko Choona Hai.

In the year 2012, Neha Bhasin started her career as an actress by acting in the Bollywood film Life Ki Toh Lag Gayi. Bollywood actors KK Menon and Ranveer Shorey were also seen with her in this film. In the same year 2012, she participated in Colors TV’s dance reality show Jhalak Dikhhla Jaa Season 5 as a contestant through a wild card entry. In the year 2016, she made her debut in the Punjabi music industry by singing the song Paani Ravi Da from the Punjabi film Lahoriye.

Apart from this, she has appeared as a guest in television shows like Oye Firangi (2017), Entertainment Ki Raat (2018), The Kapil Sharma Show (2019), and Indian Pro Music League (2021). Although Neha is known for working in India, she has also worked at the international level. She collaborated with Malaysian hip-hop star Emcee Jesz for the song THANIYE.

The song was well received by the audience and had more than 300,000 views on YouTube. This collaboration of his was also nominated in the Best Collaboration category of the Radio Raga Awards held in Malaysia in the year 2008-09. She was seen as a contestant in Bigg Boss OTT which was being aired for the first time on the OTT platform Voot, and the show was hosted by Karan Johar for the first time.

Neha Bhasin’s age is 40 years old in the year 2023 and is a pop Bollywood singer in the industry. Talking about her fitness, when she came out from the home to make her career, she was only 49 kg and she did not complain about her body. But as time passed, she did not take care of her body at all, due to which her body weight increased.

Due to weight gain, she also had to be a victim of body shaming many times. Neha told in an interview that earlier she was called fat and her stomach was shown by a circle on television. She also told that she was embarrassed by this because she was in depression due to an eating disorder at that time.

Neha Bhasin was battling a food disorder disease like PMDD (Premenstrual dysphoric disorder). Neha got rid of this disease with her discipline and strict diet training. Neha is a great pop star singer and her look and style are very important for a pop star. This is the reason that now she does very rigorous fitness training to keep herself fit and along with this she also follows a healthy diet plan.

Neha Bhasin was born in an upper-middle-class Punjabi Hindu family. Her entire family believes in Hinduism and worships Hindu deities. Neha Bhasin’s father’s name is Ashok Bhasin and her mother’s name is Rekha Bhasin. Apart from her parents, she also has an elder sister and a younger brother, whose names are Rashi Bhasin and Anubhav Bhasin respectively.

Her closeness started growing with another contestant Prateek Sehjpal of the show itself. The strong bonding between both could be seen in the show. In the show, when Nishant Bhat asked Neha about her relationship with Prateek, she clearly said that we have a very strong bonding with each other and I would have dated Prateek if I was not married.

Talking about Neha Bhasin’s total net worth, her net worth ranges from around ₹12 crores to around ₹15 crores. Neha’s main source of earning is singing. She is mainly known for singing songs in Bollywood and Tamil films for which she charges good money. Apart from this, she also appears as an anchor and contestant in many TV shows where she charges lakhs of rupees every week.

Bhasin also charges lakhs of rupees by doing her live concerts in the country and abroad. This year she joined Bigg Boss OTT of Colors TV’s popular show Bigg Boss in 2021 where she had charged up to ₹2 lakh per week. She showed her great game in the show and finished 6th. Now Neha Bhasin is also participating in Bigg Boss 15 as a contestant through wild card entry where she is charging around ₹3 lakh per week.

Neha Bhasin is a top-class singer who wins the hearts of millions of people with her melodious voice. In the year 2007, she won the Vijay TV Awards in the Best Playback Singer Female category for her Tamil debut song Pesugiren Pesugiren. She won the Stardust Award in the Musical Sensation of the Year category for the song Dhunki from the Bollywood film Mere Brother Ki Dulhan released in the year 2011.

By the way, Bhasin has been nominated for many awards based on her brilliant singing. Apart from Hindi and Tamil songs, she has also received the South Indian International Movie Awards in the category of Best Female Playback Singer for the Telugu song Aww Tuzo Mogh Kortha. Although she won the most awards for the song Jag Ghoomeya in the Bollywood film Sultan.

She won prestigious awards like Stardust Awards, Filmfare Awards, Zee Cine Awards, and Femina Women in 2016 for the song Jag Ghoomeya. Bhasin won the Filmfare Awards in the year 2018 for her only Punjabi song Paani Ravi Da. In the table below, we have given a list of all his awards, which you must read once.

Neha Bhasin’s account is present on all social media platforms where she keeps sharing her photos and information about new songs with her fans and followers. She is known for her glamorous and hot photos on Instagram. She has a total of more than 728k followers on Instagram and her post is more than 3.9k. She is a social media star with more than 2.3 million followers on Facebook.

Neha Bhasin is also covered by Wikipedia on its page. She is also present on Twitter where she keeps sharing her views through tweets with 1.2k followers. Bhasin also has a YouTube channel that has more than 457k subscribers and keeps on uploading new songs on the YouTube channel. In the table below, we have shared the links to all their social media profiles with you, by clicking on them you will be able to access their profile page directly.

Some Interesting Facts About Neha Bhasin:

This is the full details on Neha Bhasin Biography, Wiki, Age, Family, Husband, Religion, Net Worth & More. Please share this post with your friends and keep visiting us on celebwale.com for famous personalities and trending people’s biography with updated details. If you have any thoughts, experiences, or suggestions regarding this post or our website. you can feel free to share your thought with us.