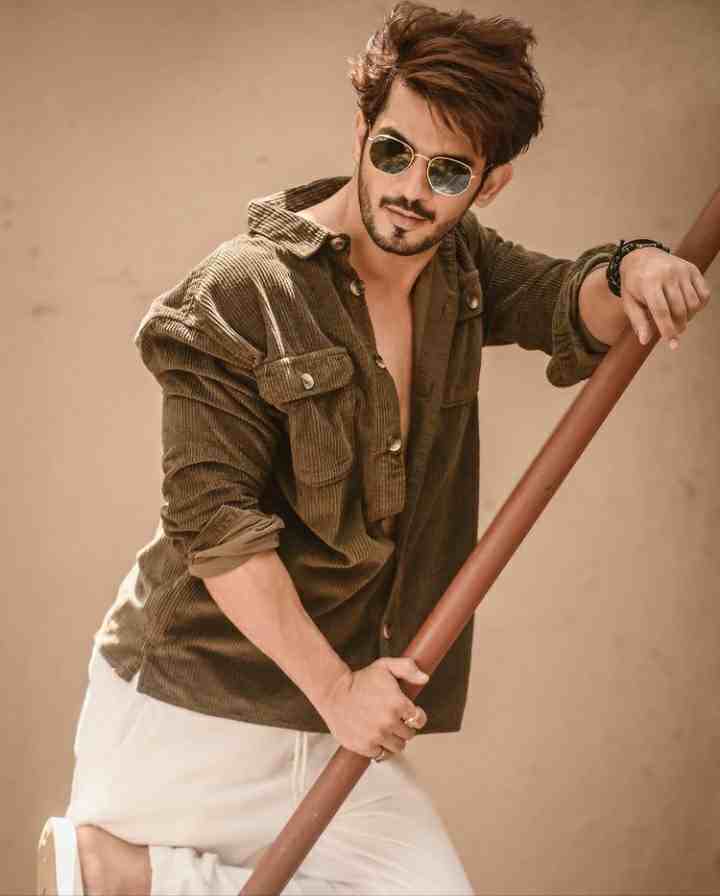 Arjun Bijlani is an Indian television actor as well as a film actor. He was born on 31 October 1982 in a Sindhi family in Mumbai, Maharashtra, India. He completed his school education at Bombay Scottish School, Mahim, Mumbai. In school, he used to be a proactive student.

He finished his graduation from H.R. College of Commerce and Economics, Mumbai. His father died when he was just 19 years of age. On 20 May 2013, He got married to his girlfriend Neha Swami. They became parents on 21 January 2015 to a baby whom they named Ayaan Bijlani.

In this show, he played the supporting role only. He was noticed by the audience when he played the role of Cadet Aalekh Sharma in an action-based television drama “Left Right Left” that aired on SAB TV.

Subsequently, Bijlani played the role of a rich fun-loving guy Sanjay in a Deepti Bhatnagar period drama “Mohe Rang De” which was broadcast on Colors TV. The show started on 21 July 2008 and lasted on 6 March 2009.

In 2008, he performed acting in a TV show “Miley Jab Hum Tum” where he played the role of Mayank Sharma. This was his first show where he was the leading actor and the show broke some records in TRPs.

In 2009, he played the role of Chandrakant Bhosale in a TV show Pardes Me Mila Koi Apna opposite Bhavana Khatri, and the show was broadcast on Imagine TV.

In 2012, Arjun hosted a reality talk show “Dell Inspiron Road Diaries” of UTV Bindass. The same year, he did a TV serial “Teri Meri Love Stories” and a short film “Full Phukre”. He did two short films in 2013 namely “I guess” and “Caught in the Web”.

Thereafter, he appeared in a television series “Kaali – Ek Punar Avatar” opposite Aneri Vajani. “Chintu Ban Gaya Gentleman was his next series in the same year where he performed his acting.

He entertained the audience with his acting in a comedy-based drama “Jo Biwi Se Pyaar Kare” on SAB TV. He also played Box Cricket League in 2014.

He exhibited the talent of his acting in Balaji’s Telefilms romantic television drama series “Meri Ashiqui Tumse hi” in 2015. Arjun quit this show in August 2015 for Naagin.

In September 2015, he accepted the lead role in “Naagin”, a thriller show by Balaji Telefilms. This show turned out to be a gem in his career and provided a great height to his career. Naagin was telecast on Colors TV and gained high TRPs. Finally, it ended on 5 June 2016.

Arjun Bijlani made his Bollywood debut with the film “Direct Ishq” in 2016, co-starring Rajnish Duggal and Nidhi Subbaih. The film was not successful at the box office. In 2016, he was one of the participants in the dance tv show Jhalak Dikhlaja but got eliminated later on.

In 2016, he was offered many roles back to back in several tv series like Kavach…Kaali Shaktiyon Se, Naagin season 2, and Pardes Me hai Mera Dil.

In 2017, Bijlani was offered a role in a tv show Ishq Me Marjawan by Beyond Dreams Entertainment. He accepted this role. The show was aired on Colors TV and obtained good TRPs.

He anchored Dance Deewane 2 aired on Colors Tv in 2019. Apart from television and movies, he featured in a music video Kehndi Haan Kehdi Naa in January 2020.

Arjun Bijlani made his debut on the digital platform with a web series State of Siege: 26/11 distributed by Zee5 in March 2020. Ishq Tanha was another music video produced by Inde Music Label in the same year.

In 2021, he participated in a stunt-based adventurous reality tv show Fear Factor: Khatron Ke Khiladi which is being filmed in Cape Town, South, Africa.

The show will be broadcast on Colors TV and hosted by well-known Bollywood director Rohit Shetty. The show will start in the month of June 2021.

Arjun Bijlani’s age is 39 years old in the year 2022, but he looks very smart due to his excellent fitness. He works out for hours in the gym every day, due to which his body looks very fit and great.

Apart from exercising for hours in the gym, he consumes green greens, vegetables, and fruit juices. He likes to eat nutritious things in food, which keeps his body fit.

Arjun Bijlani’s height is 5 feet 8 inches, which is equal to 173 centimeters. His body weight is about 74 kg, he takes a proper diet to keep his body fit so that his body measurement is 38-30-13. His eye color is Dark Brown, and his hair color is Black.

Arjun Bijlani was born in a Sindhi family in Maharashtra. He believes in Hinduism and also worships Hindu deities. His father died when Arjun was 19 years old. Since then Arjun is handling all the responsibilities of his house. His father’s name was Sudarshan Bijlani and her mother’s name is Shakti Bijlani who lives with him.

Apart from her mother in Arjun’s family, there is also a younger brother named Niranjan Bijlani. Talking about Arjun’s marital status, he is married and her wife’s name is Neha Swami, who is an actress in the television industry. Arjun’s marriage was not an arranged marriage, he fell in love with Neha at first sight.

Their love story is very long in which both of them had first romance, engagement, and then married. There was true love in their love story and they managed their relationship in the best way and took it to the point of marriage.

Let us tell you that Arjun and Neha met at a party. Arjun, who became a star of the TV industry with Star One channel’s famous show “Miley Jab Hum Tum”, was attracted to the beautiful Neha as soon as he saw her. A common friend introduced them to each other.

Arjun Bijlani was impressed by Neha’s simplicity. Arjun realized that he was in love with Neha at the same time, but Neha took time as a sensible person, and then later she said yes to Arjun.

Later Neha said about the first meeting with Arjun that “It was love at first sight for Arjun. But it was not so for me at all, because I was a very shy girl. After a few meetings, we two became good friends. After that, we started meeting often and eventually going out together.”

However, Arjun proposed Neha after a few meetings, after which Neha took a long time to say “yes”. The love story of these two lasted for about 8 years, after which they finally got married in the year 2013 in the presence of all friends and family members.

Arjun and Neha got married in a traditional way at the ISKCON temple in Juhu, Mumbai. They were married according to purely Hindu rituals. The two gave their wedding reception the very next day at the Hilton Hotel, Mumbai. In which all the friends of these two were involved.

Arjun also has a child, whom Neha gave birth to in the year 2015. Both have named their son Ayaan and now they are enjoying their life as good parents. Talking about Arjun’s Workfront, these days he has gone to Cape Town for the shooting of Colors TV’s popular show Khatron Ke Khiladi.

He likes to shopping, he likes to shop till he gets tired. Apart from shopping, Arjun is very fond of the gym, reading books, watching TV news, and biking. We have given a list of all his favorite things in the table, which you must read once.

Talking about the total net worth of Arjun Bijlani, his total earnings are around ₹10 crores to ₹15 crores. His main source of earning is acting in TV shows and serials. Apart from acting, he still earns good money by promoting the products of different types of brands. He charges around ₹85k to ₹1.2 lakh per episode.

In 2021, Arjun Bijlani took part in the Colors Tv much-awaited show Fear Factor: Khatron Ke Khiladi Season 11. In this show, he has been charging ₹7 lac per episode as a fee. Earlier, the shooting of the show has been completed in Capetown and telecasted soon on Colors Tv and Voot Select app.

Arjun Bijlani’s account is present on all social media platforms where he keeps sharing his upcoming projects and latest photos and videos with his fans and followers. He keeps updating his fans every day through his social media.

Apart from this, Wikipedia has also covered them on his page, whose link we have shared. In the table given below, we have shared all their social media links with you, by clicking on which you will be able to access their profile page directly.

Arjun Bijlani has ruled the hearts of the audience with his brilliant acting in many TV serials. He has made many shows hit on the strength of his acting, he is also called the TRP King of the TV industry.

Due to his excellent acting performance, he has also been honored with many awards. In the year 2020, Arjun was awarded the Dadasaheb Phalke Icon Awards Films for Best TV Icon in the Male category.

In the same year, he has also given the Gold Glam and Style Awards in the Man of Substance category. In the table below, we have given a list of all his awards, which you must see once.

Some Interesting Fact About Arjun Bijlani:

This is the full details on Arjun Bijlani Age, Family, Wife, Son, Biography, Net Worth & More. Share this post with your friends and keep visiting us on celebwale.com for famous personalities and trending people’s biography with updated details. If you have any thoughts, experiences, or suggestions regarding this post or our website. you can feel free to share your thought with us.