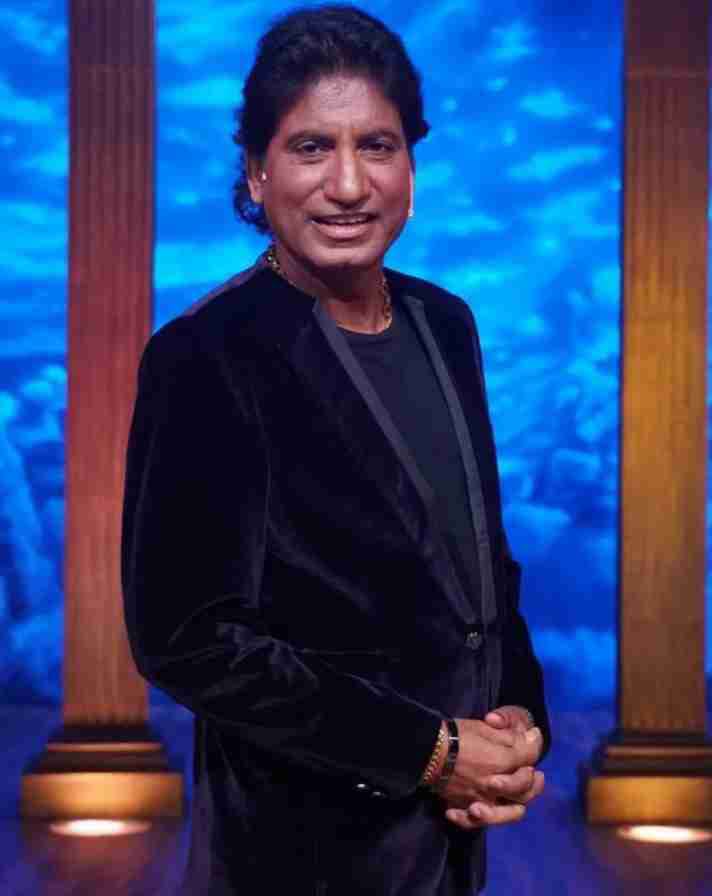 Raju Srivastava is a prolific comedian, actor, and politician known for his performance in Star One’s standup comedy show The Great Indian Laughter Challenge. Raju was fond of doing mimicry since childhood, which is why he wanted to become a comedian from the very beginning. He was born on 25 December 1963 in Kanpur, Uttar Pradesh. Raju’s real name is Satya Prakash Srivastava but affectionately everyone calls him Raju Bhaiya and Gajodhar Bhaiya. After completing his early studies in Kanpur, he moved to Mumbai with the desire of becoming a comedian.

He started his career with a small role in the Bollywood movie Tezaab released in 1988. Apart from this, he also did small roles in many Bollywood movies like Maine Pyaar Kiya, Abhay, Baazigar, Aamdani Atthani Kharcha Rupaiyaa, Big Brother, and Bombay to Goa. Raju participated in Star One’s show The Great Indian Laughter Challenge as a contestant in 2005 where his comedy got a new identity. He gained a lot of popularity with the audience with his Gajodhar Bhaiya comedy. He was the first runner-up of the show.

After gaining popularity from this show, he worked in TV shows like Bigg Boss, Comedy Circus, Raju Hazir Ho, Comedy Ka Maha Muqabala, and Laugh India Laugh. In 2009, he participated in Colors TV’s dance reality show Nach Baliye as a dance couple with his wife Sikha. He has worked with comedian Kapil Sharma on Sony TV’s popular comedy shows Comedy Nights with Kapil and The Kapil Sharma Show.

Renowned comedian Raju Srivastava is also active in politics. Presently he is involved in Bharatiya Janata Party. In 2014, he was elected by the Samajwadi Party in the 2014 Lok Sabha election from his hometown Kanpur. But later Raju returned the ticket saying that he did not have the support of the local units of the party.

After that on 19 March 2014, he joined the Bharatiya Janata Party where Prime Minister Narendra Modi made him a part of Swachh Bharat Abhiyan. Since then, he has been promoting cleanliness through his events in different cities. He has also made many music videos to promote cleanliness and apart from this he also gives the message of cleanliness to the people through TV commercials.

Comedian Raju Srivastava passed away today on 21 September 2022 at 10:20 am. Let us tell you that in 2014 he joined BJP and in the course of work he had come to Delhi to meet some party leaders, then after meeting all those people. On 10 August 2022, he went to the gym as usual in the morning, and during that time he suffered a heart attack in the morning. After which he was admitted to AIIMS in Delhi. When doctors did a CT scan of his head, the swelling was found in a part of the brain.

Raju Srivastava, who has been fighting a battle with death on a ventilator for the last 41 days, has given up his life today 21 September 2022. Since the news of his death came to the fore, there was a wave of mourning in the whole country. Everyone is paying tribute to Raju with moist eyes.

Raju Srivastava brightened our lives with laughter, humour and positivity. He leaves us too soon but he will continue to live in the hearts of countless people thanks to his rich work over the years. His demise is saddening. Condolences to his family and admirers. Om Shanti. pic.twitter.com/U9UjGcfeBK

Wat I was dreading for the past one month has happened.Raju Srivastava has left all of us for his heavenly abode.Devastated to hear the news.May God grant him eternal peace.#OmShanti

Raju Srivastava’s age at the time of death in 2022 was 58 years old and his height is 5 feet 7 inches, which is 170 centimeters. His body weight is about 70 kg, he takes a proper diet to keep his body fit so that his body measurement is 34-28-14. His eye color is Dark Brown, and his hair color is also black.

Raju was born in a middle-class Hindu family in Kanpur. His family believes in Hinduism and worships Hindu deities. Raju Srivastava’s father’s name is Ramesh Chandra Srivastava and his mother’s name is Saraswati Srivastava.

He also has a younger brother named Deepu Srivastava. His marital status is married. Raju was married on 1 July 1993 to his wife Shikha Srivastava in a Hindu ceremony in Lucknow. Raju and Shikha have a son Ayushmann Srivastava and a daughter Antara Srivastava.

The total net worth of Raju Srivastava is more than 20 crores. He has done all kinds of comedy shows in his career for which he charges a hefty amount. His main source of income is comedy. Apart from stage shows, and TV shows, he has also worked in films. He earns lakhs of rupees from his comedy shows, TV shows, and films.

Some Interesting Facts About Raju Srivastav:

This is the latest information on Raju Srivastav Biography, Death, Age, Height, Wife, Family, Net Worth & More. Please share this post with your friends and keep visiting us on celebwale.com for famous personalities and trending people’s biography with updated details. If you have any thoughts, experiences, or suggestions regarding this post or our website. you can feel free to share your thought with us.