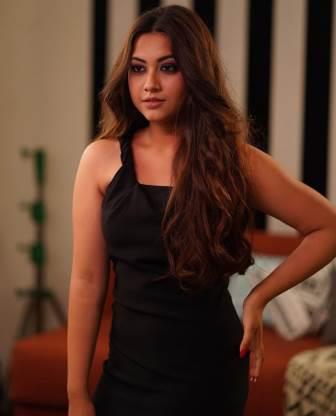 Reem Shaikh is an Indian actress known for working in the Indian television industry and Bollywood films. Reem who made her acting debut at the age of just 10 is known for her role as Rimjhim in the Colors TV serial Na Bole Tum Na Maine Kuch Kaha. One of the famous actresses of the TV industry, Reem Shaikh’s full name is Reem Sameer Shaikh. She was born on 8 September 2002 in Mumbai Maharashtra.

Before her birth, Reem’s family lived in Oman, later his father shifted to Mumbai in connection with the business. Reem’s early education was completed at Gyan Kendra School in Lokhandwala, Mumbai. Acting addict from childhood she started acting at the age of just 6, without wasting any time at all. At the age of 6, she got her first photoshoot done for which she got ₹300. Reem Shaikh was very fond of acting and dancing since childhood. For which he started taking dance and acting classes from a very young age.

She started her acting career with Imagine TV serial Neer Bhare Tere Naina Devi (2010). In which she played the main character of Lakshmi Devi as a child artist. She got recognition on the small screen with this serial. In 2012, she appeared in Star Plus’ popular serial Yeh Rishta Kya Kehlata Hai as Chikki, in which her work was highly appreciated. After this, she appeared in big serials like Diya Aur Baati Hum (2015), Khelti Hai Zindagi Aankh Micholi (2013), and Tujhse Hain Raabta (2018).

Although she has been active in the television industry since 2010, she got recognition from the role of Rimjhim in the serial Na Bole Tum Na Maine Kuch Kaha 2 telecasted on Colors TV in the year 2013. Apart from this, she is known for playing Kaurwaki in Colors TV serial Chakravartin Ashoka Samrat (2015) and Kalyani Malhar Rane in Zee TV serial Tujhse Hai Raabta (2018). Growing up working in television serials, Reem has done more than 100 TV commercial ads like Clinic Plus, Maggi, McDonald’s.

Apart from working in TV serials, she also tried her luck in some films and in 2016 appeared as a child artist in Amitabh Bachchan’s film Wazir. In the year 2020, she played the role of Malala Yousafzai in the Nobel Prize winner Malala Yousafzai’s biographical film Gul Makai.

Although the film could not do much at the box office, the role played by her was highly appreciated by the critics. She also made a cameo in the 2021 film Tuesday and Fridays. Apart from this, she has also worked on many music albums after debuting with Sunda Ni music video. In 2022, Reem will be seen in the lead role of Pakhi in Colors TV serial Fanaa Ishq Mein Marjawaan.

Reem shaikh’s age is 19 years in the year 2022. Reem is one of the emerging best actresses in the TV industry. Along with acting, the audience also likes her slim trim figure. To maintain her fitness, she is very alert about diet, exercise and takes a proper and balanced diet to stay fit so that the body can get all the necessary vitamins and minerals.

Reem’s diet is the secret of his fitness. Protein is high in their diet, protein gives them the energy to work throughout the day. Her diet is gluten-free and does not eat wheat bread but does include soup and salad in the food. Apart from this, she drinks a lot of water, which keeps her away from diseases and also maintains a glow on her face.

By drinking more water, they feel less hungry and avoid overeating. Reem does not get time to exercise due to serial shooting but whenever she gets time she definitely goes to the gym. Apart from going to the gym occasionally, Reem always does yoga and jogging.

Reem Shaikh was born in an upper-middle-class Muslim family. His entire family follows the Muslim religion and also offers prayers for Allah. Reem Shaikh’s father’s name is Sameer Shaikh and he runs a printing press in Mumbai while her mother Sheetal Shaikh is a housewife. Apart from her parents in her house, she also has a sister named Riya Sharma. Talking about her marital status, she is still unmarried, so her husband’s name is not known.

If internet media is to be believed, then Reem Shaikh’s affair is going on with actor Sehban Azim. The two met while working in the Zee TV serial Tujhse Hai Raabta in which the audience is loving their on-screen chemistry as well as off-screen chemistry. Apart from this, both often share each other’s posts on social media.

Seeing them spending time with each other every moment, such discussion started that Reem Shaikh and Shehban Azim are dating each other. Although Shehban is almost twice as old as Reem, where Shehban’s age is 35 years, the same Reem’s age is 19 years. Later, she had denied all these things in an interview, putting an end to the discussions of dating with Shehban.

Reem Shaikh’s account is present on all social media platforms where she keeps sharing her hot photos with fans. Reem’s account is present on Instagram where she is followed by more than 4.3 million people and her number of posts is almost more than 1.1k. She keeps sharing pictures of her bold look on her Instagram, due to which discussions of her beauty are everywhere. She creates panic with her uploaded pictures on social media.

Her bold style is praised everywhere on social media. On Instagram, she uploads pictures of such poses that fans just keep looking at her pictures and shower’s praises in the comment section. She is also present on Facebook where she is followed by more than 1 million people. Reem is also covered by Wikipedia on its page.

Apart from this, she is also present on Twitter where she keeps sharing her thoughts through tweets with her more than 23k followers. In the table below, we have shared the links of all his social media profiles with you, by clicking on which you will be able to access his profile page directly.

Talking about the total net worth of Reem Shaikh, her net worth ranges from around ₹2 crores to ₹5 crores. Reem’s main source of earning is acting in films and television serials. She charges around ₹10 lakh to ₹15 lakh for her role in a film. Apart from this, she charges around ₹30k to ₹50k per episode for working in serials. Reem also posts sponsors of brands like Riyo Herbs, Wella India, Hirect, Spotify, and mcaffeine on her social media account for which she charges a lot of money.

Some Interesting Fact About Reem Shaikh:

This is the latest information on Reem Shaikh Biography, Wiki, Age, Family, Husband, Net Worth & More. Share this post with your friends and keep visiting us on celebwale.com for famous personalities and trending people’s biography with updated details. If you have any thoughts, experiences, or suggestions regarding this post or our website. you can feel free to share your thought with us.