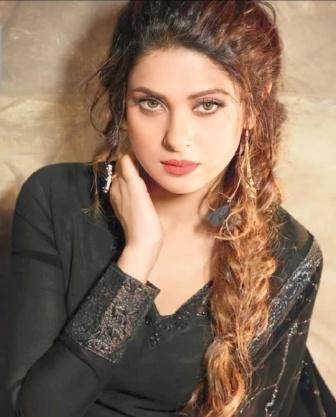 Jennifer Winget is one of the most beautiful and sexiest actresses in the television industry and is known for her role as Kumud Desai in the television serial Saraswatichandra. Winget was born on 30 May 1985 in Goregaon, Mumbai, Maharashtra.

Her early schooling took place at St. Xavier’s High School in Mumbai, after which she did her graduation with a B.Com from KJ Somaiya Junior College of Science and Commerce, Mumbai. She joined films as a child actress at the age of just 10 where she played the character of a child artiste in the Bollywood film Kuch Na Kaho.

Apart from this, she has worked as a child artist in many Bollywood films like Akele Hum Akele Tum, Raja Ki Aayegi Baaraat, and Raja Ko Rani Se Pyaar Ho Gaya. She made her debut in the television industry in the year 2002 by playing the role of Piya in the telecasted TV serial Shakalaka Boom Boom.

In the year 2013, Jennifer was offered the role of Kumud Desai in Sanjay Leela Bhansali’s Serial Saraswatichandra, which earned her a lot of fame. This role of her was very much liked by the TV audience and with her acting, she left her own mark in the hearts of the TV audience. After this, Maya Mehrotra and Maya Jaisingh were well-liked for their roles in the Sony TV serials Beyhadh and Beyhadh 2.

Jennifer Winget’s age is 37 years old in the year 2023, she is a very beautiful actress in the Indian TV world who is known for her looks and appearance. Her body look is very spectacular and she looks very attractive in appearance. It was because of her looks that Jennifer was named by the UK-based newspaper Eastern Eye in their list of 50 Sexiest Asian Women in 2012.

She is very conscious about her physical appearance and keeps doing various exercises in the gym to maintain her body. Apart from this, she also takes special care of her food and does not like to take too oily things in food. She consumes fruit juices daily and takes nutritious food to keep her body healthy.

Jennifer was born into a prosperous Christian family. Her entire family believes in the Christian religion and also prays in the church for Jesus Christ. She is the daughter of a Punjabi mother and a Maharashtrian Christian father. She often appears to be of non-Indian origin due to her Western name.

She got divorced from her ex-husband Karan Singh Grover due to personal reasons. Jennifer Winget met Karan Singh Grover for the first time in the year 2005 on the sets of the serial Kasautii Zindagii Kay. After this, both worked together in the serial Dill Mill Gaye. After this, both of them started dating each other and got married on 9 April 2012.

Later in the year 2014 after 2 years of their marriage, Jennifer and Karan decided to separate from each other. After separating from Jennifer, Karan married Bollywood actress Bipasha Basu for the second time and Jennifer is still single.

The total net worth of Jennifer Winget is around ₹42 crores. She is a well-known artist in the TV industry, who has worked in many hit serials. According to reports, earlier she used to charge around ₹80k to ₹85k per episode in serials and shows, but after giving hit serials one after the other, she is counted among the highest-paid actresses in the TV industry.

Jennifer’s verified account is present on Twitter where her number of followers is around 2 million. Apart from this, Wikipedia has also covered Jennifer on its page. In the table below, we have shared with you the links of all their social media profiles, by clicking on which you will be able to access their profile page directly.

Some Interesting Facts About Jennifer Winget:

This is the full details on Jennifer Winget Biography, Age, Height, Family, Husband, Child, Son, Net Worth & More. Share this post with your friends and keep visiting us on celebwale.com for famous personalities and trending people’s biography with updated details. If you have any thoughts, experiences, or suggestions regarding this post or our website. you can feel free to share your thought with us.