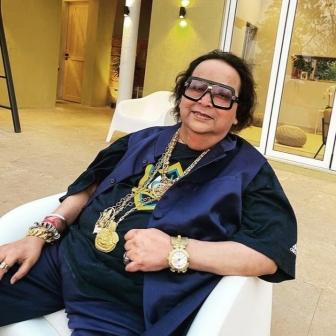 Bappi Lahiri was a well-known music composer in the Indian music industry who was famous worldwide for his pop vocals. World-famous Bappi Lahiri was born on 27 November 1952 in Jalpaiguri, West Bengal and his real name were Alokesh Lahiri. From childhood, he started dreaming of becoming world-famous. At the age of three, he started taking music lessons, learning tabla, piano, saxophone, and dholak.

Apart from this, he also completed his early education in his hometown. Bappi Da did not pursue his graduation due to a lack of interest in studies due to music. He learned music from his parents and at the age of 19, he was selected to sing for the first time in the Bengali film “Daadu”.

Bappi Lahiri moved to Mumbai at the age of 19 to earn a name in Bollywood. In the year 1973, he got a chance to sing a song in the Hindi film “Nanha Shikari”. However, he got his real identity in Bollywood with the 1975 film “Zakhmi”. In this film, he sang with great singers like Mohammad Rafi and Kishore Kumar. After this, the song of Bappi Da started spreading on everyone’s tongues.

After this came the pair of Bappi Lahiri and Mithun Chakraborty. The pair of these two made such a splash in Bollywood that everyone became crazy about dance and disco music. Together they made films like Disco Dancer, Dance Dance, and Kasam Paida Karne Wale a hit with their songs. He sang more than 4000 songs in major languages ​​like Hindi, Tamil, Telugu, Odia, and Kannada.

Some of his songs in Telugu are

He also composed songs in Tamil. Here is the list:

They also gave his voice to some Kannada songs. They are:

Bappi Lahiri is ruling the hearts of people with his pop music today, he has given more than one superhit song. He is the only musician in the Indian music world who was invited by Michael Jackson to his first show. This live show took place in Mumbai in 1996. He is credited with bringing a mix of pop to Hindi music. Because of this, he also got a lot of opposition.

After getting success in singing, he also tried his hand at politics. In the year 2014, he joined the Bharatiya Janata Party in the presence of BJP leader Rajnath Singh and contested on a BJP ticket from the Srerampur Lok Sabha constituency of West Bengal. But he lost to All India Trinamool Party candidate Kalyan Banerjee.

Bollywood veteran singer Bappi Lahiri has said goodbye to this world today. On Wednesday, he breathed his last in CrtiCare Hospital in Mumbai at the age of 69. After his death, there has been a wave of grief in the whole country and his fans are remembering him through posts on social media. Along with this, President Ram Nath Kovind and Prime Minister Narendra Modi have also expressed grief by tweeting.

Bappi Lahiri had been ill for some time. It is being told that due to OSA, a lot of carbon dioxide used to accumulate in his lungs. This was the reason that he was going to and from the hospital for the last one year.

Bappi Lahiri’s age was 69 in the year 2022. Died today on 16th February 2022 at CritiCare Hospital, Mumbai and today we have lost another star of the music world. Just a few days ago, Lata Mangeshkar Ji, the emperor of the music world and the mistress of music passed away. Talking about Bappi Da’s fitness, he was very fond of eating and drinking.

Bappi Lahiri’s height is 5 feet 6 inches, which is 168 centimeters. His body weight is about 107 kg, he takes a proper diet to keep his body fit so that his body measurement is 42-32-15. His eye color is black color, and his hair color is also black.

Bappi Lahiri was born in a prosperous Hindu Bengali family. He was the only child of his parents and he had no brother or sister. His entire family believes in Hinduism and worships Hindu deities. He belongs to a wealthy musical family. Bappi Lahiri’s father Aparesh Lahiri was a famous Bengali singer and his mother Bansuri Lahiri was also a Bengali musician.

Bappi Da’s cast was that of Barendra Brahmin in Sandilya gotra. Famous music composers Kishore Kumar and S. Mukherjee was his maternal uncle. Talking about his marital status, he was married. On 24 January 1977, he married Chitrani Lahiri according to Bengali customs. Bappi Lahiri’s wife’s name is Chitrani Lahiri. They also have a son named Bappa Lahiri and who is a music director.

Apart from this, he also has a daughter named Rema Lahiri, who is a singer by profession. Bappi Lahiri’s son Bappa Lahiri is married to Tanisha Lahiri with whom they have a son, Kris Lahiri. Bappi Da’s grandson’s name was Krish Lahiri.

Talking about the total net worth of Bappi Lahiri, then his net worth is around ₹21 crores. He was a great singer and music composer in the music world. Another of his specialties was his jewelry. Thick gold chains and heavy rings around the neck used to call Bappi Lahiri even a gold shop. But the truth is that he was very fond of gold and he considers gold lucky for himself.

He also had 4 bodyguards to protect the gold he wore. He used to wear about 4 and a half kilos of gold all over his body. Talking about the property of Bappi Lahiri, who said goodbye to the world, according to the news, he had assets worth ₹21 crores, including BMW and Audi cars.

Apart from this, Bappi Lahiri also has Tesla’s X car. On the other hand, if we talk about the sauna near Bappi Lahar, then he has more than four and a half kilos of gold. According to the news, he has installed a gold-plated disc in his house in memory of the hit songs.

Talking about Bappi Da’s social media account, his account is present on all platforms. It is not possible to talk about Bappi Da and not look at his style. Bappi Lahiri, who wears expensive gold jewelry, is always seen with the look of a rockstar. Even in a conversational style, he seems to mix that has a lot of foreign fashion with an Indian look.

His outfit mostly consists of tracksuits or kurta pajamas. Along with this, he never used to leave his sunglasses in summer or winter. Bappi Da’s social media account also has all the photos of his looks. In the table below, we have shared with you the links of all their social media platforms, by clicking on which you will be able to access their profile page directly.

Talking about Bappi Da’s awards and achievements, according to a report, in the year 1986, he sang 180 songs in 33 films. His record is also recorded in the Guinness Book of World Records. He has also been awarded the Lifetime Achievement Award by the Filmmaker.

Some Interesting Facts About Bappi Lahiri:

This is the full details on Bappi Lahiri Biography, Wiki, Age, Family, Wife, Death, Songs & More. Please share this post with your friends and keep visiting us on celebwale.com for famous personalities and trending people’s biography with updated details. If you have any thoughts, experiences, or suggestions regarding this post or our website. you can feel free to share your thought with us.