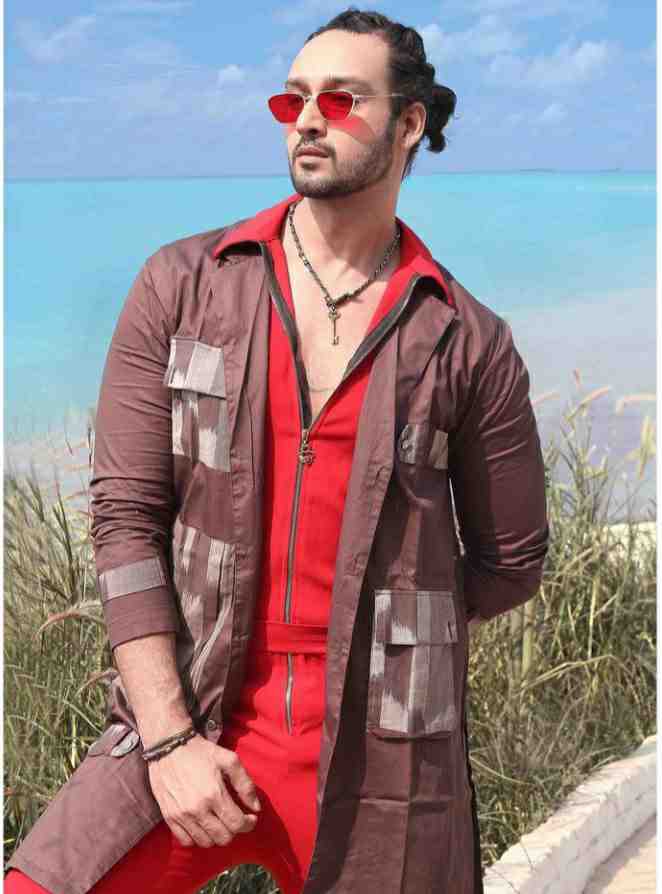 Saurabh Raj Jain is a famous Indian actor and a former model known for his acting primarily in the field of Hindi television. He was born on 1 December 1985 in New Delhi, India, and his full name is Sourabh Raaj Jain. He received his early education from CSKM Public School, New Delhi. Belonging to a middle-class family, he was self-Independent since school days and taught tuition to children younger than him where he used to charge a fee of ₹500.

After intermediate, he received his Bachelor’s degree in computer application from Guru Gobind Singh Indraprastha University, Delhi. When he was in his second year of college, he got an opportunity to act in the TV show Remix, from this TV show he started his acting career. Later, when he finished shooting for the show, he took a 2-year break from acting so that he could continue his further studies.

Then, Saurabh continued his studies and completed his MBA from Symbiosis International University, Pune. After finishing his MBA, he again moved to Mumbai to take his place in the acting industry where he struggled a lot due to his long height. He was rejected every time due to his height in the audition because it was very difficult for the makers to find their opposite pair.

But after a few struggles, in 2008, he got a chance to play the role of Sukhi in a TV serial Meet Mila De Rabba. He made his Hollywood film career debut in 2008, by playing the role of Linda’s boyfriend in the Hollywood film Karma. In 2008, he appeared in another TV serial Kasamh Se in which Saurabh played the character of Rohit Chopra.

The year 2008 was proving to be quite good for Saurabh, with one of his television serials being telecasted on TV. In the same year he played the role of Lord Vishnu in a TV serial Jai Sri Krishna. After this, in the year 2009, he played the role of Vikram in Yahaaan Main Ghar Ghar Kheli. Saurabh’s TV serials were doing very well in the TRP list, but he was not still getting the recognition for which he is known.

He became popular among people in this role. The serial produced by Swastik Productions proved to be a game-changer for his career. Even the producers of this serial were so eager to cast him in the role of Lord Krishna that they stopped Saurabh for 1 year by paying a lump sum every month so that he could not do any other project. After his show was a tremendous success, he worked on several projects.

In 2021, he is also going to be seen as a contestant in season 11 of Colors Tv most popular tv show Fear Factor Khatron Ke Khiladi, which will be telecasted by a famous Bollywood director Rohit Shetty. Saurabh Raj Jain has also worked as a narrator in the mythological show Radha Krishna and Devi Adi Parashakti.

He is currently counted as the most popular actor in the field of television. After working in mythology, his popularity has increased considerably and he has become popular from house to house. Millions of people have become crazy about his acting.

Saurabh Raj Jain’s age is 36 years old in 2022. He looks quite handsome in his looks, the simplicity and cuteness are clearly visible on his face. He exercises daily in the gym to keep his body fit and also resorts to yoga.

Along with this, he also takes care of his food and drink and avoids eating oily things. They eat fruits regularly so that their body can stay healthy, besides they also eat nutritious food.

Saurabh Raj Jain’s height is 6 feet 3 inches, which is equal to 192 centimeters. His body weight is about 90 kg, he takes a proper diet to keep his body fit so that his body measurement is 44-34-18. His eye color is black, and his hair color is black.

Apart from the parents, there are two elder sisters in Saurabh’s house, whose name has not been known. Talking about the marital status of Saurabh, he is married and his wife’s name is Ridhima Saurabh Jain. He first met his wife at the Ashley Lobo Academy in Noida, where the two dated each other for nearly 3 years.

After this, both of them married each other in the year 2010. In the year 2017, Ridhima also had two twins from Sourav, a boy, and a girl. Saurav and Ridhima named their son Hrishivh and named their daughter Hrishika.

In the dance reality show Nach Baliye season 9, which aired in the year 2019, was attended by Sourav and Ridhima as contestants. Right now both of them are very happy and satisfied in their married life.

He is also very fond of films and songs. Talking of his favorite films, Mughal-e-Azam Lamhe and 3 Idiots is the best film and SS Rajamouli Anurag Basu is his favorite Bollywood director.

In the table below, we have given a complete list of Saurabh’s favorite things, which you must read once.

Saurabh Raj Jain has a total net worth of ₹35 to ₹40 crores and his income source is from acting in TV serials, ads & modeling. Now he has owned a brand new Ford Eco Sport car. He also takes a charge of ₹3lac to ₹5 lac per episode in the Tv serial.

In 2021, Saurabh Raj Jain took part in the Colors Tv much-awaited show Fear Factor: Khatron Ke Khiladi Season 11. In this show, he has been charging ₹2 lac per episode as a fee. Earlier, the shooting of the show has been completed in Capetown and telecasted soon on Colors Tv and Voot Select app.

In the year 2021, he has just started his new YouTube channel in the name of Saurabh Raj Jain, on which he keeps sharing his videos with all his subscribers.

Their number of subscribers on YouTube is more than 3K. Apart from this, Saurabh has been given a place on his page by Wikipedia and has also covered him.

Below we have shared the link of all their social media profiles with you in the table, by clicking on which you will be able to directly access their profile page.

Saurabh has so far impressed us all with his strong role in many television serials. He has been known to play the role of Lord Krishna and Lord Vishnu in mythology.

Apart from this, he is going to be seen in Colors TV’s famous show Fear Factor Khatron Ke Khiladi in 2021 this year. Bollywood director Rohit Shetty is going to host the show.

Below in the table we giving you all the list of his tv serials and shows where he has been worked.

Saurabh Raj Jain has not only won the hearts of all of us with his acting in TV serials, but he started his career with a Hollywood film called Karma, in which he played the role of Linda’s lover.

He also worked in an Indonesian film called Check-In Bangkok in the year 2015, in which he played the role of Krish.

In the table below, we have given a list of all the movies, which you must read once.

Saurabh played Hassan Farouqi in Qubool Hai 2.0, a web series in his career.

This is the full details on Saurabh Raj Jain Age, Height, Biography, Wife, Kids, Family, Net Worth & More. Share this post with your friends and keep visiting us on celebwale.com for famous personalities and trending people’s biography with updated details. If you have any thoughts, experiences, or suggestions regarding this post or our website. you can feel free to share your thought with us.