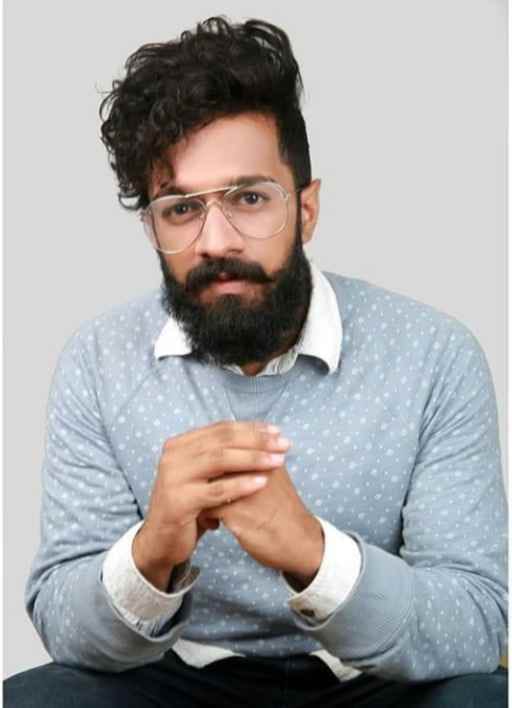 Sai Vishnu R. was born in a middle-class family in Alappuzha, Kerala, India. He finished his schooling at one of the schools of Alapuzha. It is considered that Sai is a man of dreams. In his School, he was very active in sports and extracurricular activities.

Whenever he was asked by  teachers what he wanted to be, he said “I want to be an actor.” Since childhood, he wanted his career in acting. Nothing less than that. He always had clarity about his aim. Vishnu never compromised his dream for anything. He started his career as a model.

Initially, he endorsed various brands. Sai has appeared in many print advertisements as well. He was featured in a Christian devotional music album Prakasam, few short films like A window which was released in 2019, and Manorama Aarogyam Magazine.

Vishnu has also played a role in a comedy web series Paapi Paaru. He has also worked as an anchor in several shows like Surya Music Greetings Live and been a part of many theatre plays. In 2019, he appeared in a commercial ad for Nerolac paints. He has written many short stories and still writes in Malayalam.

In 2021, Sai Vishnu took part in Asianet’s most talked-about television show Bigg Boss Malayalam Season 3 as a contestant. Apart from him, many artists like Adoney John, Noby Marcose, Divya Uruduga, Rithu Manthra, Manikuttan have participated in this show. The show is hosted by Malayalam film superstar Mohanlal.

He has done a lot of jobs in his life before appearing in TV shows. When another contestant in Bigg Boss Malayalam, Firoz, tried to advise him about the importance of having jobs, then Vishnu replied and said

“You can first check with me about whether I have a job before you say something like this at a public platform. You don’t know what I am doing, do you? You don’t really need to advise me on getting a job, because I have done everything from being a newspaper delivery boy to working at a hotel kitchen to an IT firm and as a salesman. I am the breadwinner in my house and the one who pays for my sister’s education. So, it isn’t fair to make me a topic of your story without checking with me.”

Sai Vishnu’s age is not known and he is an actor model and also a writer in the Malayalam TV industry. His physical appearance is quite good and he exercises for hours in the gym every day to maintain his body. He takes nappy food and eats green vegetables and fruits so that they can stay healthy.

Vishnu was born into a middle-class Hindu family. He believes in Hinduism and also worships Hindu deities. He is a devotee of Mahadev. Sai Vishnu’s father’s name is not known but he is a shopkeeper who runs a shop and we do not know his mother’s name but she is a homemaker.

Apart from his parents, he has also a sister whose name is not known. If we talked about his marital status. He is still unmarried and he has no children.

Talking about the net worth of Sai Vishnu, according to sources, he takes charge around ₹60k to ₹70k for an episode of the Bigg Boss Malayalam Season 3 show. The main sources of his earnings are television shows, movies & Web series and Secondary income comes from ads, serials, and Others.

Sai Vishnu’s account is present on all social media handles except Facebook & Twitter where he keeps updating his regular photos, which keeps him in the headlines. Sai Vishnu has an account on Instagram where he has more than 31k followers. He keeps sharing about 3 to 5 photos on Instagram every week with his fans.

Sai Vishnu is not covered by Wikipedia. Below we are sharing the links of all their social media accounts with you, by clicking on which you will be able to access their profile directly.

Some Interesting Fact About Sai Vishnu:

This is the full details on Sai Vishnu R Biography, Wiki, Age, Birthday, Height, Birthday, Father, Family, Bigg Boss Malayalam 3, Instagram & More. Share this post with your friends and keep visiting us on celebwale.com for famous personalities and trending people’s biography with updated details. If you have any thoughts, experiences, or suggestions regarding this post or our website. you can feel free to share your thought with us.