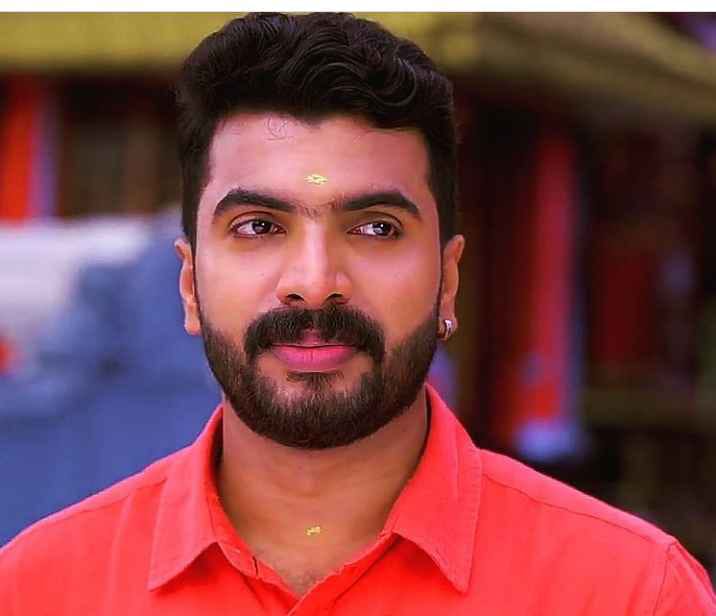 Anoop Krishnan an Indian television actor, director, and anchor famous in the Malayam industry was born on 7 May 1990 (Sunday) in Pattambi, Palakkad, Kerala, India. He did his primary education at AUP School, Muthuthala. High School education was finished at P.H.S., Pallipuram, Kerala by him.

Krishnan completed his higher secondary education from VHSE, Koppam, Kerala. In order to pursue higher education, he took admission in SNGS & co-operative college, Pattambi in B.A. literature and graduated from there.

After completing his graduation, He got the role in the movie Face in Facebook directed by Jibin George James in 2010 but owing to some technical reasons, the movie could not be completed. Thereafter, he chose his career in anchoring.

Anoop has appeared as an anchor in many stage shows such as Malabar Mahotsavam, DTPC Onam fest, and National closing games ceremony, etc. While working as an anchor on several shows, he received calls for two movies. Mammooty- Daivathinte Swantham Cleetus(2013) and Praise the Lord(2014).

After doing this movie, he did not achieve much recognition in public. However, Gradually, he started getting roles in different movies. Sunny Vishwanath, Krishnan’s mentor, and music director introduced him to Padma Shri Balachandra Menon to do a stage show in Dubai.

This show paved the way for Anoop to get a role in a Balachandra movie Njan Samvidhanam Cheyyum which was released in 2015.  While doing this movie, he was selected for another Sanskrit movie “Ishti” directed by G.Prabha released in 2016. For this movie, Anoop reduced his weight by 11 kg and also learned to make kathakali ornaments and handicrafts.

This movie gave him the chance to walk at the Red Carpet of Indian Panorama of IFFI held in Goa in 2016. During his life’s journey, he also created some short music videos, documentaries, and films. One of his documentaries, Raise of hope was done solely to create awareness about the kidney-related disease.

Meanwhile, he also did minor roles in cinemas. His lead character Kalyan in a television serial Seetha Kalyanam released in 2018 was widely lauded. This serial was telecast on Asia Net and Hotstar. In the same year, he was nominated for best actor and popular actor category.

Eventually, at the end of 2019, after releasing De-Javu a suspense thriller short film on Christmas, he received huge appreciation and attention.

In 2021, Anoop Krishnan took part in Asianet’s most talked-about television show Bigg Boss Malayalam Season 3 as a contestant. Apart from him, many artists like Adoney John, Noby Marcose, Divya Uruduga, Rithu Manthra, Manikuttan have also participated in this show. The show is hosted by Malayalam film superstar Mohanlal.

Anoop Krishnan’s age is 29 years as of 2021  His physical appearance is quite good and he does exercise for hours in the gym every day to maintain his body. He takes nappy food and green vegetables and fruits to keep himself fit and healthy.

Talking about the net worth of Anoop Krishnan, according to sources, he takes charge around ₹45k to ₹60k for an episode of Bigg Boss Malayalam season 3 show. The main sources of his earnings are television shows.

Anoop Krishnan’s account is present on all social media handles where he keeps updating his regular photos which keeps him in the headlines. He has an account on Instagram and Facebook where he has more than 25k and 5k followers.

He keeps sharing about 3 to 5 photos on Instagram every week with his fans and keeps updating his Facebook page regularly. He is not available on Twitter.

Anoop Krishnan is also covered by Wikipedia. Below we are sharing the links of all his social media accounts with you, by clicking on which you will be able to access his profile directly.

Speaking of Anoop Krishnan’s favorite things, he is an actor and as well as a director also. He likes Bike riding in his spare time. He loves to watch cricket and his favorite Sport is also cricket. Below we have given a list of all his favorite things in the table that you must read once.

Anoop Krishnan made his TV debut with the Malayalam film Daivathinte Swantham Cleetus in the year 2013. In this movie, he played the role of the shopkeeper. After that, he has been done more than 15 films.

He got recognition after the film Ishti who was shot in the language of Sanskrit and in this movie he played the role of Raman Namboothiri.

Ishti made him walk through the red carpet of the Indian Panorama of IFFI held at Goa held in 2016. In the year 2018, he made his debut with the Malayalam tv show Seetha Kalyanam. Recently, he is a contestant of Bigg Boss Malayalam season 3 in 2021.

Some Interesting Fact About Anoop Krishnan:

This is the full details on Anoop Krishnan Biography, Wiki, Age, Height, Birthday, Father, Family, Wife, Engagement, Fiance, Bigg Boss Malayalam 3, Instagram & More. Share this post with your friends and keep visiting us on celebwale.com for famous personalities and trending people’s biography with updated details. If you have any thoughts, experiences, or suggestions regarding this post or our website. you can feel free to share your thought with us.