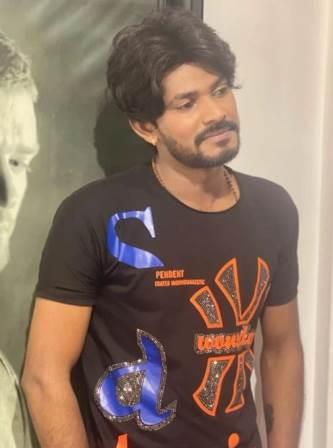 Sawai Bhatt was born in a small village Gachhipura, in the district Nagaur of Rajasthan. He runs a puppet show with his parents. It is the traditional music of Rajasthan which is their pride. In this show, Sawai sings and rolled his hand to make the puppet dance. He belongs to a very poor family, his father also used to work as a puppet and somehow managed to sustain his family and raise the family like that.

He neither has a house to live in nor food to eat, he spends his life in slums, which his father somehow used to fill his family. Sawai also grew up in this poverty and as he grew up, he moved on to traditional music he too got involved in this work and somehow managed to feed his family. Since Sawai was born in Rajasthan, he has inherited music and from that, he spends it at home.

But he says that since the era of mobile and the internet has come, his work has stopped completely and he is facing a lot of difficulty in living his life. He did not give up even during this difficult period and due to the motive of friends, he auditioned for the 12th season of Indian Idol where he mesmerized the judges by singing the song Keshariya Balam Aao Mere Desh. Sawai not only cleared the audition but also received the Golden Mic from the judges.

Sawai Bhatt’s father is also a good poppet singer, his tears broke out when he saw his son perform on such a big stage for the first time. The father runs a puppet show in Rajasthan to make a living. Traditional music is his pride. When Sawai Bhatt introduced the Rajasthani song Kesariya Balam…, the judges Himesh, Neha, and Vishal left their chairs and clapped for him. Himesh even said that after Sunny Hindustani and Salman Ali, I always wondered how Mission Impossible 3 would be, but today the answer was found.

Sawai too has always practiced music, but his family’s financial situation became a hindrance to his dreams. However, after the Motivate of his friends, he decided to go to the audition. Sawai believes that, since mobile TV has come, his puppet work is over. Sawai has not taken any formal training in music, but he wants to learn music and with his skill, he wants to create a new identity of his own. Actually, the art culture of Rajasthan is inherited, it is so rich that the children of Dhanis start performing right from the beginning.

Sawai presented the famous Rajasthan song ‘Keshariya Balam’ in front of the judge in his audition. It is said that even if you have not been to Rajasthan. But Rajasthan definitely comes to you by becoming ‘Keshariya Balam‘. The judges of Indian Idol were also mesmerized by Sawai’s performance. Praising him, he said, after Salman and Sunny, he has the ability to become the voice of his country. Pleased with Sawai’s voice, he gets a golden mike.

Sawai was born in a very poor family in Rajasthan. His family believes in Hinduism. Sawai Bhatt’s father’s name is Ramesh Bhatt and he is also a puppet singer. Her mother’s name is Sushila Bhatt. Besides his parents, he has a younger sister at home. Sawai’s marital status is currently unmarried.

Sawai Bhatt’s total net worth is around ₹ 70 lakhs. He earns a lot from his singing. He has also lent his voice to the songs of Himesh Reshammiya. Apart from this, he does shows in many places across the country.

Some Interesting Facts About Sawai Bhatt:

This is the latest information on Sawai Bhatt (Indian Idol Singer), Biography, Age, Height, Family, Wife, Net Worth & More. Share this post with your friends and keep visiting us on celebwale.com for famous personalities and trending people’s biography with updated details. If you have any thoughts, experiences, or suggestions regarding this post or our website. you can feel free to share your thought with us.