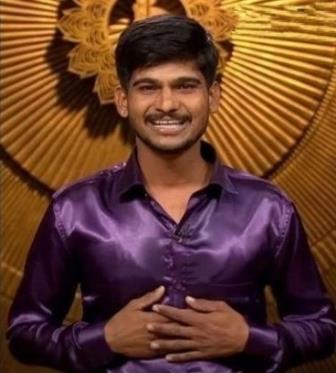 Kamlesh Nanasheb Ghumare, popularly known as Jugaadu Kamlesh across the country, is the son of a farmer and also an entrepreneur who owns the agricultural products company KG Agrotech. He was born in 1996 in Devarpade, Malegaon, Maharashtra. He completed his early studies at NS Deshmukh Vidyalaya located in Malegaon, Maharashtra, then enrolled in Maharaja Sayajirao Gaikwad College, Malegaon to study BCA.

During his college studies, he used to participate in various competitions like acting and singing where his friends inspired him to make a career in the entertainment industry seeing his acting talent. He later dropped out in his second year of college and went to Mumbai to try his luck in acting. A friend of his in Mumbai helped him stay there and get him auditioned, but he failed the audition because of his looks and language.

Then he came back home concluding his dream of acting. After coming home, he came in contact with a man from his village, he offered Kamlesh a government job by giving him ₹1 lakh and original documents, to which he agreed. But later that person betrayed him, then he decided that he would never do a job again. After seeing so many failures in his career, he became depressed and even tried to commit suicide.

“One day when I was in the fields, I saw my father spraying insecticides and he got various skin diseases due to pesticides, but he never complained about it. But I decided to do something for my father and the rest of the farmers of the country. I thought of simplifying the process. I was not an engineer but had a plan that I would go to the nearby scrap shops to get some spare parts or scraps. Initially, it was like a bicycle framework and not very efficient, but gradually I kept adding elements to it and tweaking it as needed.”

After this, he built a pesticide trolley for the farmers, so that farmers can easily spray insecticides in their fields. It took them about 7 years to make the pesticide trolley. In 2012, he uploaded a video of his trolley on social media which went viral very fast. After this, he got offers from various companies to sell his product but he rejected that offers. Kamlesh was awarded the 24-Hour Rise Startup Unicorn Award by Zee for his invention.

In the same year 2021, he saw the promo of Sony TV’s show Shark Tank India on his mobile which was based on promoting entrepreneurs of India. His brother’s son asked him to participate in the show after watching the promo. After several rounds of auditions, he appeared in front of the judges on the show in 2022 with his brother’s son Naru presenting his pitch, he said

After the presentation, when a shark asked him why he did not opt ​​for a job, he replied, “If I do a job, I will be someone’s slave for 24 hours, and we are farmers, we do not want to be anyone’s slaves”.

After which his idea and pitch were appreciated by the Sharks, the investment offer was rejected by 4 Sharks Anupam Mittal, Namita Thapar, Vinita Singh, and Ghazal Alagh. Only Lenskart founder and CEO Peyush Bansal accepted his offer and offered Rs 20 lakh as an investment along with a 40% stake in his company KG Agrotech.

Kamlesh accepted his offer. A few days after the show, Peyush Bansal called her to his home in Delhi and discussed the product. Even Peyush Bansal shared a video with Kamlesh in which he talked about launching the product in the market soon.

Jugaadu Kamlesh’s age is 27 years in the year 2023 and he is a young entrepreneur who first came into the limelight from the Sony TV show Shark Tank India. He is a farmer who works day and night in the fields due to which his body is very fit.

Jugaadu Kamlesh’s height is 5 feet 7 inches, which is 170 centimeters. His body weight is about 62 kg, he takes a proper diet to keep his body fit so that his body measurement is 36-28-10. His eye color is Black, and his hair color is also Black.

Apart from his parents, he has an elder brother named Nilesh Ghumre. His elder brother Nilesh works in the Indian Army. His marital status is still unmarried. He is a young entrepreneur of just 27 years who is focused on his career.

It would be wrong to judge anything about Jugadu Kamlesh’s net worth right now. He is a farmer and young entrepreneur whose company AG Agrotech is invested in by Piyush Bansal, founder of Lenscort, ₹ 20 lakh.

Some Interesting Facts About Jugaadu Kamlesh:

Que. Who is Jugaadu Kamlesh?

Disclaimer: All images are available on the Jugaadu Kamlesh official Instagram Account. Images can be taken from his official Instagram account for educational purposes. Image Credit goes to the respective owners of the Image Creator. We try to gather accurate data but sometimes there might be some mistakes, Kindly let us know if you find mistakes, and We would correct them. We do not take any Guarantee/Claim That the information we have gathered is 100% correct.

This is the full details on Jugaadu Kamlesh Biography, Wiki, Age, Wife, Family, Kids, Net Worth & More. Please share this post with your friends and keep visiting us on celebwale.com for famous personalities and trending people’s biography with updated details. If you have any thoughts, experiences, or suggestions regarding this post or our website. you can feel free to share your thought with us.