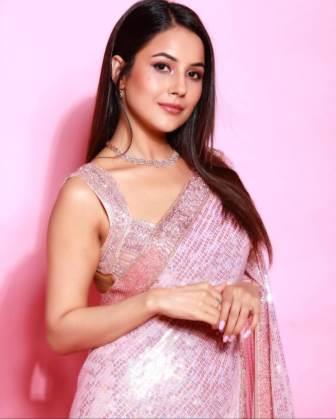 Shehnaaz Gill is an Indian model, actress, and singer known for participating in Bigg Boss 13 as a contestant. She mainly works in Indian Television Industry and Punjabi films. Gill was born on 27 January 1993 in Beas, Amritsar, Punjab. Her full name is Shehnaz Kaur Gill.

She completed her early education at Dalhousie Hilltop School, Dalhousie. After that, she earned a degree in commerce from Lovely Professional University, Phagwara. Gill was fond of singing since childhood and also dreamed of becoming an actress.

Taking a step toward her dream, she turned to the acting industry after college. She started her career with the video song Shiv Di Kitaab released in 2015.

After that in 2016, she appeared in Majhe Di Jatti and Pindaan Diyan Kudiyaan. Apart from this, Gill worked mainly in the Punjabi films Sat Shri Akaal England, Kala Shah Kala, and Daaka.

She participated in Bigg Boss 13 in September 2019 as a contestant where her pairing with late actor Siddharth Shukla became popular. She was also the first runner-up of Bigg Boss 13.

In February 2020, she participated in Colors TV’s program Mujhse Shaadi Karoge as a contestant but the show got canceled due to the COVID-19 pandemic. After that Gill worked in many music videos like Bhula Dunga, Keh Gayi Sorry, Kurta Pajama, Waada Hai, and Shona Shona.

In 2021 she appeared in the Punjabi film Honsla Rakh opposite Diljit Dosanjh. Her upcoming project is Salman Khan’s film Kabhi Eid Kabhi Diwali in which she will be seen as an actress.

Shehnaaz Gill’s age is 30 years old in 2023. She is one of the fittest actresses. She is always in discussions about her fitness and beauty. Her body is in perfect shape. But this actress works hard to maintain herself and keeps sharing fitness videos and photos on social media to inspire her fans toward fitness. She is not only a fitness freak, but she also believes in maintaining her figure and balancing a healthy lifestyle.

Shahnaz was born in an upper-middle-class Sikh family in Amritsar, Punjab. Shehnaaz Gill’s father’s name is Santokh Singh Sukh and her mother’s name is Parminder Kaur. Apart from her parents, there is also a younger brother in her house whose name is Shehbaz Badesha.

Gill’s marital status is currently unmarried. Her affair was with the late actor Siddharth Shukla. She became quite popular among the audience for her pairing with Sidharth in Bigg Boss 13.

The total net worth of Shahnaaz Gill is around ₹31 crores. She has earned crores of rupees so far by working on albums and films. Apart from this, she has a tremendous fan following on Instagram where she charges around ₹8 lakh for a promotional post. Shehnaaz is fond of singing and dancing since childhood. She has also lent her voice to many Punjabi songs.

She has very luxurious houses in Chandigarh and Mumbai. Apart from this, he is also fond of cars. They have luxury vehicles like Range Rover S5, Honda City, Jaguar, Mercedes Benz, and BMW X3.

Some Interesting Facts About Shehnaaz Gill:

Que. Who is the husband of Shehnaz Kaur Gill?

Ans. Shehnaz Kaur Gill is in a deep relationship with the Late actor Sidharth Shukla. Sidharth Shukla and Shehnaaz Gill were reportedly planning to get married in December 2021.

Que. Why is Shehnaz Gill so popular?

Ans. Shehnaz Gill is so much popular as a contestant from the famous tv show Bigg Boss 13. She has been featured in many famous music videos like Shona Shona, Bhula Dunga, Viah, Yeah Baby Refix, and many more.

Ans. The total Networth of Shehnaaz Gill is 31 crore. He has very luxurious houses in Chandigarh and Mumbai. Apart from this, they have luxury vehicles like Range Rover S5, Honda City, Jaguar, Mercedes Benz, and BMW X3.

Ans. No, They did not married.

Ans. Both were dating each other.

This is the full details on Shehnaaz Gill Biography, Age, Height, Cast, Birthday, Husband, Net Worth & More. Please share this post with your friends and visit us on celebwale.com for famous personalities and trending people’s biographies with updated details. If you have any thoughts, experiences, or suggestions regarding this post or our website. you can feel free to share your thought with us.