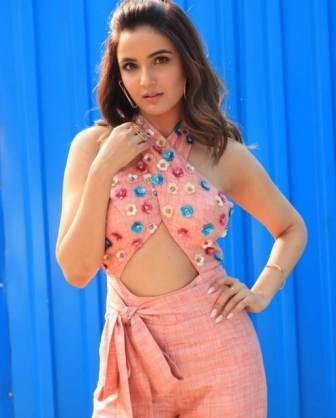 Jasmin Bhasin is a famous Indian television actress who has worked in Hindi TV serials as well as many South Indian movies. She was born on 28 June 1990 in Kota, Rajasthan. She completed her schooling in Kota itself, after which she did a hospitality course from Jaipur. Jasmin belongs to a Sikh family. After completing her studies, she started working as a marketing intern at American Express. Later she also did an internship in hospitality.

During her internship, she got a chance to work on some modeling assignments. After which she worked for many ads, print, and television. Seeing her working as a model in a jewelry advertisement, she was noticed by a Tamil director. After which the director offered Jasmin a role in the Tamil film Vaanam and in the year 2011, Jasmine Bhasin stepped into the film world. Jasmin Bhasin started her career with Tamil films. In the year 2011, she acted in the Tamil film ‘Vaanam’.

After this, she did many South films, including films like Karodpathi, Veta, Ladies & Gentleman, Jil Jung Jak. Bhasin, who made her screen debut in Tamil films, did a television serial in the year 2015, after which she became famous from house to house. Jasmin Bhasin, who started her television career with the 2015 serial ‘Tashan-e-Ishq’, played the lead role in the show. She played the character of actress Twinkle Taneja in the serial. People liked the role of Babli actress very much.

For this, she was also awarded the Best Debut Female Award. Jasmin worked as the second lead in the Siddharth Shukla and Rashmi Desai starrer show ‘Dil Se Dil Tak’ in the year 2017. This show gave him a different identity. After this, she appeared in the serial ‘Dil To Happy Hai Ji’ in the year 2019. This show brought her household name and today she has become a big face of television.

But due to a change in the story, she decided to move out of the show soon as she was uncomfortable playing the role of mother, her place in the serial Donal Bisht took it. Apart from being Ekta Kapoor’s Naagin and working in daily soaps, Bhasin has been a part of many reality shows. She participated in Khatron Ke Khiladi Season 9. Jasmin was the most popular actress this season. After this, she was seen doing comedy in Bharti and Harsh’s show Khatra-Khatra.

Jasmin Bhasin also participated in Bigg Boss season 14 as a contestant. In the year 2022, her Punjabi film Honeymoon is set to release in theaters soon. Apart from this, she has also become active in music videos from the year 2021.

She has worked on a total of 9 music videos so far in which her most popular music video is Pyaar Karte Ho Na which has got more than 57 million views on YouTube so far. Apart from this, in 2018, Jasmin Bhasin was included in The Times of India’s list of Most Desirable Women of Indian Television at 16th place, 12th in 2019, and 3rd in 2020.

Jasmin Bhasin’s age in 2022 is 32 years. She is a very beautiful and hot TV actress. The audience is crazy about her complexion and body figure. At the age of 32, she is a very hot and attractive personality girl.

To maintain her body, she workouts daily in the gym for a long time and follows her diet strictly which keeps her body fit and fine and healthy. Jasmin is one of the known actresses in the TV industry.

Jasmin was born in a middle-class Sikh family in Rajasthan. His entire family follows the Sikh religion and believes in the Sikh Guru. Jasmin Bhasin’s father’s name is Surpal Bhasin and her mother’s name is Gurmeet Kaur Bhasin. Apart from her parents in her house, there is also a younger brother named Mankaran Singh. Talking about Jasmin’s marital status, she is currently unmarried and in a relationship with TV actor Aly Goni.

Both of them met for the first time in the show Khatron Ke Khiladi, after which both of them became very good friends. After this, both of them were seen together in the reality show Bigg Boss. Although Aly had come to make Jasmin win the show, she later became an important part of the show himself. People love their chemistry in this show. As soon as the show ended, both of them started a new love-filled relationship.

Jasmin’s father had come to meet him on the show where he expressed displeasure over his closeness to Aly. But both of them are together and their pictures are often seen on social media. After leaving the show, both were seen together in the songs Tera Suit, and Tu Bhi Sataaya Jayega.

Here are given the username of various social media platforms of Bhasin Instagram, Facebook, and Wikipedia links. Her account is present on all social media platforms where she shares her new pictures with her fans. She makes fans crazy with her stunning look. Jasmin’s account is present on Instagram where she is followed by about 6.5 million people and the number of her posts is more than 1.5k. Jasmin’s Bhasin Instagram photo which was extremely hot and sexy has gone viral.

She is also present on Facebook where she is followed by about 6.8 million people. Wikipedia has also covered Jasmin Bhasin on its page. Apart from this, she is also present on Twitter where she keeps sharing her thoughts through tweets with her more than 250k followers. In the table below, we have shared with you the links of all their social media platforms, by clicking on which you will be able to access their profile page directly.

Jasmin’s favorite actor is Shahrukh Khan and Hrithik Roshan. Among actresses, her favorite actress is Katrina Kaif. Her favorite sport is Cricket and she loves to watch this sport in her free time or in the stadium. Her favorite singer is Lata Mangeshkar and Kanika Kapoor and her hobbies are reading, cooking, and dancing.

Jasmin Bhasin is an Indian actress and model and she is known for the role of Twinkle Taneja Sarna in Zee TV’s Tashan-e-Ishq, and Teni Bhanushali in Colors TV’s Dil Se Dil Tak.

Jasmin is an actress in the Tamil movie industry and she does there many films. Some of them are

Talking about Jasmin Bhasin’s total net worth, her net worth is around ₹12 crores. Jasmin, who has made her special identity in the world of TV, has found her place in acting on her own. Jasmin is an actress who has earned crores of rupees today by making a career on her own. This actress has assets worth crores of rupees as of today. The actress has earned this through modeling, advertising and acting.

Some Interesting Fact About Jasmin Bhasin:

This is the latest information on Jasmin Bhasin Biography, Wiki, Age, Relationship, Net Worth & More. Share this post with your friends and keep visiting us on celebwale.com for famous personalities and trending people’s biography with updated details. If you have any thoughts, experiences, or suggestions regarding this post or our website. you can feel free to share your thought with us.