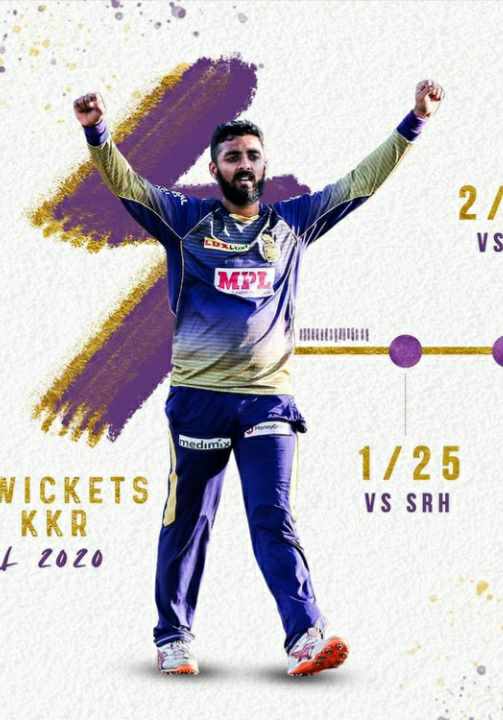 Varun Chakravarthy known as a mystery bowler was born on August 29, 1991, in Bidar, Karnataka. He did his schooling at St. Patrick School, Chennai. Initially, he started playing cricket with a tennis ball as a wicketkeeper-batsman. At the age of 17, he decided to quit playing cricket and pursue his further education in architecture. With this plan, he took admission to S.R.M. University, Tamil Nadu, and graduated from there.

Due to injury, he became a spin bowler. For the first time, he came into the limelight when he was playing for Siechem Madurai Panthers in the Tamil Nadu Premier League (TNPL) season of 2018. In that tournament, he bowled 40 overs of which he delivered 125 dot balls with a great economy of 4.7. He picked 9 wickets after playing 10 matches in that season of Tamil Nadu Premier League.

Varun Chakraborty is an Indian mystery spinner cricketer who can bowl with many different variations. According to him, he can bowl with 7 different variations. Varun specializes in throwing balls such as offbreak, legbreak, googly, carrom ball, slider, flipper, and topspinner. In 2018, he was seen playing for the Madurai Panthers team in the Tamil Nadu Premier League.

In this article, he bowled 240 balls in call 10 matches, out of which he took 125 dot balls and took a total of 9 wickets. He came to Limelight for the first time with his excellent performance. He then had a terrific performance in the Vijay Hazare Trophy, joining him as a player in the List A category in Tamil Nadu. Varun performed brilliantly in the Vijay Hazare Trophy, taking 22 wickets for runs at an average of 4.2.

Then he was selected as a net bowler in the IPL for Chennai Super King and Kolkata Knight Rider for the first time where he bowled the net for both these teams. After this, in the IPL Auction 2018 for the Indian Premier League held in 2019, the team Kings XI Punjab included Varun in their team with a bid of ₹8.4 crores. In IPL 2019, he made his debut against Kolkata Knight Riders while playing for Punjab.

In his debut match, Varun bowled very poorly where Sunil Narayan scored 25 runs including three sixes in the very first over of his IPL career. In that IPL season, he had only one chance to play 1 match. After this, the team Kings XI Punjab released him from his team for the IPL matches to be held in the year 2020. Where he had included Varun in his team by bidding ₹4 crores in Kolkata Knight Riders in the IPL 2019 auction.

After joining IPL 2020, he played 5 wickets for 20 runs against Delhi Capitals in Abu Dhabi, playing for Kolkata Knight Riders. This was his best IPL performance till now. He played a total of 13 matches in IPL 2020. He is also bowling for Kolkata Knight Riders in IPL 2021. Varun was also selected for the Indian team in the year 2021. When the Indian team went on tour to Australia,

Varun Chakravarthy’s age is 31 years old in the year 2022. He exercises very hard daily for hours in the morning and evening to keep his body fit. He is a sportsperson who needs to keep his body fit, apart from this, he keeps practicing and exercising on the cricket field for hours.

Chakravarthy was born into a thriving Hindu family in Karnataka. His family believes in Hindu customs and beliefs. He also has faith in Hindu deities and worships them. Varun Chakravarthy’s father’s name is C.V. Vinod, who works in Bharat Sanchar Nigam Limited (BSNL) and his mother’s name is Malini Chakravarthy, who is a housewife.

His list of favorite things of Varun is not available on the Internet. His favorite actor is Thalapathy Vijay and he loves to play cricket. His favorite players are MS Dhoni and Virat Kohli.

Talking about the net worth of Varun Chakravarthy. According to sources, the charges are around ₹100k to ₹150k for playing a cricket match for the IPL team. The main source of his earnings is playing cricket for the IPL team. His total net worth is approx ₹15 crores to ₹20 crores.

Varun Chakravarthy’s account is available on Twitter, Instagram, and Facebook, where his followers number in the millions. He keeps sharing his photos and latest videos on his social media platforms. Apart from this, it is also available on Wikipedia where you can get more information about them. We have given all their social media links in the table, by clicking on which you will be able to access their profile page directly.

Some Interesting Facts About Varun Chakravarthy:

This is the full details on Varun Chakravarthy (Cricketer) Biography, Age, Height, Girlfriend, Father, Family, Wife, Net Worth & More. Please share this post with your friends and keep visiting us on celebwale.com for famous personalities and trending people’s biography with updated details. If you have any thoughts, experiences, or suggestions regarding this post or our website. you can feel free to share your thought with us.