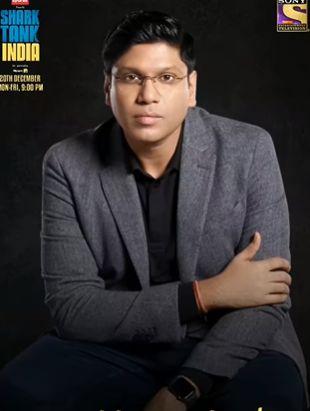 Peyush Bansal is an Indian businessman and entrepreneur who is the co-founder and CEO of the eyewear company Lenskart. In the year 2022, he is in the news for joining Sony TV’s business reality show Shark Tank India as a shark. Lenskart owner Peyush Bansal was born on 26 April 1985 in New Delhi.

He came from a simple family and did his early education at Don Bosco School in Delhi. He was a very educated boy from the beginning, who passed his class 10th and 12th board exams with good marks.

After completing 12th, he wanted to take admission in IIT to do graduation but it could not happen. After Intermediate, he worked hard for the IIT entrance exam but he could not clear the entrance exam, after which his dream of studying at IIT could not be fulfilled.

After this, he did not lose the struggle and after fighting with his parents, he somehow went to Canada to study. Where he enrolled at McGill University in Canada. Peyush Bansal holds a Bachelor of Engineering degree in Electrical IT, Control & Automation from McGill University.

Although he had gone to Canada to study but he did not have enough money to take good care of himself and fulfill his daily needs. To fulfill his desires, he used to do a part-time job as a receptionist during his studies. While doing the job, he got acquainted with a senior in his own college who used to do coding.

Peyush Bansal also had a lot of interest in coding, after which he also expressed his desire to do coding. The senior, holding a Visual Basic Plus book in his hand, told him to read it and learn to code.

Peyush, working hard day and night, read that coding book and coded new things, and gave it to his senior. The senior liked his code very much and offered him a coding job from the receptionist. Now he had turned from a receptionist to a coder.

Gradually, his passion for coding grew and his part-time job became full-time during summer vacation. Whatever he studied in college was theoretical, but his coding job was completely practical, which gave him an opportunity to make connections with the consumer.

It was a different world to him when he went to do an internship at Microsoft for 3 months. There were many intelligent people working to change the world and during that time Peyush also got an opportunity to visit Bill Gates’s house, after which he started considering him as his inspiration.

When Peyush Bansal returned to his college after finishing his internship, he was determined to work for Microsoft company. From 2002 to 2006, he finished his college studies and shifted from Canada to the US, after which Peyush started working at Microsoft in January 2007. He worked for almost 1 year at Microsoft and he got to learn a lot working there.

In Microsoft, he learned the process of solving the customer’s problem, he learned that if any problem comes to the customer, then he should solve it by putting in his full effort. During that time he had a dream that he has to change the world, he does not have to improve any product.

After this, he left his job in December 2007 and came back to India because he felt that there were more problems in India. After coming to India, he did MPEFB, a Management course from the Indian Institute of Management, Bangalore, and came back to Delhi. With the zeal to do something, he came back to his house and made his car garage into an office.

After this, he consulted the students of Delhi University and established a classifieds portal SearchMyCampus.com with his money earned in Microsoft. Through this portal, students were able to fulfill their job, housing, coaching, books, and transportation needs. Although Peyush Bansal had no business plan and no business experience.

He only believed in his experience in Microsoft that if he works for the betterment of the consumer, then it will take the form of a business in the future. He met many people while working at searchmycampus.com. During this, he met Amit Chaudhary, who later became the second founder of his company Lenskart.

Amit did not have any house to live in, so he started living in his house along with Peyush. With Amit’s support, he got the zeal to do something big, during which he read in an article that 40% of the world’s blind people live in India.

He read that almost half of the Indians in India need glasses but about 25% of them are able to wear glasses. After reading this article, he felt that no one is solving this problem nor is paying attention to it, then he can solve this problem and change the world, and can also create a big business.

Then he teamed up with his second founder Amit Choudhary to find his third, founder Sumit Kapahi from LinkedIn, who had already worked in an eyewear company. Sumit was older than Peyush and Amit but he too had left his job with an eyewear company at that time. After that, the trio together founded Lenskart in 2011.

During that time Peyush also got the support of some investors, then he did not do the negotiation with those investors, and the path of success kept on growing. Today marks 11 years and the total net worth of Lenskart stands at Billion Dollars. Today Lenskart is providing its services not only in India but also abroad.

In the year 2022, Peyush Bansal is appearing on TV for the first time in a show. He is participating as a shark in Sony TV’s show Shark Tank India where besides him, some popular businessmen like Ashneer Grover, Vineeta Singh, Aman Gupta, Anupam Mittal, Namita Thapar, Ghazal Alagh are involved as Shark on the show.

This Sony TV show Shark Tank India is showing business and investment-related things in which many entrepreneurs from across India tell their business ideas and ask sharks to invest in their business.

Peyush Bansal’s age is 37 years old in the year 2023. He is a young entrepreneur and businessman who is taking his business to new heights every day. Talking about Peyush’s fitness, he likes to stay fit, so whenever he gets time, he does walks and light exercise, and jogging, so that he can maintain his health. Apart from this, he also takes care of his diet routine and prefers to take only nutritious things in food.

Peyush Bansal’s height is 5 feet 8 inches, which is 173 centimeters. His body weight is about 75 kg, he takes a proper diet to keep his body fit so that his body measurement is 42-36-14. His eye color is Black, and his hair color is also Black.

Talking about the total net worth of Peyush Bansal, his net worth is around ₹600 crores. He is the owner of Lenskart company, which is famous for selling glasses online. He is known to lead a luxurious life with many luxury vehicles like BMW, Mercedes, Audi, and Land Rover to roam around. In addition, he has also invested in an employee engagement platform at Feedo and dailyobjects.com, a lifestyle brand.

Peyush Bansal’s account is present on all social media platforms except Facebook. He is present on Instagram where he has more than 120k followers and his number of posts is more than 70. He keeps sharing photos and videos with his followers through his Instagram account. We could not get any information about his Facebook account. Wikipedia has not yet covered Peyush on its page.

Apart from this, he is present on Twitter where he keeps sharing his thoughts through tweets with his more than 35k followers. He is also present on LinkedIn where he has more than 5k connections. In the table below, we have shared with you the links to all his social media profiles, by clicking on which you will be able to access his profile page directly.

Some Interesting Facts About Peyush Bansal:

Disclaimer: All images are available on the Peyush Bansal official Instagram Account. Images can be taken from his official Instagram account for educational purposes. Image Credit goes to the respective owners of the Image Creator. We try to gather accurate data but sometimes there might be some mistakes, Kindly let us know if you find mistakes, and we would correct them. We do not take any Guarantee/Claim That the information we have gathered is 100% correct.

This is the full details on Peyush Bansal Biography, Age, Height, Education, Family, Wife, Net Worth & More. Share this post with your friends and keep visiting us on celebwale.com for famous personalities and trending people’s biography with updated details. If you have any thoughts, experiences, or suggestions regarding this post or our website. you can feel free to share your thought with us.