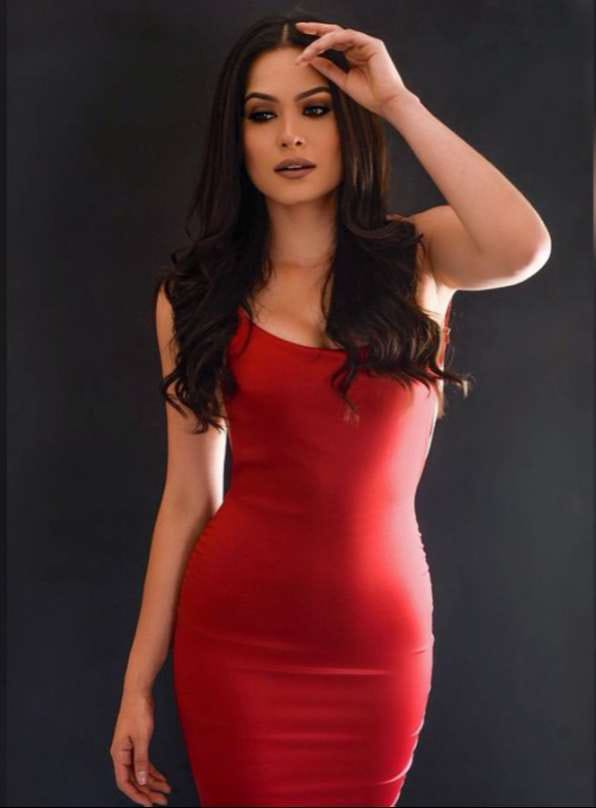 Andrea Meza is a model and beauty pageant titleholder from Mexico, who won the Miss Universe Crowned held in 2021. Andrea was born on 13 August 1994 in the city of Chihuahua, Mexico.

Her full name is Alma Andrea Meza Carmona. She grew up in the city of Chihuahua and from there she also got the early education of her career. Due to being good at her studies, she continued her studies even further.

After completing her secondary school education, she enrolled in Autonomous University in Chihuahua City to pursue graduation. Where Andrea completed her B.S. in computer science at this university.

She completed her graduation degree from the Autonomous University of Chihuahua in the year 2017. Andrea, after obtaining her degree, worked as a software engineer at a software company in Mexico in her early life.

Since her childhood, Andrea aspired to pursue a career in modeling, working in her company as well as modeling.

Meza first began her pageantry career in 2016, after which she was selected to represent the city of Chihuahua in Miss World Mexico 2016. In this pageant contest, Meza was first selected for Top 16, then Top 10, and then Top 5.

After Meza reached the top 5, she was one of the two contestants who were awarded the crown, and she was crowned Miss Mexico 2017.

The date 18 November 2017 was one of the most special dates in Meza’s life, the day she arrived at the Sanya City Arena in Sanya, China, to attend Miss World 2017, where she was representing her country Mexico. Meza won the Head-to-Head Challenge of 16 groups by participating in pre-pageant activities, which made them enter the top 40 of the contest directly.

During the final competition of Miss World, Meza was ranked directly in the Top 15 from the Top 40, then in the Top 10 and Top 5. She was giving tough competition to other contestants after Meza finished in the top 5.

In a very tough competition, the jury decided that Manushi Chhillar of India was crowned Miss World 2017 and Andrea Meza was the Contest’s first runner-up. Meza was also awarded the crown of Miss World America and Miss World Continental Queens of Beauty.

In the year 2020, Meza won the title of Mexican Universal Chihuahua enabling her to participate in Mexican Universal 2020, where she represented the city of Chihuahua. A total of 6 challenges were won including the sports challenge by participating in the pre-pageant activities held before the contest. Due to this, she was directly selected in the top 15 in the contest.

Due to its tremendous performance in the top 15, it made it to the finals which were held on 29 November 2020 in the city of Querétaro. In the finale of the contest, she won the crown of Mexicana Universal 2020, impressing the jury with her performance.

Miss Universe 2020 Andrea Meza won the most prestigious international competition after competing with 73 other delegates from around the world at the Miss Universe 2020. The contest was held at the Seminole Hard Rock Hotel & Casino in Florida city of the United States of America (USA) in the year 2021.

Andrea Meza’s age is just 28 years old in 2023. She is a model who is known throughout the Universe for her beauty. Recently she won the title of Miss Universe 2020. To maintain their beauty, they have to pay special attention to their body.

In addition to her parents in Andrea’s home, she also has two younger sisters named Karen Meza and Mariana Meza. Talking about Andrea’s marital status, she is engaged and has an affair with a boy named Jorge Saenz. Andrea got engaged to his husband Jorge Saenz on 30 Sept 2019.

Talking about the net worth of Andrea Meza according to sources, she has a total net worth of $2 Million – $3 Million USD. The main sources of her earnings are advertising and sponsorship.

Meza has also been featured on Wikipedia. She is known for sharing the latest photos and videos on her Instagram account. Below we have shared with you all the links to Andrea’s social media profiles in the table, by clicking on them you will be able to access their profile page directly.

Some Interesting Facts About Andrea Meza:

This is the full details on Andrea Meza (Miss Universe 2020) Biography, Age, Height, Figure Size, Married, Husband, Family, Net Worth & More. Share this post with your friends and keep visiting us on celebwale.com for famous personalities and trending people’s biography with updated details. If you have any thoughts, experiences, or suggestions regarding this post or our website. you can feel free to share your opinion with us.