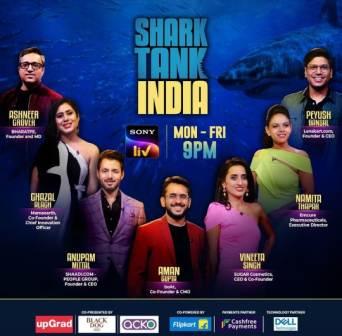 Shark Tank India is an American entrepreneur-themed Indian business reality show. This reality show is produced by Studionext and is being telecasted on the Sony TV channel. The channel announced on Tuesday, 22 June 2021 that the registrations for young entrepreneurs have started.

Sony TV has also shared a video on its social media handle announcing Shark Tank India which shows a young man wanting to start his own business. While their family and friends offer support. They really make fun of her big dreams. However, he believes that when experts approve his plans, the world will listen to him.

At the same time, the tantrums will stop. The shows are mainly based on promoting the young and struggling businessmen of the country. Sony TV shared the video on Twitter. The caption in the post reads that the world’s number 1 business reality show Shark Tank is coming to India. Where Sharks, ie experienced businessmen from India, will test, stare and grow your business and business idea.

To participate in this show one has to register online on SonyLIV. After that, you have to fill out a form. The team has asked you to clearly describe your business to get a chance to appear on the show. Let us tell you that this show based on the American reality show will be broadcast in India from 20 December 2021 from Monday to Friday at 9 pm.

The show is based on the famous American reality show Shark Tank which first premiered on August 9, 2009, on the American popular channel ABC Network. About 12 seasons of the show have been aired on ABC Network so far. Rannvijay Singha is going to host Shark Tank India.

Talking about the judges of the show i.e. Sharks, Peyush Bansal, Ghazal Alagh, Vinita Singh, Anupam Mittal, Ashneer Grover, Aman Gupta, and Namita Thapar will be seen. The show comprises 7 judges out of which only 5 judges will be seen in each episode.

This is the full details on Shark Tank India Judges, Sony Tv, Wiki, Time, Cast, Registration, Review, Sharks, Host, Release Date, Audition 2021 & More. Share this post with your friends and keep visiting us on celebwale.com for such an entertaining post. If you have any thoughts, experiences, or suggestions regarding this post or our website. you can feel free to share your thought with us.