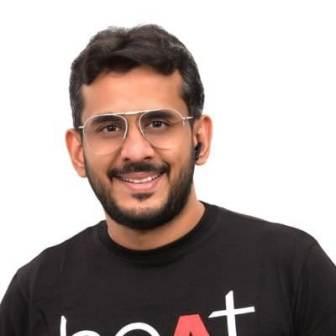 Aman Gupta is an Indian businessman Co-founder and chief marketing officer of the earwear company boAt. Nowadays he is in the news for joining Sony TV’s reality show Shark Tank India as a shark. Aman Gupta was born on 4 March 1982 in New Delhi, India. He completed his early education at Delhi Public School located in RK Puram, Delhi.

After completing his Intermediate studies, he joined Shaheed Bhagat Singh College, Delhi from where he obtained his Bachelor of Commerce (B.Com) degree. After doing B.Com, he obtained the degree of Chartered Accountant (CA) from The Institute of Chartered Accountants of India at the behest of his family members. After becoming a CA, he worked as an assistant manager at Citibank for about 2 years, but he was not enjoying working for Citibank.

He wanted to do something big for himself or something but he could not understand where to start. After working at Citibank from 2003 to 2005, he started a business with his father named Advanced Telemedia Private Limited. He used to sell for big brands through his company, but seeing the growing business of the company in India, the company decided that he would open an office of his own in India.

After this, Aman’s company which he had opened with his father was closed. Aman Gupta got married and at the behest of his wife Priya Dagar, he studied MBA from Indian Business School. After finishing his MBA, in 2011, Aman worked as a Senior Management Consultant at KPMG International Limited. In 2012, he switched companies and joined Harman International where he got an opportunity to work as Director in Sales.

After assuming the post of Sales Director for about 2 years, Aman left this company as well. They didn’t understand what they were doing. Till that time all the friends of Aman were doing something good in their life, some had a good jobs and some were earning good profits in business. In the year 2014, he became the Co-founder of Imagine Marketing India, and finally, in the year 2016, he founded his own electronic company boAt with Sameer Mehta.

Initially, he invested money in the boAt and marketed the product by visiting places like cafes and socials located in New Delhi. Aman used to market his product in New Delhi and Sameer used to do marketing while staying in Mumbai. When he started his earwear company boAt, there were more than 200 earwear companies in India at that time which had already launched their product in India.

Despite so much competition in electronic products, Aman did not lose his courage and kept working hard day and night. Made your product different from others and launched in the market. Due to the good quality, gradually the sales of his product increased and the result is in front of all of you that today he has created a billion-dollar company.

Aman’s company boAt had launched its first product in the market, Apple’s charging cable, which was very strong and durable. This product was launched on Amazon which later became the largest selling product on Amazon.

At that time Apple’s customers were very upset with Apple’s charging cable, which would break or cut the lower part of the cable due to twisting while charging, then people had to put plastic tape on it so that the cable would not break further. After which the boAt company, in view of the problem of users, launched a plastic-coated cable in the market, which people liked very much.

In the year 2022, Aman Gupta is appearing on TV for the first time in a show. He is participating as a shark in Sony TV’s show Shark Tank India where besides him, some popular businessmen like Ashneer Grover, Vineeta Singh, Anupam Mittal, Peyush Bansal, Namita Thapar, Ghazal Alagh are involved as a Shark on the show.

This Sony TV show Shark Tank India is showing business and investment-related things in which many entrepreneurs from across India tell their business ideas and ask sharks to invest in their business.

Aman Gupta’s age is 40 years old in the year 2023. He is a brilliant Indian businessman who takes great care of his fitness apart from business. To maintain his fitness, he goes to the gym where he performs various exercises.

Apart from this, with the help of his personal doctor or counselor, he gets his body checked up regularly so that if he suspects any disease, he can cure it in advance. Aman also takes care of his food and likes to take more and more nutritious things in his food.

Aman Gupta’s height is 5 feet 8 inches, which is 173 centimeters. His body weight is about 75 kg, he takes a proper diet to keep his body fit so that his body measurement is 40-32-12. His eye color is Black, and his hair color is also Black.

Aman was born in an upper-middle-class Hindu family. His entire family believes in Hinduism and worships Hindu deities. Aman Gupta’s father’s name is Neeraj Gupta who is a businessman and his mother’s name is Jyoti Kochhar Gupta who is a housewife. Apart from him in his house, there is also an elder brother Anmol Gupta and a younger sister Neha Gupta.

Talking about total net worth of Aman Gupta, then his net worth is around ₹700 crores in total. She is the co-founder of the electronic earwear company boAt which manufactures earphones, headphone stereos, travel chargers, and premium rugged cables.

Apart from this, Aman’s company The Imagine Marketing India also does business with boAt. He is known to live a luxurious life, preferring to drive around in cars like Audi, BMW, and Mercedes.

Apart from this, he is also present on Twitter where he keeps sharing his thoughts with his 42k followers. Aman has more than 5k connections on his LinkedIn account. In the table below, we have shared with you the links of all their social media profiles, by clicking on which you will be able to access their profile page directly.

Talking about the awards and achievements of Aman Gupta, he was honored with the Businessman Young Entrepreneur Award in the year 2019. Apart from this, in the same year, he was also included in the list of Entrepreneur India Tech 25 Class. In the year 2020, he was the winner of Super 30 CMO’s.

Some Interesting Facts About Aman Gupta:

Disclaimer: All images are available on Aman Gupta’s official Instagram Account. Images can be taken from his official Instagram account for educational purposes. Image Credit goes to the respective owners of the Image Creator. We try to gather accurate data but sometimes there might be some mistakes, Kindly let us know if you find mistakes, and we would correct them. We do not take any Guarantee/Claim That the information we have gathered is 100% correct.

This is the full details on Aman Gupta (boAt Co-founder) Biography, Age, Height, Wife, Education, Family, Net Worth & More. Share this post with your friends and keep visiting us on celebwale.com for famous personalities and trending people’s biography with updated details. If you have any thoughts, experiences, or suggestions regarding this post or our website. you can feel free to share your thought with us.