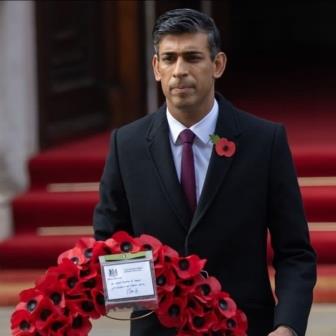 Rishi Sunak is an Indian-origin British politician who recently became the Prime Minister of the United Kingdom. Apart from this, he is the son-in-law of the famous Indian industrialist NR Narayana Murthy (co-founder of Infosys). He was born on 12 May 1980 in Southampton, Hampshire. Sunak completed his early education at Winchester College.

His school was a public boarding school for boys. He earned a bachelor’s degree in electrical engineering and physics from the University of Oxford. After that, he did post-graduation with MBA from Stanford University. While pursuing his MBA, Sunak met Akshara Murthy, daughter of Indian billionaire NR Narayana Murthy. After completing their studies, both of them got married in 2009 in Bangalore.

He started his career in 2001 with his first job as an analyst at Goldman Sachs, an American investment bank in California. In 2004, he worked at The Children Investment Fund Management. Less than a year after marrying the daughter of famous Indian billionaire NR Narayana Murthy in 2009, he quit his second job to start an investment partnership firm “Thelem Partners” with an investment of $536 million in October 2010.

In 2013 he and his wife Akshara were appointed as directors of Narayana Murthy’s investment firm “Catamaran Ventures UK Ltd”. Rishi resigned from the firm in April 2015 after joining politics in October 2014. In 2014, Rishi was selected as the Conservative MP candidate after former MP William Hague announced that he would not contest the next general election.

In 2015 he contested the UK general election from Richmond and won with a majority of 36.5%. As a Member of Parliament, Sunak served as a member of the Environment, Food, and Rural Affairs Select Committees from 2015 to 2017. In the 2017 general election, Rishi Sunak was re-elected as the MP for Richmond (York) with a huge majority of 19,550 votes (36.2%).

He held the position of Parliamentary Under-Secretary of State from 9 January 2018 to 24 July 2019. In view of his work, he was appointed as Chief Secretary to the Treasury by Prime Minister Boris Johnson on 24 July 2019. In the 2019 general elections, he was re-elected as MP when he won his third consecutive victory with a huge margin of 27,210 votes (47.2%).

Rishi’s flourishing political career saw another promotion when the former Chancellor of the Exchequer, Sajid Javid, dramatically resigned from his position and was elected as the UK’s Finance Minister on 13 February 2020. After the resignation of Prime Minister Boris Johnson in 2022, he became a strong contender for the post of Prime Minister along with Liz Truss.

Although Liz Truss was elected the new Prime Minister of Britain after getting more support, she resigned from her post after just 45 days. Rishi Sunak succeeded Liz Truss as Prime Minister after her resignation, making him Britain’s first Hindu-origin Prime Minister.

Her mother is a pharmacist by profession and she runs a local pharmacy. Sunak’s grandparents were born in the Punjab province of British India. In the 1960s, his grandparents moved with their children from East Africa to Britain. Apart from him, there is a brother and sister in Rishi’s house.

Her brother Sanjay Sunak is a psychologist and her sister Rakhi Sunak works as Head of Humanitarian, Peacebuilding, United Nations Funds and Programs at the Foreign, Commonwealth and Development Office. His marital status is married. Rishi Sunak’s wife’s name is Akshata Murthy Sunak.

According to an estimate, the wealth of both of them is more than the property of King Charles of Britain. Just before the election for the post of Prime Ministerial candidate, Rishi Sunak had built a luxurious swimming pool worth more than four and a half crores inside his luxurious mansion of ₹65 crores. Sunak is ranked 222nd in the list of rich by Sunday Times.

Sunak’s wife Akshata is the daughter of Narayana Murthy, the founder of the Indian IT company Infosys. According to media reports, Akshata Murthy’s personal wealth was $1.2 billion due to shares in Infosys a few days ago. Sunak’s wife Akshata was estimated to be richer than Queen Elizabeth II, who had a net worth of around £430 million at the time.

Sunak and his wife have three houses and flats in the UK, while California in the US has a penthouse on the edge of the Pacific Ocean. Akshata has 0.9 percent shares in her father’s company which is equivalent to 690 million pounds.

Some Interesting Facts About Rishi Sunak:

I was just out with my younger brother and younger sister, and I think, probably pretty young, I was probably a mid-teenager, and we were out at a fast-food restaurant and I was just looking after them. There were people sitting nearby, it was the first time I had experienced it, just saying some very unpleasant things. The ‘P’ word. And it stung. I still remember it. It seared in my memory. You can be insulted in many different ways, certainly in this job, but that stings in a way that is hard to explain.”

This is the full details on Rishi Sunak (Politician) Biography, Age, Height, Father, Family, Wife, Caste, Net Worth & More. Please share this post with your friends and keep visiting us on celebwale.com for famous personalities and trending people’s biography with updated details. If you have any thoughts, experiences, or suggestions regarding this post or our website. you can feel free to share your thought with us.