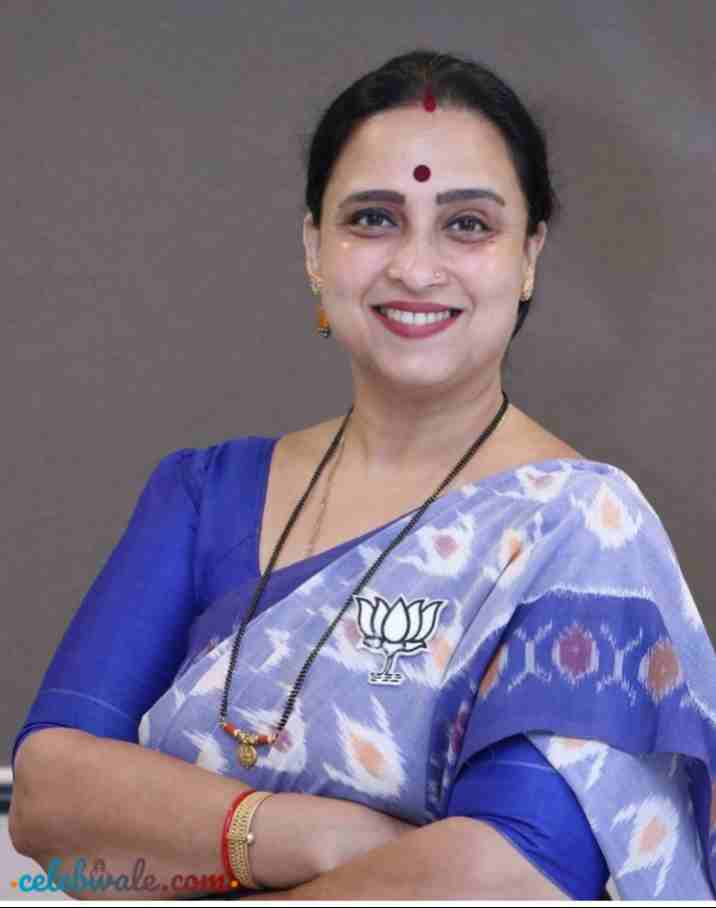 Chitra Wagh was the aggressive leader of the Congress Party and the State President of Mahila Morcha who resigned from her post in January 2021. After Chitra’s resignation, it became clear that she would now join the BJP. Meanwhile, the reason she left NCP is now coming to the fore.

Chitra Wagh was born on 16 February 1975 in Mumbai Maharashtra. She received her early education from local and private schools in Mumbai. After receiving her intermediate education in Mumbai, Chitra received her graduation from a college in Mumbai.

The NCP was supposed to play the role of the opposition after the 2014 assembly elections. At the same time, NCP gave a chance to new leader Chitra. During that time, Wagh impressed people wi aggressive rhetoric by touring across the state.

They also enabled the ability to lead women. But she was not very active last year. Chitra went to some places in the Lok Sabha elections and also visited there, but she did not have the same enthusiasm as in the past.

In 2016, when Chitra’s political career was flourishing. In 2016, her husband Kishore Wagh was caught in an Anti-Corruption Bureau investigation. Kishore was caught taking a bribe of ₹400000. The case was related to Mahatma Gandhi Memorial Hospital in Parel. Now that Chitra Wagh has joined the BJP, the BJP government will need help to protect Kishore Wagh from the matter.

Keeping this in mind, Prasad Lad, an NCP MLA a few years ago and now a BJP MLA, has played a mediating role in the entire matter. This is the reason that there was talk of the aggressive leader of NCP and State President of Mahila Morcha Chitra entering the BJP. Wagh resigned from the post of Mahila Morcha state president in the NCP party in January 2021.

The Anti-Corruption Bureau registered a case against Kishore Wagh on 12 February. She took an aggressive role against Sanjay Rathod in the suicide case. This action of anti-corruption is being seen as revenge.

Let us tell you that Chitra Wagh’s husband Kishore was working as a medical recorder at Mahatma Gandhi Hospital in Parel. In 1997, the spinal cord of the complainant’s brother was operated upon. In which he died. In this case, the complainant had filed a complaint with the National Consumer Forum.

So that in this case compensation of 15 lakhs and the victim’s family member gets a government job. Kishore Wagh, the government recordkeeper for this work, demanded a bribe of Rs 4 lakh. The victim side had complained to the Anti-Corruption Bureau.

After the FIR, Kishore Wagh was arrested on 5 July 2016 by the Anti-Corruption Bureau for laying a trap. Kishore Bagh was also sent to police custody till July 12 in this case. ACB examined Kishore Wagh’s income from 2006 to 2016. Investigations revealed undisclosed assets worth one crore with Kishore Wagh.

Chitra Waghs’s age is 47 years old in 2023. She is the Vice President of BJP leader who belongs to Mumbai. Chitra Kishore Wagh’s height is 5 feet 5 inches, which is 165 cm. Her bodyweight is 65 kg which is equal to 140 lbs and Chitra’s Body measurement is 36-28-38. Her eye color is dark black and her hair color is also black.

Chitra’s marital status is married and her husband’s name is Kishor Wagh. Both have a son whose name is Aditya Wagh and she has completed her graduation in BSc (Hons) in Banking and Finance at The London School of Economics and Political Science – LSE.

There is no clear data available related to her net worth. According to some reports, Chitra’s total net worth value is between 50 lakh to 70 lakh.

Some Interesting Facts About Chitra Wagh:

Disclaimer: All images are available on Chitra Wagh’s official Instagram Account. Images can be taken from her official Instagram account for educational purposes. Image Credit goes to the respective owners of the Image Creator. We try to gather accurate data but sometimes there might be some mistakes, Kindly let us know if you find mistakes, and we would correct them. We do not take any Guarantee/Claim That the information we have gathered is 100% correct.

This is the full details on Chitra Wagh BJP Leader, Wikipedia, Bio, Age, Social Activist, Networth, Height, Education, Instagram & More. Please share this post with your friends and keep visiting us on celebwale.com for famous personalities and trending people’s biography with updated details. If you have any thoughts, experiences, or suggestions regarding this post or our website. you can feel free to share your thought with us.