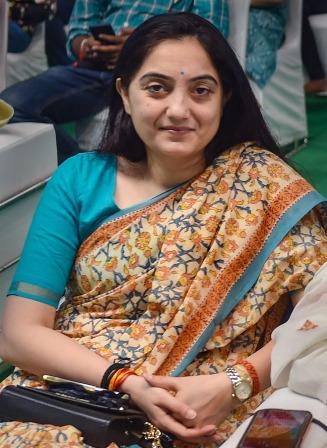 Nupur Sharma is a national spokesperson and leader of the Bharatiya Janata Party BJP who is in the news recently due to her controversial statement on Prophet Mohammad. Nupur was born on 23 April 1985 in New Delhi, India. He completed his early education at Delhi Public School. She then obtained her degree in Economics in BA and LLB degree from Hindu College, University of Delhi.

She was active in politics since her college days. Due to her good orator, she was elected as a member of the student wing of the Sangh Parivar Akhil Bharatiya Vidyarthi Parishad in 2008. After that, she went to London for her higher studies, where she obtained her LLM from the London School of Economics.

After completing her law studies in London, she came back to India in 2010 and started her political career by joining the BJP party as a worker. She had worked with senior BJP leaders like Arvind Pradhan, Arun Jaitley, and Amit Shah in 2013.

Apart from this, she had also done many welfare works while serving as the President of the Delhi University Student Union (DUSU), which included works like Solar Lamp Installation, Water Purifier, and CCTV Camera for Campus Security. She also contested against Arvind Kejriwal in the 2015 Delhi Assembly elections in which she had to face defeat.

Nupur Sharma’s political career started in her college days. She was elected as a member of Akhil Bharatiya Vidyarthi Parishad, the student wing of the Sangh Parivar in 2008. Later she also held the post of President of the Delhi University Student Union where she also did many welfare works. In 2010, she joined BJP as a worker. In 2013 she joined as a member of the Delhi BJP Working Committee where she got the opportunity to work with senior leaders like Arun Jaitley, Amit Shah, and Dharmendra Pradhan.

In 2015, Nupur was elected as a candidate in the 2015 Delhi Assembly elections by the BJP party against Aam Aadmi Party leader Arvind Kejriwal. However, in the 2015 Delhi Assembly elections, BJP candidate Nupur lost to AAP candidate Kejriwal by a margin of 31000 votes. Nupur gained a lot of popularity after losing this election, after which she was appointed as the official spokesperson of the BJP Delhi unit.

Nupur was appointed as the National Spokesperson of BJP in 2020 headed by JP Nadda. After becoming a spokesperson, She was sent for TV debates on national issues because of her legal skills, good knowledge of national issues, and bilingual skills.

During a debate on a news channel on 27 May 2022, BJP spokesperson Nupur Sharma made a controversial statement against Prophet Mohammad, after which Arab countries started criticizing India. Seeing the matter increasing, BJP expelled him from the party for 6 years on 5 June 2022. During the debate on the Gyanvapi issue, Islam’s spokesperson made fun of Hindu deities before him, after which Nupur also made controversial statements about Prophet Mohammad.

After this, on June 10, 2022, after the Islamic prayers, stones were pelted by Muslims all over the country, causing tension in the entire country. In many places, Muslim ummahs raised slogans against Nupur Sharma and asked to behead her.

Nupur Sharma’s age is 37 years old in 2022 and she was a famous youth spokesperson of the Bharatiya Janata Party (BJP). She also takes healthy food to keep maintain her health. Nupur Sharma’s height is 5 feet 4 inches, which is 162 cm. Her body weight is 55 kg. Her eye color is black and her hair color is black.

Nupur was born in Delhi in a prosperous Hindu Brahmin family. His entire family believes in Hinduism and worships Hindu deities. Nupur Sharma’s father’s name is Vinay Sharma and he is a businessman. Nupur’s mother’s name is not known. Apart from his parents, there is also a younger sister in her house whose name is not known. Nupur’s marital status is Married. However, the name of her husband could not be known.

Nupur Sharma’s total net worth is ₹14.79 lakh. However, this information is very old as Nupur had given information about her assets in the affidavit filed in the 2015 Delhi Assembly elections. According to the affidavit, she also has a 2012 model Nissan Sunny car.

Some Interesting Facts About Nupur Sharma:

This is the full details on Nupur Sharma (Politician) Biography, Age, Height, Father, Family, Husband, Net Worth & More. Share this post with your friends and keep visiting us on celebwale.com for famous personalities and trending people’s biography with updated details. If you have any thoughts, experiences, or suggestions regarding this post or our website. you can feel free to share your thought with us.