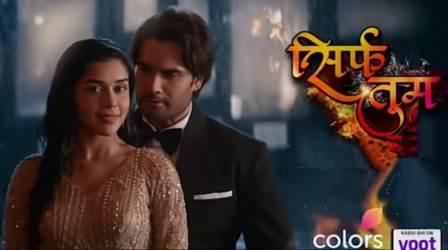 Sirf Tum is an Indian romantic drama television serial. The serial will be aired on Colors TV from November 15. This serial is inspired by the Bollywood movie Kabir Singh. In this serial, Vivian Dsena is playing the role of Ranveer Chopra in the lead role and Eisha Singh is playing the character of Ranveer Singh’s wife Suhani Ranveer Singh.

Apart from these, we will also get to see Saumya, Puneet, and Jasmeet in this serial. In this serial, we will get a chance to see the tremendous chemistry between Ranveer and Suhani. Luck also tries to meet these two a lot.

This serial is made under the banner of Rashmi Sharma Telefilms. The first promo of the serial was released on 11 October and the second trailer was released on 30 October. Looking at the trailer, it can be guessed that Vivian and Isha will be the main characters of this serial.

This serial will replace Barrister Babu. The show will be aired on November 15 at 8 pm on Colors TV and the time slot of Balika Vadhu will be changed to 8:30 pm.

After a short break, TV’s famous actor Vivian Dsena is returning to the small screen. Along with him, TV actress Eisha Singh is also getting ‘Ghar Wapsi’ on Colors TV.

Whenever you fall in love with someone, it becomes difficult to see anything other than love. Because the key to your heart is in the hands of someone special. The new show coming soon on Colors TV is going to awaken the same beautiful feeling of love in everyone’s heart. In this serial, the audience will get to see the story of Ranveer and Suhani.

Ranveer’s character is like a fire that cannot be extinguished, and Suhani’s character is completely different from Ranveer’s, calm, soothing, and fire-fighting like water.

In the upcoming serial ‘Sirf Tum’ on Colors TV, Ranveer and Suhana will be seen tying a bond of love despite being completely different from each other. The love story that starts between these two is all set to attract the audience towards it.

This serial is about to bring a season of Ishq for the viewers that will shake your hearts. In this serial, famous TV actress Eisha Singh is going to be seen playing the role of Suhani. So Vivian Dsena has been chosen to play the role of Ranveer.

Expressing her eagerness to play the role of ‘Suhani’, Eisha Singh said, “This love story will be loved by audiences of all ages. Suhani is a beautiful, strong-willed character and I am really happy to get a chance to play her. After years of ‘Ishq Ka Rang Safed’, I am very excited to be back in the Colors family once again with ‘Sirf Tum’.”

Vivian Dsena will be seen in a new show after the Shakti Astitva Ek Ehsaas Ki serial. On being cast as Ranveer, Vivian Dsena said, “Colors TV has always been like home for me. Talking about Rashmi Sharma, she has always trusted me as an actor.

My character in this show is not like a normal daily soap hero, this one is completely different from the rest of my characters and that is the reason I said yes to this show. Grateful to Colors and Rashmi Sharma Telefilms for believing in me. Hope we will be able to entertain our audience and do well once again.

This is the full details on Sirf Tum Serial Cast Name, Wiki, Colors Tv Serial Release Date, Star Cast With Photo, Story, Character, Serial 2021 & More. Share this post with your friends and keep visiting us on celebwale.com for such an entertaining post. If you have any thoughts, experiences, or suggestions regarding this post or our website. you can feel free to share your thought with us.