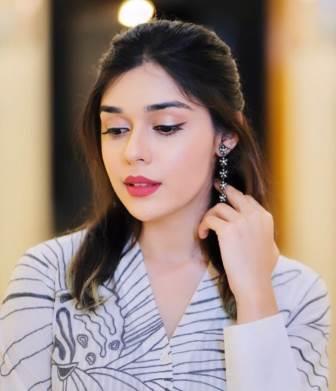 Eisha Singh is an Indian television actress known primarily for her work in Hindi serials. She first came into the limelight for her role Dhaani in the Hindi serial Ishq Ka Rang Safed. Eisha Singh was born on 24 December 1998 in Bhopal, Madhya Pradesh. She received her early education from Shri Bhavan Bharti Public School located in Bhopal. From childhood, Eisha grew up watching films of the 80s and 90s, she was fond of acting from the 4th grade.

She always wanted to make a career in the field of acting, but there was a time when she left the dream of acting and started looking for a future in studies. However, after she passed the board exams in class 10, Eisha Singh joined Miss Teen Madhya Pradesh 2015 as a contestant. After winning this competition, she got back into acting and started dreaming of becoming an actress.

After this, she started taking acting training from Alok Chatterjee and Balendra Singh Balu Theater where she did acting as well as theater. After becoming proficient in theatre, she moved to Mumbai to pursue a career in acting and made her debut in the Hindi television industry at the age of 16. After getting the debut lead role in Colors TV serial Ishq Ka Rang Safed in the year 2015, Eisha told in an interview that

“I was asked by one of my uncles living in Mumbai (who is himself associated with the TV industry) to come to Mumbai and give an audition and I did the same. About a month later, I got a confirmation call informing her that she has been selected for the lead role in “Ishq Ka Rang Safed”.”

Her role in the serial Zara got a lot of love from the audience and got a new identity in the industry. In the year 2020, she appeared in the serial Pyar Tune Kya Kiya in the role of Preet. After that in 2021, Eisha Singh is seen in Colors TV’s romantic drama serial Sirf Tum in the role of Suhani Sharma. Which is also being well-liked by the audience. Apart from working in TV serials, she has continued her studies and is studying Bachelor of Commerce from a college in Mumbai.

Eisha Singh’s age is 23 years old in the year 2022. She is one of the best actresses in the TV industry who is known for her beauty. Being a popular actress, she also has to take great care of her body and beauty. To maintain her body, she regularly does various exercises in the gym. Apart from this, she also does yoga for her physical and mental strength.

In an interview, while disclosing her beauty secret, she told that she relies on home remedies for her skin treatment. She consumes plenty of green fresh fruits to keep her face fresh, which makes her face glow. Apart from this, she also takes special care of her diet and consumes only green fresh seasonal vegetables in the food, which helps her to stay healthy.

Eisha was born in an upper-middle-class Hindu family. His family believes in Hinduism and worships Hindu deities. Esha Singh’s father’s name is Pankaj Singh and is a businessman in Bhopal while her mother Rinku Singh runs a playschool. Due to the busyness of her parents, Eisha spent her childhood with her grandparents.

Apart from her parents in the family of Eisha, there is also a younger brother named Rudraksh Singh. Talking about Eisha Singh’s marital status, she is unmarried, due to which her husband’s name is not known. The news of their affair is also not present on the internet media, due to which the name of Eisha’s boyfriend could not be known.

Eisha Singh is also covered by Wikipedia on its page. Apart from this, she is also available on Twitter where she shares her thoughts through tweets with her more than 7k followers. In the table below, we have shared the links of all her social media profiles with you, by clicking on which you will be able to access her profile page directly.

Talking about the total net worth of Eisha Singh, her net worth is around ₹1.5 crores. Her main source of earning is from acting in TV serials. They range from around ₹50k to ₹70k per episode. Apart from this, she also charges up to lakhs of rupees by promoting some brands on her social media.

Talking about the awards and achievements of Eisha Singh, in the year 2013, she participated for the first time in Miss Teen Madhya Pradesh where she was the winner of the contest at the age of 15. In 2018, Eisha started playing the role of lead actress Zara in the serial Ishq Subhan Allah.

This show took her popularity from house to house and made him the star of the TV industry. Her work in this serial was highly praised, for which Isha was also honored with many awards. She has received Best Actor Female, Social Swagger Award, and Best New Jodi Awards.

Some Interesting Facts About Eisha Singh:

This is the latest information on Eisha Singh Biography, Wiki, Age, Height, Family, Husband, Net Worth & More. Share this post with your friends and keep visiting us on celebwale.com for famous personalities and trending people’s biography with updated details. If you have any thoughts, experiences, or suggestions regarding this post or our website. you can feel free to share your thought with us.