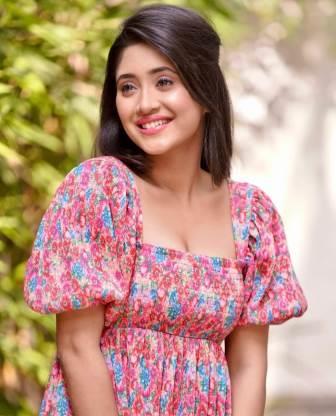 Shivangi Joshi is an Indian model and television actress who is predominantly known for doing Hindi TV serials. She is mainly known for her roles in Naira Singhania Goenka and Sirat Shekhawat Goenka in the Star Plus serial Yeh Rishta Kya Kehlata Hai. Shivangi is a very beautiful actress who was born on 18 May 1995 in Dehradun, India.

She completed her early education at Pine Hall School in Dehradun. Her childhood was spent around Rishikesh. She is a trained Kathak dancer and used to participate in many dance competition shows during her school days. She was also completing her higher studies in Dehradun itself.

But later she took a year’s break from her studies to try her luck in the TV industry. She then moved to Mumbai where she got a chance to work in the 359th episode of the serial Parvarrish Kuchh Khattee Kuchh Meethi in 2013 after some auditions. She played that one episodic role well, after which she never looked back.

She made her debut in 2013 by playing the character of Nisha in the Zee TV serial Khelti Hai Zindagi Aankh Micholi. In the same year, she also appeared in the role of Aayat Haider in the Colors TV serial Beintehaa. She became a hit with this serial and her role in the serial was well received by the audience.

After that, she played the role of Naira Singhania Goenka and Sirat Shekhawat Goenka in the serial Yeh Rishta Kya Kehlata Hai which aired on Star Plus from 2016 to 2021. She became famous from house to house for her role in this Star Plus serial.

In 2021, Shivangi played the lead character of Anandi Bhujariya in Colors TV’s famous serial Balika Vadhu 2. Now in 2022, she will be seen as a contestant in Colors TV’s popular stunt reality show Khatron Ke Khiladi season 12.

Shivangi Joshi’s age is 27 years old in the year 2023. She is a fitness freak girl who takes full care of her body maintenance. She keeps herself fit through yoga and workouts. She likes to work out in the gym for hours.

Shivangi was born in an upper-middle-class Hindu family. His entire family believes in Hinduism. Shivangi Joshi’s father’s name is Suman Prakash Joshi and he is a government employee. Her mother’s name is Yashoda Joshi and she is a housewife. Apart from his parents, she has an elder sister Sheetal Joshi and a younger brother Samarth Joshi.

Shivangi’s marital status is still unmarried but her boyfriend’s name is Mohsin Khan. Mohsin Khan is an actor who has appeared in the Star Plus serial Ye Rishta Kya Kehlata Hai opposite Shivangi in the lead role. Shivangi has been seen with Mohsin on many occasions.

The total net worth of Shivangi Joshi is around ₹37 crores. Her source of income comes from acting in TV serials. She charges up to ₹1.5 lakh per episode. Apart from this, she has also done many television advertisements for which she charges up to lakhs of rupees.

She is also fond of traveling in expensive vehicles. She has the latest model of Jaguar which is worth crores. In 2022, she is participating as a contestant in Colors TV’s stunt reality show Khatron Ke Khiladi Season 12 where she is charging ₹7 lakhs per week.

Some Interesting Facts About Shivangi Joshi:

This is the full details on Shivangi Joshi Biography, Age, Height, Father, Family, Husband, Net Worth & More. Share this post with your friends and keep visiting us on celebwale.com for famous personalities and trending people’s biography with updated details. If you have any thoughts, experiences, or suggestions regarding this post or our website. you can feel free to share your thought with us.