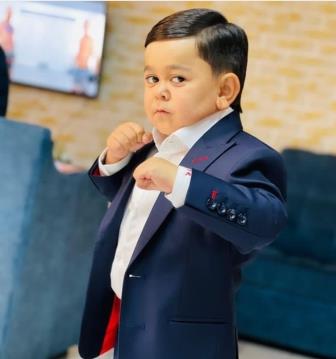 Abdu Rozik is a famous social media star and singer. He has sung various popular songs. Rozik was born on 23 September 2003 in Panjakent, Tajikistan. He completed his early education in Panjakent. He studied till class 10th, after which he left his studies to help his family financially.

After that, he started singing in the streets of Gishdarva. Initially, he had to face difficulties. The turning point in Rozik’s life came when he was noticed by Tajik blogger rapper Boron (Behrouz).

Boron also helped Abdu financially at the beginning of his career. Abdu is a young singer as well as a YouTuber. He can be seen mainly on the YouTube channel named Avlod Media, which has more than 350k subscribers.

He became very popular on social media for his fight with Hasbulla Magomedov. But the fight was postponed by the Russian Dorf Athletics Association (RDAA).

The association was of the view that fighting with a singer is not justified. Rozik is going to be a contestant on Colors TV channel’s popular Indian television show Bigg Boss 16 in 2022.

Abdu had a disease called Rickets since childhood. Due to this disease, there is a deficiency of ‘Calcium’ and ‘Vitamin D’ in the body, due to which the size of the body does not increase and the height remains low.

Along with this, the bones also become weak due to this disease, due to which the growth of height stops, this is the reason that the height of Abdu Rozik stopped increasing and the age kept increasing. Due to financial constraints, the family could not get him treated properly.

Now he will be seen in the year 2022 in the Hindi version of Colors TV’s popular show Bigg Boss 16 along with rapper Mc Stan and Sajid Khan and many more.

Rozik is a Tajik singer who has the record name of being the world’s smallest singer. Abdu is 19 years old in 2022 and his height is just 3 feet 1 inch which is 95 centimeters.

His weight is just 18 kg. As a child, Rozik was suffering from a growth hormone deficiency, rickets. Due to the non-recovery of the gardener, he could not be treated.

Rozik was born in Gishdarva, Tajikistan to a middle-class Islam family. His whole family believes in the religion of Islam and also offers Namaz for Allah.

Abdu Rozik’s father’s name is Savriqul Muhammed he is a gardener by profession. Rozik’s mother’s name is Rooh Afza. Apart from his parents, Abdu has 2 brothers and 2 sisters in his house. His marital status is still unmarried.

However, in an interview, he revealed that he had a girlfriend.

Abdu Rozik’s total net worth is more than about $ 250,000. His earnings source is his program and music. Apart from this, he is involved in Bigg Boss 16 as a contestant where he is being given a fee of ₹ 2.5 lakh every week.

Some Interesting Facts About Abdu Rozik:

I am excited and nervous but I can’t wait to embark on the next chapter of my life with Bigg Boss 16. Being short and small used to be such a hindrance as people always underestimated my aptitude. People always bad-mouthed me as being the unfortunate child of God and mocked me for my disability throughout my childhood, but now look where I have reached today.”Abdu Rozik in Bigg Boss (2022)

This is the full details on Abdu Rozik Biography, Age, Height, Net Worth, Girlfriend, Family & More. Share this post with your friends and keep visiting us on celebwale.com for famous personalities and trending people’s biography with updated details. If you have any thoughts, experiences, or suggestions