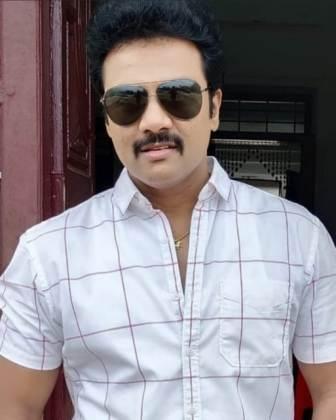 Sanjeev Venkat is a South Indian actor known for his role as Selvam in the Sun TV serial Thirumathi Selvam. He is participating as a contestant in Bigg Boss Tamil 5 in 2021, due to which he is in limelight. Sanjeev was born on 28 September 1975 in Chennai, Tamil Nadu. His full name is Sanjeev Venkatasubramanian.

He completed his early education at a school in Chennai itself. After that Sanjeev did his graduation in Visual Communication from Loyola College located in Chennai. He was a very good friend of Tamil superstar actor Thalapathy Vijay during his college studies.

Vijay was also studying Visual Communication from the same college during that time, due to which both Sanjeev and Vijay became close friends. Sanjeev had an interest in acting from the beginning, due to which he chose the path of acting after completing his graduation. He made his debut in the Tamil industry in the year 1989 with the Tamil film Ponmana Selvan. In most of the films, he played the supporting role of Vijay’s friend.

Despite working in many serials, he was not getting the recognition of the industry for which he is known, but in the year 2007, the serial Thirumathi Selvam started on Sun TV made him popular in every household. The serial ran for 7 years in which Sanjeev played the lead character of Selvam for the first time on TV. He became known as Selvam in Tamil households, which made him quite popular among the Tamil audience.

Apart from working in TV and films, Sanjeev has also done many reality shows. He started his career by anchoring in the dance competition show Maanada Mayilada released in the year 2007, which was telecasted on the Kalaignar TV channel.

Apart from this, he has won awards like Vivel Chinnathirai Award, Tamil Nadu State Television Awards, and Sun Kudumbam Viruthugal respectively in the category of Best Actor for his best acting performance in the TV serial Thirumathi Selvam.

Sanjeev Venkat’s age is 46 years old in the year 2022. Talking about his fitness, he exercises regularly to maintain his fitness. Apart from this, he also resorts to yoga and meditation so that he can be physically and mentally strong.

Sanjeev Venkat’s height is 5 feet 9 inches, which is equal to 175 centimeters. Venkat’s body weight is about 70 kg, he takes a proper diet to keep his body fit so that his body measurement is 38-34-10. His eye color is Black, and his hair color is also Black.

Sanjeev was born in a prosperous Hindu family. His entire family believes in Hinduism and worships Hindu deities. Sanjeev Venkat’s father’s name was Venkata Subramanian and his mother’s name was Shamala. Sanjeev’s mother Shamala was the sister of famous actress Manjula Vijay Kumar.

Apart from his parents, Sanjeev had a younger sister named Sindhu in his house. Sanjeev’s sister Sindhu was a well-known actress, mainly known for working in South Indian films. Sindhu married Kannada film actor Raghuveer in the year 1995.

Sindhu also has a daughter named Shrea. While campaigning door to door for the fund, Sindhu contracted a lung infection which led to her death a few days later. After the death of his sister, Sanjeev took all the responsibility for his daughter on himself.

Shrea was just 9 years old when her mother Sindhu died in 2005. Talking about Sanjeev’s marital status, he is married and has two children named Laya and Adhav. Sanjeev’s elder daughter Laya was born in May 2010 and his younger son Adhav was born in April 2014.

Sanjeev’s wife’s name is Preeti Srinivasan and is a leading actress in the television industry. Sanjeev and Preeti met on the sets of a serial where Sanjeev fell in love at first sight. After this, both of them started dating each other and eventually tied the knot in the year 2009. Thalapathy Vijay is a close friend of Sanjeev in the industry. Apart from this, Deepak Dinkar and Shreekumar are his close friends in the television industry.

Talk about the total net worth of Sanjeev Venkat, their net worth is around ₹7 crores. The main way of their earning is by acting in TV shows and serials. Apart from this, Sanjeev has worked in a supporting role in many Tamil films. For which he charges a lot of money.

Wikipedia has also covered Sanjeev on its page. He is also present on Twitter where he shares his thoughts with his 160k followers through tweets. In the table below, we have shared with you the links of all their social media platforms, by clicking on which you will be able to access their profile page directly.

Some Interesting Facts About Sanjeev Venkat:

This is the full details on Sanjeev Venkat Age, Family, Wife, Biography, Net Worth & More. Share this post with your friends and keep visiting us on celebwale.com for famous personalities and trending people’s biography with updated details. If you have any thoughts, experiences, or suggestions regarding this post or our website. you can feel free to share your thought with us.