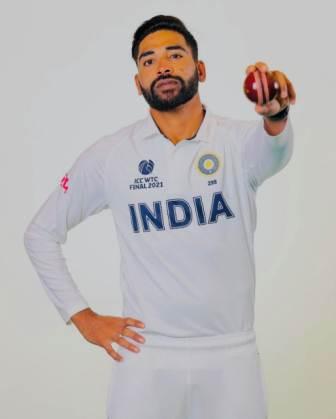 Mohammed Siraj is an Indian international cricketer who plays for Hyderabad in domestic cricket and for Royal Challengers Bangalore in Indian Premier League tournaments. He is a right-arm fast bowler.

Siraj was born on March 13, 1994, in Hyderabad. His father was an auto-rickshaw driver and his mother is a housewife.

He finished his schooling at Safa Junior College, Nampally, Hyderabad. Thereafter, he quit his study and did not pursue further. He gave his entire time to honing his cricketing skills.

During the 2016-17 Ranji Trophy tournament, he emerged as the highest wicket-taker for Hyderabad with 41 wickets at an average of 18.92.

Siraj became the leading wicket-taker in the 2017-18 Vijay Hazare Trophy tournament that took place in February 2018. In that tournament, he took 23 wickets in seven matches.

He bowled back-to-back maiden overs during Indian Premier League matches on October 21, 2020, and became the first bowler to do so in the history of IPL.

On January 15, 2019, he made his One-day international debut against Australia at the Adelaide Oval. Against Australia, Mohammed Siraj made his test debut as well on December 26, 2020.

Mohammed Siraj’s age is 28 years in the year 2022. He is a brilliant fast bowler of the Indian cricket team who has contributed many times to India’s victory with his performance. He is a fast bowler for whom fitness is an important role. To keep himself fit, he exercises for hours in the gym, apart from this he also works hard in the field.

Keeping in mind the fitness, BCCI has also kept a yoyo fitness test for joining Team India. Which is very important for every player to pass. Many fitness parameters have been set in this test, which players have to pass. He cannot join the Indian team without passing the Yoyo fitness test.

Mohammed Siraj’s height in feet is 5 feet 10 inches, which is 178 centimeters. His bodyweight is 67 kg and Siraj’s body measurement is 38-31-12. His eye color is Black and his hair color is also Black.

Siraj was born in a very poor Muslim family. His family follows the Muslim religion and also offers prayers in the dargah for Allah. Mohammed Siraj’s father’s name is Late Mohammed Ghouse, who was a rickshaw driver and her mother’s name is Shabana Begum, who earlier worked in the house of others.

His father Ghouse passed away in November 2020 last year. A week later, Siraj left for the Australian tour. He did not even get a chance to spend time with the family in the hour of grief after the departure of his father. But he paid tribute to his father by giving India a historic win against Australia.

Apart from her mother in Siraj’s house, there is also an elder brother named Mohammed Ismail. His elder brother is a software engineer and he also manages all social media and work of Siraj. Talking about the marital status of Mohammed Siraj, he is already engaged.

He revealed that he got engaged to her fiancé in June last year. When he was on a tour of Australia earlier this year, her fiancée supported and encouraged him a lot. Now he is going to marry him soon. However, her name of her has not been disclosed yet.

Talking about the total net worth of Mohammed Siraj, his total net worth is around ₹20 crores to ₹25 crores. He is a talented young right-arm fast bowler from Hyderabad who has represented India in all formats of cricket. Siraj has been playing domestic cricket for Hyderabad State since 2015.

In domestic cricket, he attracted the attention of IPL team owners with his scintillating bowling performance. After which in the year 2017, he was bought by the IPL team Sunrisers Hyderabad for ₹2.6 crores. In the following year 2018, he was included in his team by Royal Challengers Bangalore at the same price, since then he has been the main bowler of the RCB team’s bowling attack.

Be it domestic cricket or IPL or international cricket, he has impressed everyone with his performance. Although Siraj is not yet on the central contract list of the Board of Control for Cricket in India (BCCI), he continues to play competitive international cricket for India on a pay-per-match basis. He made his Test debut on 26 December 2020 against Australia in Melbourne.

With the inclusion of the Test team, he was hopeful that the BCCI would give him a central contract, which would further increase his earnings. But the BCCI, while not doing so, has included him in the team only on the basis of match payment. Mohammed Siraj is currently paid a fee of ₹15 lakh for a test match and ₹6 lakh for an ODI match and around ₹3 lakh for a T20 match.

Since 2015, Siraj has featured in the Hyderabad cricket team as a regular player in the four-day, ODI, and T20 formats respectively, in the Ranji Trophy, Vijay Hazare Trophy, Syed Mushtaq Ali Trophy, for which he was paid a few lakh rupees.

He is known to live a luxurious and stylish life with expensive cars like BMW to travel around. Mohammed Siraj was gifted a Mahindra Thar by Mahindra Group owner Anand Mahindra for his performance after his historic win against the Australian team on Australian soil last year.

Wikipedia has also covered Siraj on its page. He has a verified account on Twitter where a total of more than 43k people are connected to him. In the table below, we have shared the links of all their social media profiles with you, by clicking on which you will be able to access their profile page directly.

Some Interesting Facts About Mohammed Siraj:

This is the full details on Mohammed Siraj Age, Family, Wife, Biography, Net Worth & More. Share this post with your friends and keep visiting us on celebwale.com for famous personalities and trending people’s biography with updated details. If you have any thoughts, experiences, or suggestions regarding this post or our website. you can feel free to share your thought with us.