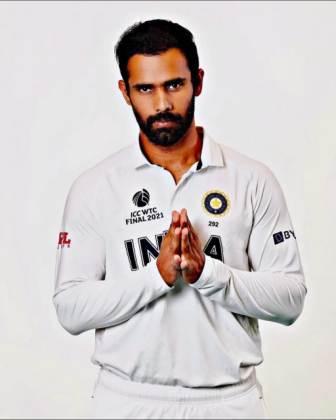 Hanuma Vihari is an Indian International cricketer who plays for Andhra Pradesh in Indian domestic cricket. He is a right-handed batsman and at times right-arm off-break bowler. Vihari was a member of the Indian under-19 cricket team that won the ICC under-19 cricket world cup in 2012 in Australia.

Hanuma was born on October 13, 1993, in the coastal town of Kakinada, Andhra Pradesh, India. But due to falling in love with cricket at the age of 5, Hanuma forced his parents to shift to Hyderabad. There he started training at the academy of the late Nagesh Hammond. But he was unable to pursue the training due to a lack of money.

He then met John Manoj of St. John’s Academy where he saw Vihari’s potential and was impressed. But it was very difficult for his family to afford Hanuma’s cricket and education so Manoj, being the school’s sports director, approached the management of St Andrews School where he was successful in getting Hanuma admitted to the school.

Meanwhile, when Hanuma turned 12, he lost his father. However, due to his huge investment in cricket, Vihari returned the day after his father’s death and contributed significantly to his school’s victory with an innings of 80 runs. His performance for Hyderabad in the Ranji Trophy is commendable. In the 2013-14 Ranji Trophy, he was the leading scorer for Hyderabad.

Hanuma played for Sunrisers Hyderabad in the sixth edition of IPL in 2013. In October 2017, He scored his first triple century while playing against Odisha in the 2017-18 Ranji Trophy. In this series, he emerged as the leading run-scorer for Andhra Pradesh.

He was bought by Delhi Capitals in 2019 during the IPL auction. Later on, ahead of the 2020 IPL, he was released by Delhi Capitals. In April 2021, he was signed by Warwickshire County Cricket Club for County Championship which is scheduled to take place in 2021.

In August 2018, he was included in the Indian Test Squad for the final two tests against England. He made his international test debut on September 7, 2018, against England. In that match, he scored his maiden half-century and dismissed Alastair Cook with the bowl.

He has not played any One Day International cricket and T20 international cricket for India as of 2021. He is the only test player for the Indian Cricket team and his highest score in the test is 111 against Westindies. He also has played for some different teams like Hyderabad, India U19, India U23, India A, Sunrisers Hyderabad, India B, India Blue, India, Delhi Capitals, and Warwickshire.

Hanuma Vihari’s age is 29 years old in the year 2022, he is one of the leading all-rounders of the Indian Test team, who based on his excellent performance helped India win the Test series for the first time on Australian soil. Apart from being a batsman, he is a great bowler and fielder. He has taken many excellent catches in his fielding and has saved many runs for the team with excellent fielding.

Ever since BCCI made it necessary to pass the Yoyo fitness test to join Team India, every player works hard on his fitness. Vihari also does a variety of exercises in the gym for hours to maintain his fitness so that he can stay fit. Apart from this, he also works hard on the field, which helps him to stay fit and gain form.

To keep his body healthy and fit, he also pays special attention to his diet and takes only nutritious things in food. Apart from this, he also consumes fruit juices so that he can stay healthy. Hanuma Vihari’s height in feet is 5 feet 9 inches, which is 178 centimeters. His bodyweight is 65 kg and Vihari’s body measurement is 36-30-13. His eye color is Black and his hair color is also Black.

Vihari was born in a poor Hindu family. His entire family believes in Hinduism and also worships Hindu gods and goddesses. Hanuma Vihari’s father’s name is Satyanarayan Gade and his mother’s name is Vijayalakshmi Gade. But when Hanuma was at the age of 12, he lost his father. Apart from his mother in Hanuma’s house, he also has a sister named Vyshnavi Gade.

His mother Vijayalakshmi Gade runs a clothing shop in Hyderabad and she is the one who has brought up Vihari. Whatever a Vihari is today, it is only because of his mother. Talking about Hanuma’s marital status, he is married, he married his longtime girlfriend Preethiraj in the year 2019. Hanuma Vihari’s wife’s name is Preethiraj Gade and they do not have any children yet. Both are very happy in their married life and keep sharing their photos on social media.

Talking about the total net worth of Hanuma Vihari, his net worth is around ₹10 crores. His main source of earning comes from playing in Test matches for India. The BCCI has divided its contracted players into four categories, Grade A+, Grade A, Grade B, and Grade C, who are given different annual packages. Hanuma Vihari has been placed in the Grade C category by BCCI which means that he gets ₹1 crore annually to play for India.

A total of ₹3.80 crores has been earned from playing in the IPL editions of the years 2013, 2015, and 2019. He also has a BMW car. Apart from this, he gets a salary from Andhra Cricket Association by playing domestic cricket for Andhra. Vihari also has endorsement deals with Daniel Wellington and Swedish watch brands from which he earns handsomely.

Wikipedia has also covered Hanuma Vihari on its page. Apart from this, he also has a verified Twitter handle from which he expresses his views. He has more than 140k followers on his Twitter account. In the table below, we have shared with you the links of all their social media profiles, by clicking on which you will be able to access their profile page directly.

Some Interesting Facts About Hanuma Vihari:

This is the full details on Hanuma Vihari Biography, Age, Height, Cast, Father, Family, Wife, Net Worth & More. Share this post with your friends and keep visiting us on celebwale.com for famous personalities and trending people’s biography with updated details. If you have any thoughts, experiences, or suggestions regarding this post or our website. you can feel free to share your thought with us.