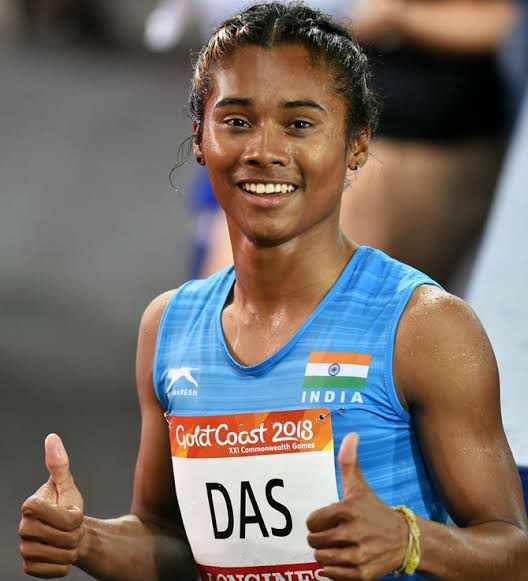 Hima Das was born on 9 January 2000 in Kandhulimari village, Dhing, Nagaon Assam. She belonged to a Dalit family and her father somehow managed the livelihood of the family members by cultivating rice. Her childhood education was from the government school in the village. Since childhood, Hima was unable to continue her studies due to her interest in sports and she started focusing on sports. Since her childhood, Hima played football with the village boys in the fields, which helped them to get Stamina.

She started running on the advice of Shamsul Haq, who is a PT teacher of Jawahar Navoday Vidyalaya. Shamsul Haq identified him with Gauri Shankar Rao of Nagaon Sports Association. In the year 2017, when Hima came to participate in a camp in the capital Guwahati, she won the gold medal in the 100 and 200 meters, despite not having good shoes. Then she got the eye of coach Master Nippon Das says that it was the month of January.

Hima came to the capital Guwahati to attend a local camp. The way she was running on the track, I felt that this girl could go further. The coach then went to meet his parents in Hima’s village and asked him to send Hima to Guwahati for better coaching. Her parents said that they could not afford Hima’s stay and coaching in Guwahati but he also wanted to see his daughter moving forward.

In this difficult situation, only they found a way out. They further say that I spoke to Hima’s parents and told them that I will bear the cost of Hima’s stay and coaching expenses in Guwahati, just you give her permission to come out. He then agreed to send Hima out.

After getting the parents’ permission, Hima came to Guwahati, where the coach, Nippon Das prepared Hema to get into football from athletics, initially she prepared for 200 meters but later realized that Hima will be more successful in 400 meters and she started running 400 meters.

Hima Das made headlines overnight by winning a gold medal at the World u20 Championship 2018, Finland. Hima Das won the gold medal in the 400-meter race by taking 51.46 seconds. She was followed by Andrea Miklos of Romania with 52.07 seconds and Taylor Manson of America with 52.28 seconds. Das continued a similar performance at the 18th Asian Games in Jakarta. In 2019, she made the entire nation’s name in the world by winning 5 gold medals in 19 days.

She attributed her success to coach Nippon Das and her parents. She told that wherever she is today is due to her hard work and coach Nippon Das. Who got Hima trained for the international level in such a short time and prepared her for the championship. Hima Das is a brilliant athlete as well as now she has also become DSP in Assam Police. Assam Chief Minister Sarbananda Sonowal formally appointed Hima to the post of Deputy Superintendent of Police on 26 February 2021.

She joined the elite club with Indian athletes after winning the Gold Medal! Like Seema Punia, Navjeet Kaur Dhillon, and Neeraj Chopra, she has emerged as a figure whose success has reached the pinnacle of popularity overnight! His coach Nippon Das was confident that his pupil would be included in the top three at least. Now in the 400-meter race, she has made her strength iron in the whole world.

She was also honored by the Arjuna Award, which is the best award in the category of sports given by the Government of India.

Hima Das has brought laurels to the country by winning a gold medal in the 400 meters race on Saturday in Nove Mesto, Czech Republic. He took 52.09 seconds in this race competition, although these speeds are less than his best speed so far. From 2 July 2019 to 22 July 2019, Hima has made the country proud by winning gold medals 5 times in various competitions held in Europe.

For the fourth time on 17 July, he won a gold medal in the 200 meters at the Tabor Athletic Meet, making it his fifth gold medal this month. This is Hima’s best performance after the Asian Athletics Championships in April, in which Hima had not completed the 400 meters race, after which she has now participated in the 400 meters race.

Hima Das’s age is just 22 years old in 2022 and she is one of the strong athletics in the world who belongs to Nagaon, Assam. She works hard to keep her body fit and practice daily. Hima Das’s height is 5 feet 6 inches, which is 168 cm. Her bodyweight is 54 kg and Hima’s body measurement is 32-26-32. Her eye color is dark brown and her hair color is black.

Das was born into a poor Hindu family and belongs to a scheduled cast, she believes in Hindu beliefs and she worships all the Hindu goddesses. Hima Das’s father’s name is Ronjit Das, but he is a poor farmer in Nagaon Village and does farming in the field. Hima’s mother’s name is Jomali Das.

Apart from Hima and her parents in the family, Hima has 1 younger brother named Basanta Das and have 2 younger sisters named Rinti Das & Barsha Das. Hima’s marital status is still unmarried and her husband’s name is unknown. She is a strong Indian International Athletics who has 4 coaches in her life named Nippon Das, Nabajit Malakar, Galina Bukharin & Elina.

Assam Chief Minister Sarbananda Sonowal formally handed over a letter of appointment to international athlete Hima Das on Friday, 26 Feb 2021 for the post of Deputy Superintendent of Police. Das has been appointed under the state’s Integrated Sports Policy’. She was given an appointment letter at the Saruszai Sports Complex here. The Chief Minister also gave appointment letters to the newly recruited 597 sub-inspectors in Assam Police.

He greeted the newly appointed sub-inspectors and their families on the occasion. To encourage the youth to take up sports as a career, the State Government implemented the Integrated Sports Policy. Sonowal said, “The state government has appointed Sprinter Hima Das as Deputy Superintendent of Police in Assam Police because she has made the state proud with her achievements on the national and international scene.”

Some Interesting Facts About Hima Das:

This is the latest information on Hima Das Biography, Age, Height, Father, Family, Husband, Net Worth & More. Share this post with your friends and keep visiting us on celebwale.com for famous personalities and trending people’s biography with updated details. If you have any thoughts, experiences, or suggestions regarding this post or our website. you can feel free to share your thought with us.