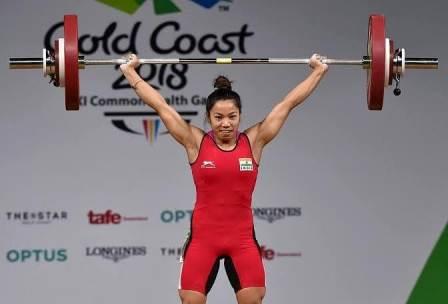 Mirabai Chanu is an Indian weightlifter who has made India proud by winning medals in games like Asian Games, Olympic Games, Commonwealth Games, etc. They say that there is no shortcut to success, after that when we get success, then we feel proud. India’s weightlifter Mirabai Chanu won a silver medal in 49 kg weight at Tokyo Summer Olympics 2020. The moment when she played her last bet, the lives of crores of Indians rested on him. PM Modi has also congratulated him on her success today.

This journey of India’s weightlifter Mirabai Chanu has not been so easy. Today, many years of struggle and hard work are hidden behind this success. Mirabai Chanu was born on 8 August 1994 in Nongpok Kakching village, 20 km from Imphal, Manipur. She is the youngest of her 5 siblings. Mirabai belongs to the state of Manipur.

Due to not being financially able, Mirabai had to go to the mountains to collect wood with her brother Makhom Sanatoba Meite. Her family recognizes her strength at an early age when she could easily bring home a large bundle of firewood from the mountains. While his elder brother had faced trouble lifting the bundle.

During that time her age was 10 to 12 years. She had her early education from primary school in her village. Due to no weightlifting center in her village, Mirabai used to travel 44 km daily for her training. She had said about her training that “the coach had given us a diet chart in which chicken and milk was an essential part. But due to her family situation, she could not afford it every day.”

She used to dream of becoming a weightlifter since childhood. She told that her idol is Kunjarani Devi. When she was young, she saw Kunjarani Devi on TV while lifting weights. Her game was very attractive and astonishing how she is lifting such heavyweights. So she also told her parents that “I want to do it, very reluctantly they agreed. In our state, you can compare Kunjarani to weightlifting and Sania Mirza to tennis.“

At the age of 11, Mirabai won her first competitive gold medal at her local weightlifting competition. Her real weightlifting journey began in 2011 when she participated in the 2011 International Championships and the South Asian Junior Games, winning gold medals in these games. In 2013, she participated in the Junior National Championship in Guwahati, India where she was awarded the Best Lifter Award.

The following year, in 2014, she represented India at the Commonwealth Games in Glasgow. She won the silver medal in this sport in the women’s section of 48 kg lifting a total of 170 kg and qualified for the Rio Olympics 2016. Mirabai Chanu, who won India’s flag on the strength of her ability in the country and the world, was honored by the Indian Railways on 31 August 2015 by giving her appointment letter as a senior ticket collector.

She failed to finish the event as she did not have a successful lift in any of her 3 attempts in the clean and jerk section of weightlifting at the Rio Olympics 2016 and did not win any medals at this Olympic Games. In the year 2017 at the 2017 World Weightlifting Championships held in the United States of California, India won the gold medal after 22 years in the women’s 48 kg category by lifting a total of 194 kg.

She then represented India at the 2018 Commonwealth Games and won the first gold medal for India in the women’s 48 kg category on 5 April. He lifted a total of 196 kilograms, breaking the previous weightlifting record set by Augusta Novacolo of Nazriya in 2010 at 175 kilograms.

Chanu lifted 86 kg in the snatch at the Asian Championships Games in Tashkent, Uzbekistan, and then lifted 119 kg in clean and jerk to set a world record by lifting a total of 205 kg, giving India a bronze medal and a ticket to the Tokyo Olympics.

Mirabai Chanu’s age is 28 years old in the year 2022. She is one of the best female weightlifting players from India. She has given India many medals in international sports based on its performance. To be successful in international sports, a lot of hard training, gym, and hard work are required, which Chanu strictly follows.

Apart from this, she follows a lot of hard work and strict diet rules to keep her body fit, so that she can perform well in sports. She regularly consumes green vegetables, milk, and fruits in her diet.

Mirabai Chanu’s height is 4 feet 11 inches which is 150 centimeters and her body weight is 49 kg which is 108 lbs. Chanu’s body measurement is not known and her eye color is black and her hair color is Dark Brown.

Chanu was born in a middle-class Hindu family. The entire family of Chanu worships Hindu deities and believes in Hinduism. Mirabai Chanu’s father’s name is Saikhom Kriti Meite who is an employee in the Public Works Department (PWD). Her mother’s name is Saikhom Ongbi Tombi Leima who is a shopkeeper.

Apart from her parents, a total of 5 siblings live in Chanu’s house. She is the youngest of her siblings, her elder brother’s name is Maikhom Sanatomba Meitei. Talking about Chanu’s marital status, she is still unmarried. She doesn’t have an affair with anyone. She is completely focused on her game at the moment. Her coach and mentor are Vijay Sharma. Coach Vijay Sharma also gives coaching to Mirabai Chanu in the Olympics 2021.

Mirabai Chanu (49kg) created history by winning a silver medal on the second day of the Tokyo Olympics on Saturday. Chanu became the first Indian athlete to win a medal at the Tokyo Olympics this year. After winning the medal, Mirabai expressed her desire to eat pizza.

She had said in a special conversation with NDTV that she has not eaten her favorite food for months. After winning the medal, Mirabai said, ‘I haven’t had pizza for months.’ After this comment from Chanu, Domino’s India has offered Mirabai free pizza for a lifetime.

Domino’s wrote on Twitter, ‘Many congratulations to you on bringing home the medal. You have fulfilled the dreams of over a billion Indians. What can be more gratifying is that we can give you free pizza for the rest of your life. Congratulations again.

Mirabai Chanu’s account is present on all social media platforms, where she keeps sharing her pictures and short videos of sports with her followers. Chanu is present on Instagram where she has more than 294k followers and her number of posts is around 200. She is also present on Facebook where she is followed by around 51k followers.

Chanu’s Twitter account is verified so that users can easily connect with her. She has about 115k followers on her Twitter account. Apart from this, Wikipedia has also covered them on their page. In the table below, we have shared with you the links of all their social media platforms, by clicking on which you will be able to directly access their profile page.

Some Interesting Facts About Mirabai Chanu:

Disclaimer: All images are available on the Mirabai Chanu Official Instagram Account. Images can be taken from her official Instagram account for educational purposes. Image credit goes to the respective owners of the image creator.

This is the full details on Saikhom Mirabai Chanu (Weightlifter) Biography, Age, Height, Parents, Family, Religion, Net Worth & More. Share this post with your friends and keep visiting us on celebwale.com for famous personalities and trending people’s biography with updated details. If you have any thoughts, experiences, or suggestions regarding this post or our website. you can feel free to share your thought with us.