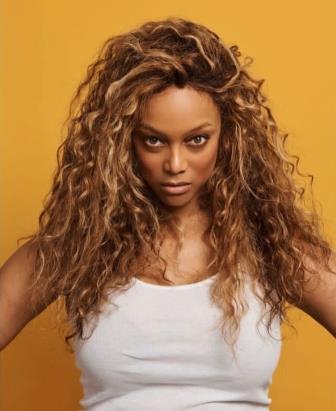 Tyra Banks is an American television personality, model, producer, and actress who is popularly known as a television host. She was born on 4 December 1973 in Inglewood, California, the U.S. She completed her early education at John Burroughs Middle School.

After that, in 1991, she completed her graduation from Immaculate Heart High School in Los Angeles. Since childhood, she was interested in modeling. She started modeling when she was in school at the age of 15. She was rejected by 4 modeling agencies before she was signed by LA Models.

At the age of 16, she turned to Elite Model Management where she got an opportunity to model in Europe. She went to Milan where she booked 25 shows at the 1991 Paris Fashion Week. She Elle; Harper’s Bazaar, Spanish Vogue; She has also appeared on the cover pages of magazines such as Cosmopolitan, Seventeen, and Teen Vogue.

She has walked the ramp in fashion shows for many brands like Chanel, Anna Sui, Christian Dior, Donna Karan, Calvin Klein, and Perry Ellis.

Apart from this, she has been a part of advertising campaigns for many brands like Dolce & Gabbana, Escada, Tommy Hilfiger, Ralph Lauren, Halston, H&M, XOXO, Pepsi, and Nike. She is one of the few black models to have achieved supermodel status.

She came back to America in the mid-1990s so that she could do more and more commercial modeling. Banks began her television career in 1993 with the fourth season of the American show The Fresh Prince of Bel-Air, in which she played Jackie Ames.

After that she appeared in many television shows like All That, New York Undercover, Just Shoot Me, MADtv, Felicity, America’s Next Top Model, The Tyra Banks Show, Shake it up, and FABLife.

She started her career as an actress in 1995 with the role of Deja in the American film Higher Learning. After that, she appeared in films like Love Stinks, Love & Basketball, Coyote Ugly, Halloween: Resurrection, Larceny, and Life-Size 2.

Tyra was born into a prosperous family. Tyra Banks’ mother Carolyn London (now London-Johnson) is a medical photographer and her father Donald Banks is a computer consultant. She also has an elder brother in her family whose name is Devin Banks. Devin is 5 years older than Tyra.

In 1979, when Tyra was just 6 years old, her parents got divorced. Banks said that while growing up, she was teased for her ugliness as an ugly duckling. In 2010, Tyra was in a relationship with a Norwegian photographer, Erik Asla. The two also dated each other during that time and in January 2016.

Tyra became the mother of a biological child through surrogacy. The name of the son of Tyra Banks is York Banks Asla.

Tyra Bank’s net worth is around $90 million. She is an American supermodel who has earned more than $50 million from different brands of advertising in her career spanning 35 years.

Currently, she is seen as a host or judge on TV shows. She charges around $150,000 per episode. Apart from this, she has properties in different cities in America.

Some Interesting Facts About Tyra Banks:

This is the latest information on Tyra Banks’s Biography, Wiki, Age, Height, Father, Family, Husband, Marriage, Shows, Marriage, Boyfriend, Networth & More. Share this post with your friends and keep visiting us on celebwale.com for famous personalities and trending people’s biography with updated details. If you have any thoughts, experiences, or suggestions regarding this post or our website. you can feel free to share your thought with us.