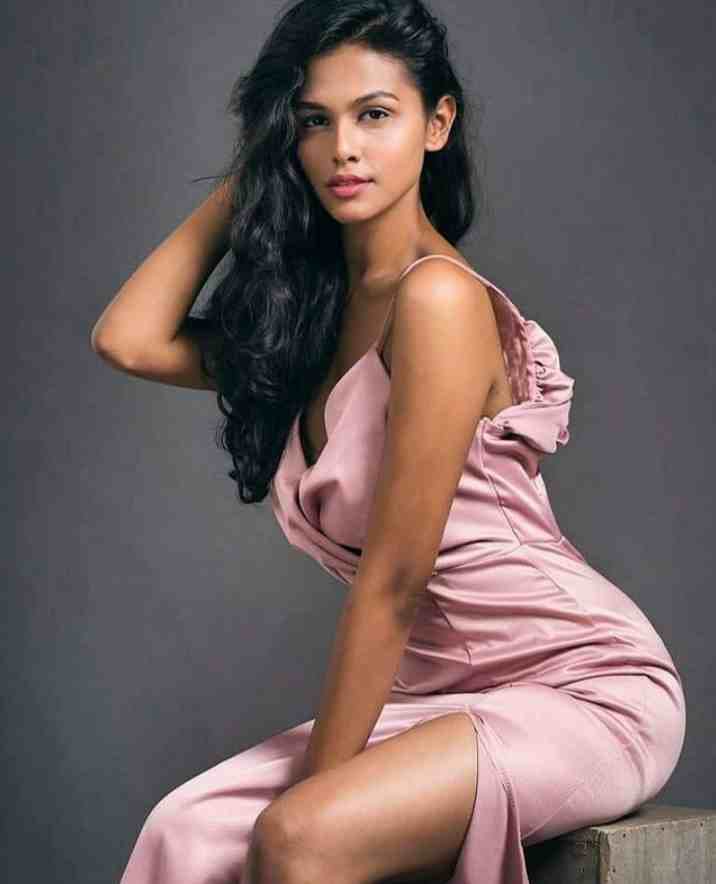 Adline Castelino is an Indian Model and beauty pageant titleholder. She was born on 24 July 1998 in Kuwait City, Kuwait to Mangalorean Catholic parents. Her family is originally from Udyavara in Udupi, Karnataka. Castelino full name is Adline Mewis Quadros Castelino.

She got enrolled in Indian Central School in Kuwait. She came back to India when She was fifteen years of age. Eventually, She moved to Mumbai. Castelino finished her schooling at St. Xavier’s High School, Mumbai.

Subsequently, She graduated from Wilson College in Business Administration. She speaks three languages fluently. She is proficient in Hindi and English besides her mother tongue Konkani.

After finishing her graduation, She started pursuing her career in Modelling. She left no stone unturned in that field. Apart from working as a model, She had also participated in an online pageant in 2018.

Further, Adline continued her training for pageants in Mumbai through the Cocoaberry Training Academy. Castelino won the title of Miss Cocoaberry Diva in 2019 held by that institution.

in 2019, Adline took part in an audition for Miss Diva 2020 and She auditioned in Chennai. Her name was shortlisted as a finalist at the end of the audition. A sports round is conducted in Miss Diva 2020.

She went through that round at Bennet University and won the title of Miss smasher for her performance in badminton.

Finally, On 22 February 2020, Castelino grabbed the title of Miss Diva 2020 and She was crowned by the previous year’s winner Vartika Singh at Yash Raj Studio, Andheri, Mumbai.

A Question asked during the finale of the competition in the Question and Answer round by the host Malaika Arora: Does religion Unite or Divide people? Castelino answered that:

“Religion definitely unites people. It has values that bring people together. People believing in the same things come together and stay in harmony, but what divides us, is us. Humans divide each other. Religion doesn’t divide anyone. When I first came here from Kuwait, I really loved the fact that in India, all religions coexist in harmony. We celebrate Diwali, Christmas, Eid all together and what a beautiful scene that is, that we can stay together and respect each other’s beliefs. We can progress with each other and forward to the future.”

The crown winner of Miss Diva Universal 2020, Adline Castelino represented India at the Miss Universe 2020 which was held on 16 May 2021 at Seminole Hard Rock Hotel & Casino, Hollywood, Florida, in the United States of America.

Andrea Meza of Mexico won the title of Miss Universe 2020, whereas Castelino ended up as the 3rd runner-up.

When a Question is asked during the competition finale Question Answer round by Jury Members that:

“Should countries lockdown due to COVID-19 despite the strain on their economies or should they open their order and risk a potential increase in infection rates?”

In her beautiful answer she said:

“Good evening Universe. Well, coming from India and for what India is experiencing right now, I have come to realise something very important. Nothing is more important than the health of your loved ones. And you have to draw a balance between economy and health. And that can only be done when the government works with the people hand in hand and produces something that will work with the economy.”

The same year she also appeared in a documentary series of the Kingfisher Calendar. Castelino is also a social worker who is very active. She has raised her voice in the support of the farmers in the agricultural sector.

She works closely with a welfare organization called Vikas Sahyog Pratishthan VSP to provide a sustainable livelihood for farmers, and to curb the increasing suicides and inequality of farmers.

In addition, it has also raised funds for the Child Help Foundation through a crowdfunding platform called KETTO and also serves to make the LGBT community aware of its acceptance.

In the year 2020, during the lockdown imposed due to the epidemic of pervasive Covid, she started working for an NGO Desire Society caring for HIV-infected children in India where she helped to provide essential items such as food supplies, sanitisers, and face masks.

Adline Castelino’s age is 24 years old in 2023 and she is a very beautiful actress & model in the Indian industry. She does regular yoga and exercise in the gym to keep her body fit, which makes her body look very attractive.

Along with being an actress, she is also a model for which she has to take great care of her fitness. To keep her body healthy, she also consumes green vegetables daily and regularly takes fruit juice.

Castelino was born in a Mangalorean Catholic family in Kuwait City, Kuwait but her hometown is in Karnataka. She believes in Christian beliefs as well as follows the religion of Christianity.

Adline Castelino’s father’s name is Alphonse Castelino and her mother’s name is Meera Castelino. Her parent’s nationality is Indian and they belong to a small village Udyavara in Udupi, Karnataka, India.

Adline Castelino’s marital status is still unmarried but She has an affair with someone. But there is no detail available related to her boyfriend.

Talking about the net worth of Adline Castelino according to sources, she is charging around ₹5 lakh to ₹7 lakh for advertisements. Apart from this, her earnings source is through ads, music videos, and modelling. The main sources of her earnings are advertising and modelling.

Adline Castelino is available on all social media accounts. She is present on Instagram where she has more than 128k followers in 2021 and she is also available on Twitter & Facebook where she has more than 2k and 4k followers respectively. She keeps sharing her latest pictures on Instagram with her fans. Apart from this, she is also covered by Wikipedia.

In the below table, we provide all the social media account links of Adline Castelino, where you can directly access her social media profiles by clicking on the given link.

Some Interesting Facts About Adline Castelino:

This is the full details on Adline Castelino Biography, Miss Universe 2020 Runner Up, Age, Height, Parents, Family, Net Worth & More. Share this post with your friends and keep visiting us on celebwale.com for famous personalities and trending people’s biography with updated details. If you have any thoughts, experiences, or suggestions regarding this post or our website. you can feel free to share your opinion with us.