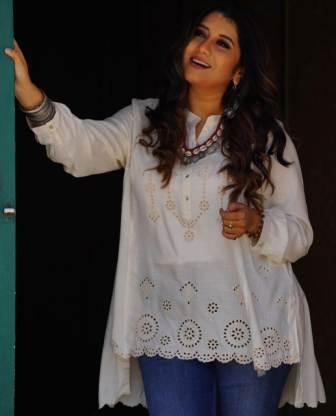 Priyanka Deshpande is a television presenter, host, and actress who is famous in the Kollywood television industry for her anchoring. She was born on 28 April 1990 in Karnataka. She received her early education in Karnataka itself. Her father died when Priyanka was in the 7th standard, after which she managed herself in some way and completed her studies. After this, she completed her senior secondary education at St. Anthony’s School, Chennai.

After passing the intermediate examination, Priyanka joined Ethiraj College for Women from where she earned a Bachelor of Business Administration (BBA) degree in Visual Communication. Priyanka had no intention of becoming an anchor. Interestingly, Priyanka started her career as a host by mistake. A close anchor friend of his was not available for some time. She stepped into the show temporarily and hosted the show for a few days. Eventually, she became a full-time anchor.

She made her debut and career by hosting the show This Chirpy Girl which aired on the Zee Tamil channel in the year 2009. Apart from this, she was seen as a host in Zee Tamil shows Azhagiya Penne, Isai Unplugged, Glimpse. She has hosted the Chutti TV show Daddy my Hero, Sun Music show Mami’s Dayout, and Sun Tv show Suriya Vanakkam.

In 2015, the makers of Star Vijay approached Priyanka as the host for the show Cinema Karam Coffee along with co-anchor Ma Ka Pa Anand. She dazzled the show with her comic sense and witty demeanor, which brought Priyanka to fame and success.

Deshpande had successfully hosted Star Vijay’s shows, especially Super Singer Junior, Super Singer 6, 7, and 8 as well as many more. She started her career as a judge in the Tamil show Kalakka Povathu Yaaru along with other veteran comedians Vaiyapuri and Aarti which was aired on Vijaya Tv in 2015. In 2019, Priyanka started her own show Start Music on Star Vijaya which aired Season 1 and Season 2 in which she hosted as a solo.

In both these short films, she appeared with film actor Vignesh Karthick. Apart from this, she has hosted the international reality show The Wall with Ma Ka Pa Anand. Lyricist Mugabharthi approached Priyanka and offered her to make her debut as a playback singer for the song Madura Palapalakkudhu from the film Devarattam. She later approved the offer and sang the song with co-singers Nivas K Prasanna, Vijay Sethupati, and Niranjana Ramanan. She has been hosting the annual ceremony and award ceremony of Vijaya Television Awards since 2014.

Priyanka was awarded the Best Entertaining Star award by the Blacksheep Digital Awards in 2021 following the success of her YouTube channel. Also, she was nominated for Best Actress by the Femina Super Daughter Award. Priyanka Deshpande has been seen in Bigg Boss Tamil Season 5 in the year 2021 in which actors like Raju Jeyamohan, Ciby Chandran, Thamarai Selvi, Niroop Nandkumar, Pavani Reddy, Sanjeev Venkat, and Amir are seen with her.

Priyanka Deshpande’s age is 32 years old in the year 2022. Talking about her fitness, she takes great care of her fitness. She does different types of exercises in the gym to stay fit and also takes nutritious things in her food.

Apart from doing weight training in the gym, she also does many types of exercises. Priyanka also performs activities like yoga and pranayama for physical and mental strength. She also takes special care of her diet so that she can remain physically healthy.

Priyanka Deshpande’s height is 5 feet 4 inches, which is 163 cm. Her body weight is 68 kg and Deshpande’s body measurement is 34-30-36. Her eye color is Brown and her hair color is Black.

Priyanka was born in a middle-class Hindu family. His entire family believes in Hinduism and worships Hindu deities. Even before the birth of Priyanka, her parents had shifted from Maharashtra to Karnataka. Priyanka Deshpande’s father’s name was P Deshpande and now he is not in this world. Her father died when Priyanka was in the seventh standard. After this, his entire family shifted to Chennai.

Priyanka Deshpande’s mother’s name is Sunita P Deshpande. Apart from her mother in Deshpande’s house, there is also a younger brother named Rohit Deshpande. Talking about Priyanka’s marital status, she is married. Priyanka’s husband’s name is Praveen Kumar whom she married in the year 2016 after a long affair.

Apart from this, she also has a YouTube channel on which more than 1.38 million subscribers are present. Millions of views come on the videos uploaded on Priyanka’s YouTube channel, from which she earns lakhs of rupees per month.

Priyanka Deshpande also made a channel on Youtube named PriyankaDeshpandeYT, where more than 1.38 million subscribers are available. In the table below, we have shared the links of all her social media profiles with you, by clicking on them you will be able to access her profile page directly.

Talking about the awards and achievements of Priyanka Deshpande, so far she has been nominated for a total of 12 awards and has won a total of 6 awards. For the first time in 2016, Priyanka was awarded the Anand Vikatan Cinema Award in the category of Best Anchor Female for her anchoring in the Airtel Super Singer show.

Priyanka was awarded the Best Entertaining Star award by the Blacksheep Digital Awards in 2021 following the success of her YouTube channel. Also, she was nominated for Best Actress by the Femina Super Daughter Award. In the table below, we have given a list of all his awards and achievements, which you must read once.

Some Interesting Facts About Priyanka Deshpande:

This is the latest information on Priyanka Deshpande Age, Family, Husband, Biography, Net Worth & More. Share this post with your friends and keep visiting us on celebwale.com for famous personalities and trending people’s biography with updated details. If you have any thoughts, experiences, or suggestions regarding this post or our website. you can feel free to share your thought with us.