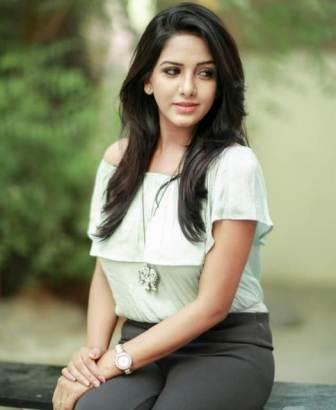 Pavani Reddy is an Indian model and actress who works in the Tamil and Telugu TV and film industries. She was born on 9 November 1988 in Durga Village, Udupi, Karnataka. She completed her early studies in Udupi, Karnataka. After this, she shifted with her family to Hyderabad where she completed her graduation. Since childhood, she was not interested in anything other than making a career in acting. Taking her step toward acting, Pavani started modeling after completing her college studies.

Desperate to work in the film industry, Pavani tried hard for acting opportunities. She even gave many auditions with a passport size photograph. After all the efforts, she finally got a chance to play a supporting role in a Bollywood film. She started her film career with the Bollywood film Login released in the year 2012. In the film, she played her supporting character very well, for which she was also praised. After making her Bollywood debut, in the same year 2012, Pavani Reddy made her debut in the Telugu film industry with the Telugu film Double Trouble.

In the year 2021, Pavani was seen in the Telugu film Senapathi. While working in films, she also got an opportunity to work in the television industry. Pavani Reddy made her debut in the Telugu television industry in 2014 by playing the character of Anasuya in the Telugu serial Neneu Aayana Aruguru Athalalu which was aired on Zee Telugu. After this, she worked in the Gemini TV serial Agnipoolu and E TV serial Naa Peru Meenakshi in the same year 2014.

Later in 2018, she made her debut in the Malayalam television industry by playing the character of Rani in Malayalam serial Neelakkuyil, which was aired on the Asianet channel. Pavani Reddy is seen in Bigg Boss Tamil Season 5 in the year 2021 in which actors like Raju Jeyamohan, Ciby Chandran, Thamarai Selvi, Niroop Nandkumar, Priyanka Deshpande, Sanjeev Venkat, and Amir are seen with her.

Pavani Reddy age is 33 years old in the year 2022 and is a very fit artist of South Industry. Talking about Pavani’s fitness, in addition to jogging, dancing, and walking, to keep herself fit, she keeps doing various types of cardio so that she can stay fit.

Apart from doing weight training in the gym, she also does many types of exercises. Pavani also performs activities like yoga and pranayama for physical and mental strength. She also takes special care of her diet so that she can remain physically healthy.

Pavani was born in an upper-middle-class family. His entire family believes in Hinduism and worships Hindu deities. Pavani Reddy’s father’s name is not known and her mother’s name is also not known. Apart from her parents in Pavani’s house, there are also 2 sisters named Sindhu Reddy and Roshni Reddy. Talking about Pavani’s marital status, she is married but her first husband has died. Pavani Reddy’s first husband’s name was Pradeep Kumar and she loved him very much.

The two met for the first time on the sets of a film where Pavani fell in love with Pradeep at first sight, after which they both started dating. Later both of them fell in love after which Pavani told her parents about her relationship with Pradeep Kumar but she ran away after the parents refused. After this, they started working on TV and both got a chance to play the lead pair together in a TV show. Later, after being in a relationship for four years, Pavani and Pradeep got married.

They got married on 14 February 2017 on Valentine’s Day. However, their marriage did not last long and Pradeep committed suicide in May 2017 after an argument with Pavani. After this, in an interview, Pavani broke down while talking about her first husband Pradeep Kumar. Recalling that fateful day, Pavani revealed that.

“I don’t see it as a clash. It’s just a misunderstanding. Even my elder brother was in the house at that time. After the argument, I went to the bathroom saying, ‘You don’t like Me!’, Locked the door from inside, and kept crying. I didn’t step out even after he knocked on the door. Then, He broke the glass with his hand out of anger, and that’s why there are bloodstains.

That’s when I came out and said, ‘I don’t want violence.’ After that, Pradeep went to the room and locked it from inside. As he didn’t step out though he had shooting in the early morning, I knocked on the door, but there is no response. So, We broke the door and found him hanging.”

After this incident, Pavani went to her hometown and took a break from shooting for a few months. During the wonderful time spent with her first husband Pradeep Kumar, Pavani had also become pregnant but after Pradeep committed suicide, she had an abortion. A few months later, she got a call for the show Chinna Thambi, which made him return to the TV industry once again. Slowly everything started getting better and her condition had also become quite normal. After this, his affair started going on with Anand Joy.

Pavani and Anand were family friends and both have known each other since childhood and were very serious about their relationship. In July 2019, Pavani Reddy decided to have a second marriage with her boyfriend Anand Joy but due to some reasons, they could not get married. Pavani also opened up about her recent heartbreak. She shared how her second relationship didn’t work out with Anand. Pavani is deeply saddened by her failed marriages

“Actually, I feel that I am not destined to have a married life. I fear a lot about living alone in this world. It seems I am destined to stay alone. Due to this, I was getting into depression again. During this juncture, I got the chance to be part of Bigg Boss and that’s how I am part of the show now.”

Pavani is also covered by Wikipedia on its page. Apart from this, she is also present on Twitter where she keeps sharing her thoughts through tweets with more than 6k followers. In the table below, we have shared the links of all her social media profiles with you, by clicking on them you will be able to access her profile page directly.

Talking about the total net worth of Pavani Reddy, her net worth ranges from around ₹3 crores to ₹5 crores. Pavani’s main source of earning is acting in films and television serials. She charges around ₹10 lakh to ₹15 lakh for her role in a film. Apart from this, she charges around ₹20k to ₹25k per episode for working in serials. In 2021 she is seen as a contestant in Bigg Boss Tamil 5 where she is charging around ₹2 lakh per week. Pavani also posts sponsors of brands like Daniel Wellington and Vatika on her social media account for which she charges a lot of money.

Some Interesting Facts About Pavani Reddy:

This is the latest information on Pavani Reddy Biography, Age, Family, Husband, Net Worth & More. Share this post with your friends and keep visiting us on celebwale.com for famous personalities and trending people’s biography with updated details. If you have any thoughts, experiences, or suggestions regarding this post or our website. you can feel free to share your thought with us.