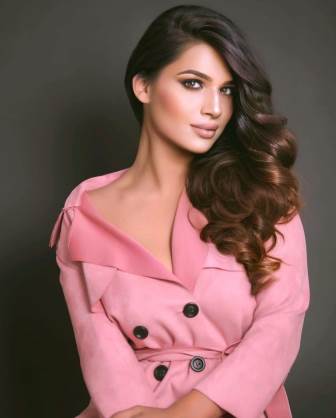 Naina Singh has been a state-level champion table tennis player who was born on 04 March 1994 in the Moradabad district of Uttar Pradesh. She comes from a middle Hindu class family whose family later shifted to Nainital from where she took her school education and later moved to Mumbai to make her dream come true.

In her school time, she loves to play all kinds of sports including cricket, football, basketball, volleyball. She has been completed her schooling at Don Bosco Public School, Nainital, Uttarakhand.

After that, she completed her graduation at Kumaun University, Nainital. Naina was motivated by her mother to learn acting skills and set a career in the television industry. She has been an assistant casting director before participating in MTV Splitsvilla.

Where she modeled and made a career in the television industry. In 2017, she won the title of Splitsvilla 10 with his partner Bashir Ali and in the same year she worked in a music video titled “sundowner”.

In 2018, she participated in Star Plus’ reality show “India Next Superstar” where she was a finalist in that reality show.

Then in 2019, she got the role of Rhea Mehra, the daughter of Rockstar Abhi (Shabbir Ahluwalia) in the Zee TV serial Kumkum Bhagya, which she left after playing the role for a few days.

And then she has participated in Colors TV’s popular reality show Bigg Boss 14 in this year 2020.

Naina Singh belongs to the state of Uttar Pradesh. She is so young at the age of 25 years, a beautiful hot actress, with an attractive personality and has a perfectly shaped body.

Naina is a state-level table tennis player and she is an athlete, who follows a strict diet rule to keep herself fit and fine and healthy and to maintain her body figure.

She has beautiful long dark brown hair color and black eyes. Naina is known for her adorable looks with her cute smile and her body shape is 34-26-34.

She comes from a middle-class Hindu family. Her family includes her father Kapil Kumar and mother Shakti Bhal, a fashion designer and businesswoman. Naina’s mother encouraged Naina to pursue a career in modeling and television.

Naina Singh’s mother Shakti was no longer in this world, she died on 6 February 2022 at the age of just 51 years. Remembering him, Naina has expressed her condolences on social media and wrote that “Maa please come back. My brain is numb, my heart is crying and my eyes are tired.”.

She has only one younger brother, his name is Rohan. Naina is not married yet, but she has an affair with Akash Choudhary, with whom many of her pictures are available on social media.

Although Naina’s childhood was spent in Moradabad, Uttar Pradesh, but she did her schooling till the 10th standard from Don Bosco Public School, Nainital.

After that, she also studied 12th at Don Bosco Public School Nainital and received her graduate degree from Kumaon University, Nainital. She later shifted to Mumbai to make a career in the modeling and TV industry.

Talking about Naina’s favorite things, she loves to work or you can say that her dream is to work with the famous director Rohit Shetty. Naina Singh’s favorite actors are Shahrukh Khan & Johnny Depp.

Among actresses, there are no details available about her favorite actresses on the public platform. She has also been a state-level table tennis player, so her association with the sports world.

Her favorite sport is football and she is the biggest fan of Leo Massey. She loves to travel and read books in her free time.

Here are given the username of various social media platforms of her Instagram, Facebook, and Wikipedia links. Her Instagram photo which was extremely hot and sexy has gone viral.

She was honored in the best female debut category of the Zee Rishtey Award 2019 and also the winner of the International Iconic Award 2021.

Some Interesting fact About Naina Singh:

Ans. No, she is not married

Q. Who is Naina Singh’s sister?

Ans. Naina doesn’t have any sisters. However, she has a cousin sister named Kajal Singh.

This is the latest information on Naina Singh Age, Husband, Biography, Family, Sister, Net Worth & More. Share this post with your friends and keep visiting us on celebwale.com for famous personalities and trending people’s biography with updated details. If you have any thoughts, experiences, or suggestions regarding this post or our website. you can feel free to share your thought with us.