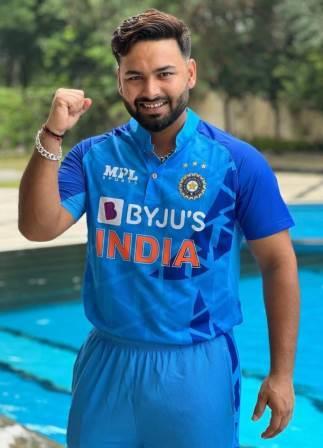 Rishabh Pant is an Indian international cricketer who bats in the middle order for India. He is a left-handed wicket-keeper batsman who plays for Delhi in domestic cricket and represents Delhi Capitals in the IPL. He was born on 4 October 1997 in Roorkee, Uttarakhand. Rishabh Pant’s full name is Rishabh Rajendra Pant. He was fond of cricket since childhood.

At the age of just 12, he used to travel to Delhi by train with his mother so that he could take training from coach Tarak Sinha at Sonnet Cricket Academy. In Delhi, Rishabh and his mother used to stay at a Gurdwara in Moti Bagh as there was no suitable accommodation for them in the city. Coach Sinha advised him to play for Rajasthan but to no avail.

He played under 14 and under 16 home matches for Rajasthan but faced discrimination for being an outsider in the team. After this, he decided to play for Delhi to save his cricket career. Pant was then instructed by his mentor to change his entire batting technique. After this, he started playing Delhi Under 19 cricket. The turning point of his career came when he scored 35 runs in the first innings and 150 in the second innings against Assam while playing for Delhi.

In the Under 19 Cricket World Cup on 1 February 2016, Rishabh proved to be a flamboyant batsman by scoring a half-century in just 18 balls against Nepal. Pant made his first-class debut in the 2015/16 Ranji Trophy. Pant scored 308 runs in an inning against Maharashtra in the 2016/17 Ranji Trophy. In doing so, he became only the third young Indian to score a triple century in an inning in first-class cricket.

In the Ranji Trophy on 8 November 2016, he scored the fastest century in just 48 balls while playing against Jharkhand in the match of Delhi. He was selected as the captain of Delhi in the 2016–17 Vijay Hazare Trophy in February 2017. Pant was bought by the Delhi Capitals team in the 2016 Indian Premier League, and since then he has been associated with the Delhi team till now. He is currently captain of the Delhi Capitals in the IPL.

In his debut test match itself, he recorded a strange record in his name. He could not open his account even after facing 29 balls in his debut match, due to which he joint the longest duck for India in a Test match along with Suresh Raina and Irfan Pathan. Then made his ODI debut for India against West Indies on 21 October 2018. He is currently involved as a wicket-keeper batsman in all three cricket formats of the Indian team.

Rishabh Pant had a horrific car accident this morning on 30 December 2022 at Narasan in Roorkee while coming from Delhi to Dehradun. In which he was seriously injured. According to eyewitnesses, his car was blown to pieces. Rishabh was trying to get out of the car but was unable to leave due to his critical condition. Then they somehow got out of there on their own.

Then 2 youths admitted him to Roorkee’s Saksham Hospital where he is said to be out of danger. After this, Pant was admitted to Max Hospital in Dehradun. According to reports, Rishabh left for Dehradun in his Mercedes car from Delhi at 12 o’clock in the night.

He was alone in the car and due to his doze in the early morning, his car hit the divider. The speed of the car was so fast that the testicles of his car flew away. Thankfully Rishabh survived safely.

Pant was born in the Kumaoni Hindu family of Haridwar. His entire family believes in Hinduism and worships Hindu deities. Rishabh Pant’s father’s name is Rajendra Pant. Pant’s father died of cardiac arrest in 2017. Pant’s mother’s name is Saroj Pant. Apart from her mother in his family, there is also an elder sister Sakshi Pant.

His marital status is still unmarried. Rishabh Pant is often seen with his girlfriend Isha Negi on many occasions. Before this, he had an affair with model and Bollywood actress Urvashi Rautela. Both have clashed with each other many times on social media.

The total net worth of Rishabh Pant is more than ₹ 70 crores. He has been included in the Grade A list of players of BCCI, for which he gets an annual salary of ₹ 5 crores. Most of his net worth comes from IPL salary and brand endorsements. He was bought by Delhi Capitals in 2016 for ₹1.9 crores. After that, Delhi retained him for ₹ 8 crores in the 2018 IPL auction.

Once again in the IPL auction 2022, Delhi Capitals paid him ₹16 crores while retaining him. He endorses several brands including JSW Steel, Nike, Syska, Boost, and Boat. He has an expensive car collection like Audi A8, Mercedes-Benz c-class, Mercedes-Benz GLE, and Ford Mustang.

Some Interesting Facts About Rishabh Pant:

This is the full details of Rishabh Pant Biography, Age, Height, Father, Family, Gf, Wife, Net Worth & More. Please share this post with your friends and keep visiting us on celebwale.com for famous personalities and trending people’s biography with updated details. If you have any thoughts, experiences, or suggestions regarding this post or our website. you can feel free to share your opinion with us.