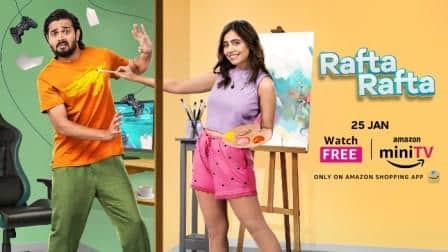 Rafta Rafta, a new web series on Amazon Mini TV has been announced. In this web series, Bhuvan Bam, one of the most popular YouTubers in the country, will once again be seen in the lead role.

His previous web series Taaza Khabar was streamed on the OTT platform Hotstar, which received a lot of love from the audience. This time he will be seen in the role of Karan in the new show Rafta Rafta of Amazon Mini TV web series.

Along with her, actress Shrishti Ganguly Rindani will also be seen in the lead role of Nithya in the web series. The story of the web series Rafta Rafta revolves around a newly married couple.

In this mini TV web series, viewers will be shown their relationship and their behavior and reactions in different situations. The trailer of the series has also been launched, in which Karan and Shrishti are planning to go somewhere, but this planning is not so easy for them.

Viewers will get to see a total of 7 episodes in the Rafta Rafta web series, which will be released on 25 January 2023 on the OTT platform Amazon Mini TV.

This is the latest information on Rafta Rafta (Amazon Mini Tv) Web Series Cast, Release Date, Story, Review, Wiki & More. Please share this post with your friends and keep visiting us on celebwale.com for famous personalities and trending people’s biography with updated details. If you have any thoughts, experiences, or suggestions regarding this post or our website. you can feel free to share your thought with us.