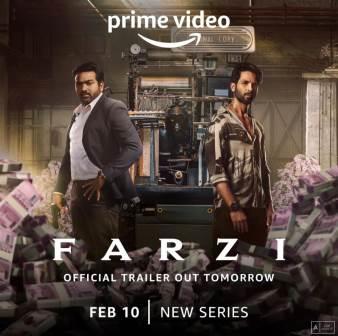 Amazon Prime has announced the release date of its new web series named Farzi. Shahid Kapoor is going to make his debut in the world of OTT with the web series ‘Farzi’.

He has played the character of Sunny in this web series who cheats on people with the help of technology.

This web series is directed by Raj & DK, the directors of Amazon Prime’s famous series The Family Man 1 & 2. The fake web series will be released on Amazon Prime Video on February 10, which will have a total of 8 or 9 episodes.

This is the latest information on Farzi’s (Prime Video) Release Date, Cast, Trailer, Review, Collection & More. Share this post with your friends and keep visiting us on celebwale.com for famous personalities and trending people’s biography with updated details. If you have any thoughts, experiences, or suggestions regarding this post or our website. you can feel free to share your thought with us.