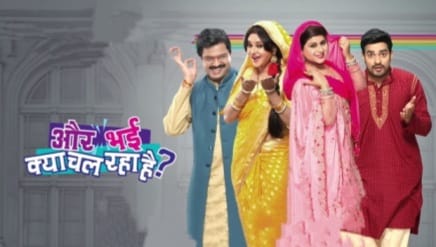 Aur Bhai Kya Chal Raha Hai is a new comedy show of &TV which is being telecasted from Monday to Friday at 9:30 PM on &TV from 30th March 2021. Set in the backdrop of Lucknow, this serial is the story of the partition of a haveli. There is a wall standing in the middle of this haveli and on one side the Mirza family lives and on the other side the Mishra family. This comedy-packed serial enthralls the audience by showing the sweet noises of the Mishra and Mirza family.

Mishra’s family and Mirza’s family live in the same mansion. Mishra runs a paan shop and Mirza runs a tea shop. While both are seen together, there is a different level of competition going on between their wives. The wives of both come up with new ways to show themselves above each other. Apart from all this, two more funny characters are an important part of this serial – Bittu, and Pappu. Both Mishra and Mirza spend 24 hours trying to rob and take possession of the mansion.

Apart from all this, Simran Awasthi is playing the role of Paro Maid. Talking about the TRP rating of the show, this serial is giving tough competition to another serial on &TV, Bhabhi Ji Ghar Par Hai. The serial ‘Aur Bhai Kya Chal Raha Hai‘, which started four months ago, is overshadowing Bhabiji Ghar Par Hain. The serial Aur Bhai Kya Chal Raha Hai is produced by Amjad Hussain Sheikh under his production house Shade Productions. This show is getting a very good response. All the stars are famous for their different style.

This is the full details on Aur Bhai Kya Chal Raha Hai (& TV) Cast, Real Name, Story, Time, Release Date, Promo & More. Please share this post with your friends and keep visiting us on celebwale.com for such an entertaining post. If you have any thoughts, experiences, or suggestions regarding this post or our website. you can feel free to share your thought with us.