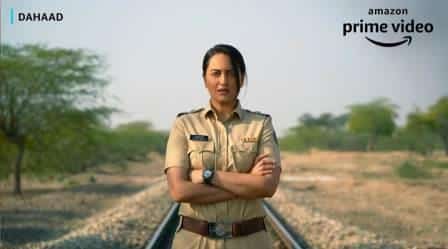 Amazon Prime Video has announced a new web series named Dahaad. In the series, Bollywood actress Sonakshi Sinha is going to make her debut on the OTT platform in the role of police officer Anjali Bhaati. This series is mainly based on the murder of women in a small town in Rajasthan.

In the series, several women are found mysteriously dead in a public toilet, which is investigated by Sonakshi Sinha in the role of police sub-inspector Anjali Bhaati. The women’s deaths initially appear to be a suicide, but as the case progresses, Anjali realizes the presence of the serial killer.

After this, the cat-and-mouse game starts between the police and the killer. In this series of 8 episodes, apart from Sonakshi Sinha, actors like Vijay Verma, Gulshan Devaiah, Sohum Shah, Yogi Singha, Sanghamitra Hitaishi, and Ratnabali Bhattacharya will be seen in important roles.

This is the latest information on Dahaad (Prime Video) Release Date, Cast, Web Series, Story, Trailer, Review, Wiki & More. Please share this post with your friends and keep visiting us on celebwale.com for famous personalities and trending people’s biography with updated details. If you have any thoughts, experiences, or suggestions regarding this post or our website. you can feel free to share your thought with us.