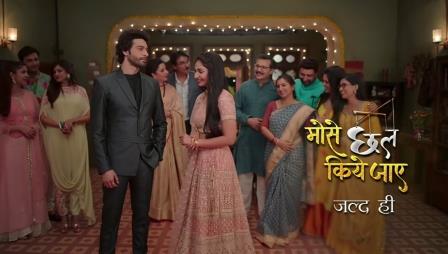 Mose Chhal Kiye Jaaye tv serial is an Indian drama television serial. The promo of this serial has been released. The promo is getting a lot of love and support from the audience. The promo of the show features Vijender Kumeria ie Armaan Oberoi who is a famous TV producer. He asks for a simple girl Soumya’s hand for marriage.

Soumya is an aspiring writer played by Vidhi Pandya who aspires to fulfill her dream of becoming a successful and accomplished writer in life. Saumya is unaware of her marriage when her sister comes to her and informs her about her proposal of marriage from famous TV producer Armaan Oberoi.

Soumya asks Armaan in their first meeting that why do you want to marry me only when you have many more options to marry good girls. Responding to Soumya’s question, Armaan says that it is her simplicity that attracts her towards her.

Soumya then tells Armaan about her dream of becoming a proficient writer. Armaan lies to her that she can fulfill her dream even after marriage. Unaware of Armaan’s intention to be just a housewife, Soumya agrees to marry Armaan.

This serial will be aired on Sony TV from 7th February 2022 at 9:00 pm from Monday to Friday. Recently, the promo of the serial was released, which is being liked by the audience a lot.

Many artists have worked in this, the list of which is given below.

This is the full details on Mose Chhal Kiye Jaaye (Sony TV) Serial Cast Name, Roles, Start Date, Telecast Time, Wiki, New Serial & More. Share this post with your friends and keep visiting us on celebwale.com for such an entertaining post. If you have any thoughts, experiences, or suggestions regarding this post or our website. you can feel free to share your thought with us.