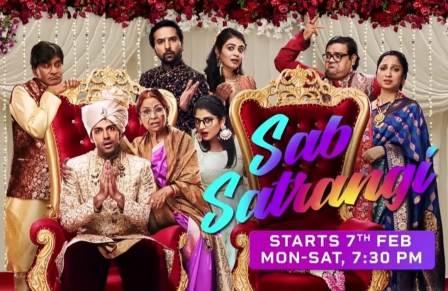 Serial Sab Satrangi is a new Hindi television serial that will be telecast from 7th February 2022 on the Sony SAB channel at 7:30 PM. The serial is mainly based on Mankameshwar, a resident of Lucknow, who is also affectionately known as Manu. Manu is a good-hearted person, who believes in doing good to the people.

He is an optimistic person who does not give up hope despite the adversity and troubles of life. Manu is her grandmother’s darling, who is the head of the family. Actress Jayshree Arora plays the role of Manu’s grandmother who is a successful life insurance agent even at the age of 73.

The story of this serial begins with Manu’s wedding, the preparations for which are going on in full swing in the Maurya family. Adding to the fun of this family is Daya Shankar Pandey who plays Manu’s father Shyam Babu. Shyam Babu aspires to become a magician and is working hard to fulfill his dream.

Actor Puru Chhibber is also making a comeback to television with the show and will play Manu’s elder brother Deepu Bhaiya in the show. Actor Satyajit Sharma will be seen in the role of local don and dad Khushwa in the serial Sab Satrangi.

This is the full details on Sab Satrangi (SAB TV), Serial Story, Cast, Wiki, Release Date, Timing & More. Share this post with your friends and keep visiting us on celebwale.com for such an entertaining post. If you feel any thoughts, experiences, or suggestions regarding this post or our website. You can feel free to share your thoughts with us.