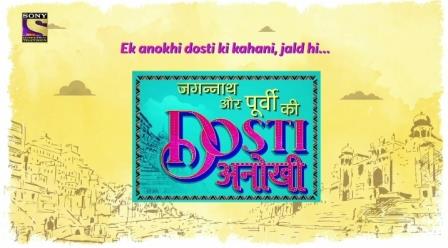 Jagannath Aur Poorvi Ki Dosti Anokhi is a brand new show airing on Sony TV which is based on the unique friendship of Jagannath and Poorvi. Jagannath is a senior citizen who is spending his old age in Varanasi with his wife. He has built a beautiful house of his own by working all his life. Following their responsibilities, they have made their children capable and made them stand on their feet.

But despite all this, he is alone in his life and is living on the memories of his children. Living alone, his nature has become irritable. Seeing the children living in the neighborhood playing, he gets irritated and reprimanded. Jagannath is spending his life with his wife like this.

Only then does Poorvi enter his life. Poorvi is drowning in the river, to save Jagannath jumps into the water. Poorvi steps into the lonely life of the old couple and sparks a new relationship with them. The story of this serial is mainly based on the unique friendship emerging between a young girl Poorvi and senior citizen Jagannath which looks quite interesting when seen in the promo.

Apart from this, Many artists have worked in this, the list of which is given below.

Here is the promo of Dosti Anokhi.

This is the full details on Jagannath Aur Poorvi Ki Dosti Anokhi (Sony Tv) Cast, New Show, Serial Cast, Start Date, Timing, Wiki & More. Share this post with your friends and keep visiting us on celebwale.com for such an entertaining post. If you have any thoughts, experiences, or suggestions regarding this post or our website. you can feel free to share your thought with us.