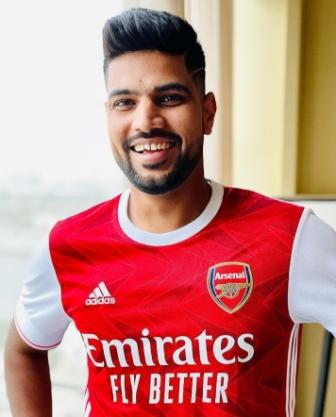 Lalit Yadav is an Indian 3-dimensional player who is known for his attacking batting, off-spin bowling, and excellent fielding. Since childhood, Lalit, who grew up watching Virender Sehwag’s batting on TV, has always wanted to grow up to be an attacking batsman. Lalit, who considered explosive batsman Sehwag as his idol from the beginning, was born on 3 January 1997 in the village of Najafgarh, New Delhi.

After being born in the middle class, Lalit did his initial schooling at Delhi Public School located in Dwarka, after which he did his graduation from Swami Shraddhanand College, affiliated with Delhi University. His academic career was also brilliant but his love for cycling, swimming, and cricket forced him to make a career in cricket.

After this, his father supported him and got him admitted to the Sporting Cricket Club of Najafgarh. Lalit Yadav was a wicket-keeper batsman in the early days of his career but due to his poor wicket-keeping style, coach Amit Vasistha advised him to bowl apart from batting, after which he developed himself as an aggressive batting all-rounder.

In this way, he started working on his game and increased his batting ability but he was disappointed every time as he kept getting selected every time in first-class tournaments. During his struggling days, Lalit did not give up and maintained his passion for the game. His hard work soon paid off and once he hit 6 sixes in 6 balls in a DDCA League T20 match.

He got some recognition for his exploits, but after this Lalit, once again repeating this feat at the Kotla ground, hit 6 sixes on 6 balls, which attracted everyone’s attention. This moment proved to be the turning point for his career and the next morning he got a call that he had been selected for Delhi’s Ranji team, after which he went to join Delhi’s state team.

Lalit Yadav made his debut for Delhi on 15 February 2018 in the Vijay Hazare Trophy against Mumbai. In this match, he scored a brilliant half-century and led his team to victory by an innings margin. After this, the day finally arrived while playing Ranji when the team Delhi Capitals bought him in the IPL auction for his base price of ₹20 lakh and included him in the IPL.

He joined the IPL team Delhi Capitals in 2020 but he did not get a chance to play any match that year. But in the year 2021, the team Delhi Capitals once again showed their confidence in him and retained him, and made his debut against Rajasthan Royals in IPL 2021. After this, he has played in 7 IPL matches so far and is doing his best.

Lalit Yadav’s age is just 26 years old in the year 2023. He is a promising batsman from Delhi who has impressed everyone with his batting prowess. He also does not compromise on his fitness and works hard in the field. Lalit also sweats profusely in the gym and keeps doing various exercises to maintain his fitness. He is also known as a brilliant fielder who practices hard in the field, and who also saves many valuable runs for his team with his fielding.

His dream is to play for the Indian team one day for which he will have to set his own high fitness standards because to join the Indian team, not only your batting or bowling should be world-class but your fitness should also be of high level only then you can join Indian cricket. The BCCI has made it mandatory to pass a yoyo fitness test to be included in the Indian team in which you have to go through a few tests and pass them. Lalit also works a lot on his fitness and at all times tries to keep himself fit for the match.

To keep himself fit, apart from exercising in the gym, he also takes special care of his diet. He consumes green vegetables and salads in food and avoids eating oily things. Apart from this, he also consumes fresh fruits so that he can stay healthy. Lalit Yadav’s height in feet is 6 feet 2 inches, which is 188 centimeters. His body weight is 75 kg and Lalit’s body measurement is 40-32-14. His eye color is Black and his hair color is also Black.

Lalit was born in a middle-class Hindu family. His entire family believes in Hinduism and also worships Hindu deities. Lalit Yadav’s father’s name is Zile Singh Yadav and his mother’s name is not known. Apart from his parents, an elder brother also lives in Lalit house, whose name is Tarun Yadav.

His elder brother Tarun is married to Neelam Yadav and has 2 children. Talking about Lalit’s marital status, he is still unmarried, due to which the name of his wife is not known. He is more focused on his cricketing career due to which he does not have a girlfriend.

Talking about the total net worth of Lalit Yadav, their net worth is around ₹50 lakh. In the IPL 2020, Delhi’s team bought their base price for ₹20 lakh and after that, they have been retained at the same time in the year 2021. Lalit has earned a total of ₹40 lakh yet from IPL.

He also shares his and his family’s photos through his Instagram. Apart from this, there is no page on their Facebook but their account is present. There are many of their friends. If you want on their Facebook, they can send them a friend request. Lalit has done Wikipedia on his page and his account is also on Twitter, where there are around 1.5 followers. In the table below, we have shared links to all their social media profiles, which will be able to access their profile page by clicking.

Some Interesting Facts About Lalit Yadav:

This is the full details on Lalit Yadav (Cricketer) Biography, Age, Height, Family, Wife, Net Worth & More. Please share this post with your friends and keep visiting us on celebwale.com for famous personalities and trending people’s biography with updated details. If you have any thoughts, experiences, or suggestions regarding this post or our website. You can feel free to share your thought with us.